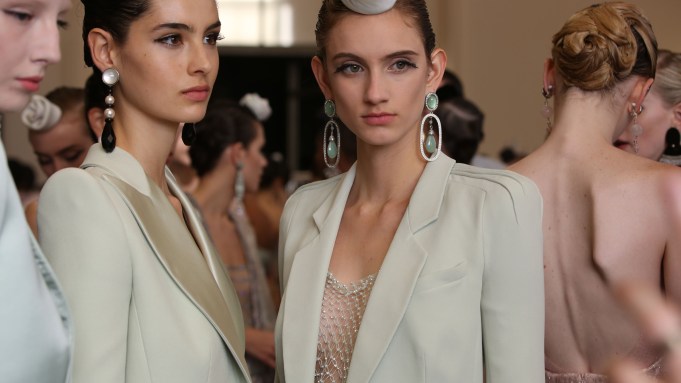 “It’s a very classic haute couture makeup,” explained Peter Philips, creative and image director for Christian Dior makeup. “I wanted to do a smoky eye that was not too sexy.”

Instead, he crafted one that was both “poetic” and “tough,” which didn’t extend all the way up to models’ eyebrows. “I left out the mascara,” continued Philips. “[Then] it becomes less about seduction. It’s more about a cloud of a shadow — it gives a different effect.”

Also at Dior, Guido Palau, working with Redken products, created a bun wrapped around with braids, which were woven along the side of models’ heads. “The side has a more youthful feeling, rather than being all scraped up,” he said, calling the plaits “super clean.”

Over at Armani Privé, makeup artists ironed false eyelashes all morning, pre-show. Linda Cantello, Giorgio Armani Beauty’s international makeup artist, said the designer “just wanted the focus to be on this very heavy eyelash that’s extended — not with a liner,” as is tradition, but instead with the lashes.

Referring to the lacquered twists she made curling around the back of models’ heads, Aldo Coppola hairstylist Roberta Bellazzi said: “We are re-creating a tattoo with the models’ hair, so each head is different. The result is something very wavy and unique.”

At Elie Saab a cat eye was in focus. “It’s a mix of black, a burgundy red and orange,” said makeup artist Tom Pecheux, of the color swept above models’ peepers.

Their tresses were piled high into a French twist. Stéphane Lancien parted hair in the middle and gave a high shine. “We want [it] to be very modern,” he said of the chignon, which had a messy flair.