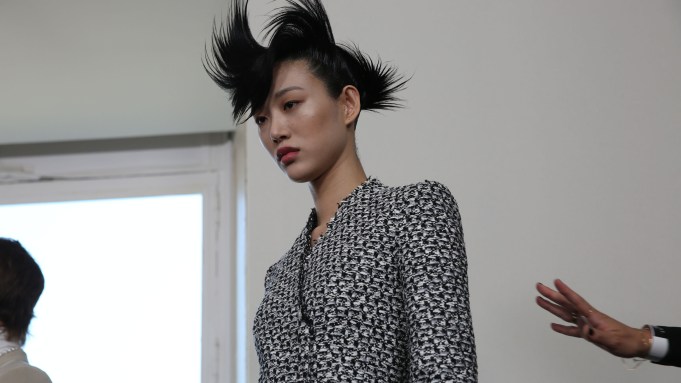 Gone are the days of one beauty look per couture show. This fall season, more made-to-measure makeup and hairstyles were displayed on fashion houses’ runways than ever before.

Prior to Jean Paul Gaultier’s show, makeup artist Erin Parsons presented to the designer a dual-chrome metallic product, like thin pieces of foil, she’d been saving for a special occasion.

“I showed him all the colors, and he matched them up to each outfit,” she said. “A lot of it will happen in the lineup.…So that’s what we’re all gearing up toward. It’s a magical look and very cool.”

Models without the high-shine eyelids were given a more nude makeup look. Also at Gaultier, hairstylist Odile Gilbert crafted coifs with a “proportion that goes with the clothes,” she said. Meanwhile, 15 models had their hair scooped up into high ponytails.

Most had hair twisted into a knot, while four sported graphic, spiky chignons. Guido Palau, working with Redken products, called this “bourgeois punk.” “It’s the idea of a rich girl, Stella Tennant, living in this house and being a sophisticated punk with all this bourgeoise-ness to it,” he said.