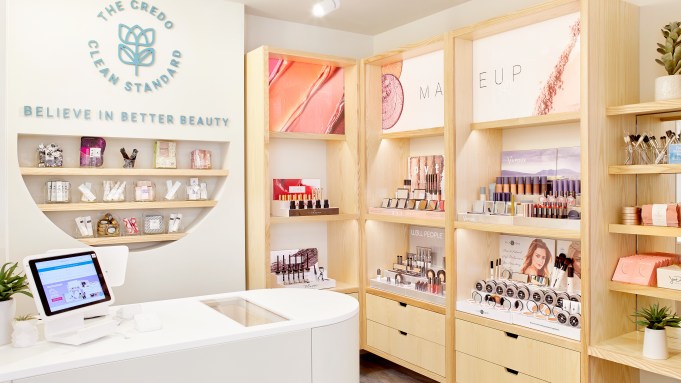 Beauty retailers seem to think so.

Both Sephora and Credo Beauty this week have unveiled plans to bolster clean makeup, despite a sluggish prestige makeup market — sales were down 7 percent in 2019, according to data from The NPD Group — and clean makeup’s small size relative to the rest of the category.

Sephora is expanding its Clean at Sephora program with an increased emphasis on color cosmetics. On March 12 the retailer began rolling out a front-of-store animation in all its U.S. doors, highlighting 11 makeup brands that have received the Clean at Sephora seal.  A digital component, also launched that day, features clean makeup. The LVMH Moet Hennessy Louis Vuitton-owned retailer has added new clean makeup brands to its roster in the past year, including Kosas and Tower 28, and worked with some of its bigger ones, including Bite Beauty and Tarte, on reformulating and repositioning.

Credo Beauty, the San Francisco-based retailer that specializes in clean beauty and that many in the industry have come to look to as a standard-bearer for ingredient policies, has teamed with celebrity makeup artist Katey Denno, who is known for using only clean products. Denno is joining the retailer’s Clean Beauty Council, its advisory board of industry experts, and will also serve as its brand ambassador and lead makeup artist, making appearances at events and on social media.

“Last year we started to see a bigger uptick in innovation and product development and launches and this year, there’s a noticeable shift in terms of new brands coming to market,” said Annie Jackson, cofounder and chief operating officer of Credo. “What you hear about in the industry in terms of sluggishness in color — that’s not what we’re experiencing.”

The numbers reveal that clean makeup brands still comprise only seven percent of prestige makeup, and the biggest brands with the most distribution are experiencing sales declines along with the rest of the category.

But within clean makeup, a stable of emerging brands with limited distribution — sold in only one or two major retailers, as defined by NPD — are growing, up 10 percent year-over-year.

“The big players in clean makeup are dragging down the smaller brands, but if you pull out the bigger players in the space, the growth is actually significant,” said Larissa Jensen, vice president and industry advisor at The NPD Group.

Jensen said consumer interest in clean skin care, which drove significant growth for the category, is due to eventually transfer to makeup.

“There’s going to be a point where consumers are putting clean skin-care on, and they’re not going to want to put [non-clean] makeup on top of that,” she said.

Until recently, clean makeup was a quiet category with not a lot of activity, and the majority of consumers were wary of the products not performing as well as those from conventional brands. But that’s changed, retailers say, as the newer brands create innovative products with high-performance, long-wearing formulations and sleek packaging that challenge the notion of clean makeup as health food store fodder.

Both Jackson and Cindy Deily, Sephora’s vice president of Skincare Merchandising who also oversees Clean at Sephora, cited the convergence of consumer demand with the emergence of innovative new brands and technology as the reason clean makeup is having a moment.

Clean has been in the market for a while, but has historically appealed to consumers who prefer a more natural look,” said Deily. Now you have founders like Annie Lawless — she’s really passionate about clean, but she’s a huge makeup junkie.”

Brands like Lawless Beauty, Kosas and Westman Atelier are changing the notion of what clean makeup looks like, and even more new brands are emerging quickly. Saie Beauty, billed as a luxury nontoxic line from a former Estée Lauder Cos. Inc. executive, in August raised a round of funding backed by Unilever Ventures and a slew of other investors. Industry veteran Amy Liu last year started Tower 28, which makes clean and eczema-safe products like the SuperDew Shimmer Free Highlighter and ShineOn Jelly Lip Gloss, which Sephora quickly scooped up.

Some of the newest clean makeup brands are growing the fastest.

California-based Kosas, for instance, grew 400 percent in 2019 following its launch into Sephora and a series of product launches that quickly turned into cult hits, such as the 10-Second Eyeshadow and Wet Oil Lip Gloss. The brand’s Revealer Concealer, launched in February, sold out of five shades within its first week on shelves.

There are also established brands like Ilia, which raised a Series B round that was revealed in January, and introduced new branding and packaging. The brand has been experiencing a period of “extreme growth,” according to founder Sasha Plavsic. It ended 2019 with $22 million in sales and for 2020, retail sales are projected to approach $35 million, sources said.

Bigger brands like Bite Beauty and Tarte Sea, which have been around for a while, were revamped ahead of Sephora’s clean makeup push. Sephora worked directly with the brands on “clearer DNA” and “clearer definition in clean,” said Alison Hahn, the retailer’s senior vice president of merchandising for color.

Clean at Sephora now encompasses 11 brands, including RMS Beauty, Aether, Tower28, Ilia, Kosas, Lilah B and Roen Beauty. “It’s a really beautiful, curated group of brands that are clean and can deliver to clients — now is the time we can speak proudly about it,” said Hahn.

“Brands have really evolved to beat conventional beauty,” added Jackson, who is adding Westman Atelier to her assortment and planning on eventually launching private label at Credo. “If you ask a customer now if you can tell the difference between clean [makeup] and conventional, they wouldn’t be able to tell you.”