The native of Smithtown on Long Island, opened her first boutique on her hometown turf today. The 1,132-square-foot... 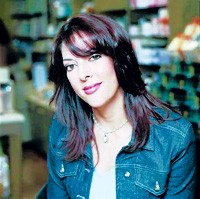 The native of Smithtown on Long Island, opened her first boutique on her hometown turf today. The 1,132-square-foot store is located in the bustling Roosevelt Field Mall in Garden City.

It brings the total number of Bare Escentuals boutiques to 24. Another shop will open before the end of 2004 in Schaumburg, Ill., at the prestigious Woodfield center. Earlier this year, Bare Escentuals opened in Manhattan where Blodgett got her start in the beauty business.

“I wanted to go to Manhattan to capture my life in the Eighties. With Long Island, I’m going back to the Seventies,” joked Blodgett.

Bare Escentuals products are sold in the boutiques, by mail order, on QVC, Sephora and Ulta. Select Nordstrom units will add the lineup in 2005. With the growth of stores and booming sales on QVC, Bare Escentuals’ annual sales have surpassed the $100 million mark, up more than 20 percent over the past two years.

The new store represents an updated look that Blodgett is rolling out, including multicolored graphics and a chandelier. There is a larger than usual makeup table with room for associates to sit with customers to discuss products and application techniques. Industry sources estimate the new location will generate $2.5 million in sales the first year.

Today’s soft opening will be followed after the holidays with a huge opening bash. “I want everyone I know to come to the store…my high school teachers and friends,” said Blodgett. The gala will be promoted via the company’s Web site which receives 60,000 hits a week, according to Blodgett.

Among the items she thinks will be early winners at the store are Camouflage eye colors, a Color By Number kit and a Goddess Collection that will be unveiled for holiday. Another hot item is a Birthday kit with an evening purse, lip gloss and glimmer in a hat box.

Blodgett believes the store will eventually earn a position within the top five Bare Escentuals boutiques. The top performer is currently the store at Mall of America.

Blodgett has become somewhat of a cult figure in beauty retailing, luring hundreds of women to her appearances on QVC where her line is among the top sellers. As her following grows, Blodgett hopes to add more points of distribution. “More distribution is important so our customers can see us in person,” said Blodgett.

New stores are selected by examining ZIP codes of consumers. That helped identify the need for the Long Island unit.

Consumers also flock to store appearances to get advice from Blodgett who, to this day, still personally answers letters and e-mails. Many products are named after loyal shoppers including a new collection with names such as Faith, Hope, Serene and Grace. “Those are real consumers’ names,” Blodgett said. She also does well with a mirror and coin purse called Change is Good, into which she personally inserts pennies from her collection.

Blodgett, in fact, receives so much fan mail that she recently published a book with photos and tips from devotees called, “What Hollywood Can Learn From Us.” The book will be sold on QVC and in stores for $14.95. Fans of the products are so intense that many join online chat rooms. In fact, 88 women just paid to go on a cruise with Blodgett for three days to share makeup tips. “We cruised to the Bahamas and talked to customers about what they want in products. We dressed up and had fun,” she said of what could be considered the ultimate in consumer research. On QVC, Blodgett is also planning a party with people from her book. “We’ll dress up and have a party and talk about products and sell some, of course,” she said.