NEW YORK — Retailers visiting the skin care edition of the Efficient Program Planning Session in Orlando, Fla., this week might have thought they had stumbled into a dermatological convention by mistake. 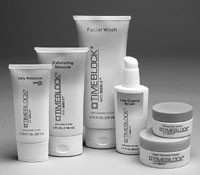 NEW YORK — Retailers visiting the skin care edition of the Efficient Program Planning Session in Orlando, Fla., this week might have thought they had stumbled into a dermatological convention by mistake.

That’s because mass market skin care has followed the path of the prestige market, with more and more launches supported by dermatologists’ claims. Celebrities are also cashing in on interest in skin care by promoting their favorite potions.

Consumers have an insatiable appetite for products promising the fountain of youth, fueled by media attention and growing distribution of sophisticated skin care. While many cite exposure to brands marketed by dermatologists, such as Nicholas Perricone, M.D., the real thrust at mass could be tied to reality TV.

“Shows like ‘Extreme Makeover’ and ‘The Swan’ have sparked people’s desire to improve their physical appearance, but not everyone is willing to undergo surgery or Botox shots to do it,” said Lenka Contreras, vice president of Kline & Co.’s Consumer Products Practice, referring to two reality TV shows.

Kline recently published a report on the U.S. skin care market that found the medical end of the industry has grown at a rate of 10 percent per year over the last five years, versus 4.5 percent for traditional skin care.

The facial antiaging segment of mass market skin care is soaring. According to Information Resources Inc, sales expanded more than 6 percent for the 52-week period ended May 16. However, it is important to note that this sector is still a small base of only $314 million — meaning there is much more potential.

Retailers are enthused about the crop of at-home microdermabrasion kits invading mass retail shelves. These include Vita-K from Woodbridge Laboratories and L’Oréal’s Refinish and Micro Pearl Abrasion from Starmaker Products. Dermabrasion was once a procedure reserved for the well-heeled. Now it’s the second most popular procedure: The American Society for Aesthetic Plastic Surgery reported that 775,000 women parted with at least $1,000 each for the process last year.

“L’Oréal’s microdermabrasion kit looks like it will be a winner,” said Marti Bentley, category manager of beauty at Duane Reade. She believes women are ready to try the process at home, equating it with at-home teeth whitening. Refinish retails for $24.99 and has the support of a consulting dermatologist, who calls Refinish the first at-home product that she recommends to patients. “There is a significant increase in the number of women looking for affordable at-home, antiaging alternatives to professional treatments,” said Dr. Lydia Evans, a dermatologist speaking on behalf of Refinish.

Micro Pearl Abrasion is already hitting big numbers at QVC and drugstore.com, and the company is now hoping to roll it out to more mass doors. The firm was among the 65 skin care companies at the EPPS show in Florida. “We have high hopes for it,” added Kristy Mattson, senior category manager for drugstore.com. Micro Pearl Abrasion is the creation of JoAnna Connell, a makeup artist, who used crushed pearls rather than chemicals in her treatments. The product carries a $40 suggested retail price tag. The line gets an added boost from a partner in the business, Anson Williams, who co-starred in the hit TV show “Happy Days.” Williams appears with creator Connell on QVC spots.

One of the first dermabrasion kits for mass was the

Vita-K Solutions At Home Microdermabrasion Kit from Woodbridge Laboratories. Company president Joe Millin said the kit is so similar to spa services that it even comes with a battery-operated applicator similar to those used by professionals.

Even Susan Lucci is in on the dermabrasion-at-home craze with Youthful Essence, a system she hawks on an infomercial as well as on HSN.

In addition to at-home dermabrasion, professionally endorsed lines are getting the nod from self-service mass stores. When BeautyBank’s Good Skin launches at Kohl’s in October, it will have dermatologist Doris Day behind it. CCA Industries’ new Denise Austin line not only has the endorsement of fitness guru Austin, but also the support of Dr. Stephen Hsu, a cell biologist at the Medical College of Georgia. The Denise Austin Skin Fit for Life brand by CCA will have eight formulas and will launch on shelf early next year. Prices range from $9.00 to $15.00. One retailer at the EPPS show singled out the line as the best at the show.

University Medical, which has the Face Firming Activation Kit, was also a part of EPPS. The firm has established a following in skin care thanks to early success with its Face Lift Kit. Dan Zarazan, vice president of sales and marketing at Naterra, said he received tremendous response to his firm’s Time Block. He added that the starter kit — which consists of a 2-oz. facial moisturizer, a 1-oz. daily moisturizer, a 1-oz. line control formula and an eye-firming cream — is a good place for retailers and consumers to test Time Block. The starter kit retails for $12.99.

Another fairly new skin care company to mass is eb5, which sells to J.C. Penney and select drugstores. It came to the show to extend into more mass doors. The firm also showed a new skin care line for younger users.

EPPS merged three categories together for the show: oral care, skin care and personal care. And despite the looming threat of tropical storms hitting Miami, the show was the largest in EPPS history. Interestingly, skin care, personal care and oral care are all categories in which products are being introduced that replace what was once done at a professional office, such as teeth-whitening at a dentist’s.

The fact that these three categories were marketed together also raises some of the merchandising challenges retailers face as new categories emerge. With more professional products on the market, merchants must create special sections within the store worthy of the products. That is one reason why chains such as CVS and Brooks have carved out skin care boutiques.

“Consumer awareness of these items is high, thanks to launches in prestige stores. Consumers are shrewd and know they can find them at mass,” said industry consultant Allan Mottus. “Now it is up to the chains to present them appropriately, and that might mean adding service.”