Critical Mass: Styli-Style Goes After Nothing but the Best

NEW YORK — Grant Berry, creator of Styli-Style, invented so many long-wearing makeup products he had to find a way for women to take them off.

While working on Styli-Style, which has become synonymous with durable formulations, Berry often... 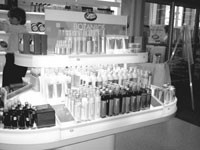 NEW YORK — Grant Berry, creator of Styli-Style, invented so many long-wearing makeup products he had to find a way for women to take them off.

While working on Styli-Style, which has become synonymous with durable formulations, Berry often sampled items on his arms. He discovered a water-based remover that not only cleaned the products from his arm, but left his skin soft. That research has resulted in Simply the Best Remover.

Simply the Best is Berry’s first foray beyond lip and eye color and also a baby step into skin care since the formula cleanses while nourishing skin with jojoba oil.

The item is shipping into retail accounts and is selling for $10. The makeup remover category is one of the few sectors of the mass market beauty business that’s showing healthy sales gains. Sales for the 52-week period ended Jan. 26, 2005 jumped almost 20 percent to $25 million, according to Information Resources Inc. data (excluding Wal-Mart). Sales are dominated by a handful of brands opening up opportunities for new entries.

With Simply the Best as a platform, Berry hopes to unleash skin care items over the next year. “We won’t get into it without innovation,” he added. “We don’t just expand for the sake of expanding.”

In the meantime, he’s still at work on long-wearing formulas, unique packaging and captivating fixtures. Berry has carved out a place in the crowded beauty market by launching products such as the Flat Pencil and the Kajah Bullit. The latest is L3 Timeless Lipstick, a nondrying, long-lasting lipstick created to last eight hours. L3 is packaged in a new silver case with a color-matched, silk-screened cap for shade identification. “Too many women ruin lipsticks by opening them up in the store. This helps a woman find the right color,” said Berry. L3 has a suggested retail of $7.

Realizing that many women are gravitating to lip gloss, Styli-Style added four types of gloss to its portfolio under the Plastique Lipgloss banner. All of the formulas in the lineup contain lip-plumping agents to puff up lips within 30 days of use. Lip plumpers were one of the hottest categories emerging at the recent National Association of Chain Drug Stores’ annual meeting, according to retailers.

One of the four entries is Magical Lipgloss, which features an ultraviolet color that produces an iridescent glow suitable to be worn alone or over color. Another option is the Glitter Lipgloss, which creates a soft, glimmering effect for lips. The Illuminate gloss contains a special light-reflective pearl to create glow on lips. The fourth item is the Hi-Shine Lipgloss that produces a glossy shine without a sticky feeling. All of the glosses retail for $6 with the exception of the $8 price tag on the Magical Lipgloss, which retails for $8.

In addition to product and packaging innovation, retailers have singled out Styli-Style for its fixtures. The latest borrows from plasma flat-screen television technology. New displays feature a high-resolution graphic on a large flat screen. The image is in the front of the display, versus at the rear as is typical with off-shelf displays. CVS, Walgreens, Rite Aid and Brooks-Eckerd are among the chains that will feature the flat-screen display. The flat screen joins the unique color wheel Berry devised to showcase the variety of colors in his pencil line.

During last week’s NACDS gathering in Palm Beach, Fla., Tom Ryan, chairman, president and chief executive officer of CVS Corp., applauded lines such as Boots that help differentiate one retailer from another.

Based on its success in CVS and Target, Boots has announced expansion of its “British Aisle” in more U.S. markets. Martin Waters, Boots ceo for North America and Asia, said 150 new Boots shop-within-shops will bow in select Target and CVS stores. “Our test marketing in 2004 proved to be very encouraging. Our global research tells us that women all over the world love Boots products for their outstanding quality and value for the money,” he said.

The products, initially tested in Connecticut and Denver, will now be featured in stores in New York, San Francisco, Dallas, Minneapolis and the greater Washington, D.C., area. The lines sold include No 7, Botanics, Detox and the Eastern, Sanctuary and Time Dimension collections. Boots intrigues CVS, according to an executive, because items sell well no matter the demographics of the stores.