The CROWN Act Is Pushing to Protect, and Value, Black Women’s Hair

“Hair discrimination is a really critical issue in how racism gets manifested.”

It was a corporate training on women’s conformity in the workplace that made Esi Eggleston Bracey realize the straightened bob she was sporting was its own kind of conformity — one that saw her shrinking to fit into longstanding norms of “professionalism” that didn’t accommodate her natural hair.

But that, she said, “is not OK.” “Hair discrimination is a really critical issue in how racism gets manifested.”

And that’s why the executive vice president and COO of personal care at Unilever North America — apart from committing to wearing her hair in its natural state throughout her 30-year corporate career — has a personal commitment to ending race-based hair discrimination by pushing legal protection through the CROWN Act, which is bolstered by the CROWN Coalition in fighting for the cause.

The CROWN — Creating a Respectful and Open World for Natural Hair — Act, created in 2019 by Unilever brand Dove and the CROWN Coalition, is a law that ensures protection from discrimination because of race-based hairstyles. It means no one can be sent home from work for wearing braids, dreadlocks, twists, knots or any protective style, a reality Black women are 1.5 times more likely to face because of their hair, according to a Dove CROWN research study done in 2019. It means the 80 percent of Black women who say they have to change their hair from its natural state to “fit in at the office” won’t have to. It also means no one can be denied educational opportunities because their hair doesn’t meet a non-inclusive school dress code.

“Dove has a life passion as a brand and it really is championing and campaigning for real beauty for women and girls, and that means truly beauty inclusivity, how we can be confident and comfortable in who we are,” Eggleston Bracey told Beauty Inc. “When we look around, that just is not the case. And if you really go deeply into Black women, it’s our hair.” 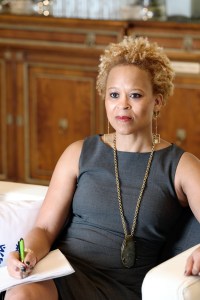 Black women have worn protective hairstyles, like braids and twists, for centuries, endeavoring to keep their coiled crowns from damage and breakage. It’s a look inaugural poet Amanda Gorman recently immortalized with a red padded headband set atop her braids like a crown of its own. And though these styles have been passed down by ancestors and lines that would have long valued their beauty, many Black women have forced their hair, often against its will, into looks more “acceptable” to the Western world.

“When we talked to women, we heard over and over again some horrible, painful stories about lack of acceptance of hair, things our hair were called, torturing our hair to make it acceptable,” Eggleston Bracey said. “We’ve been at a journey of our hair, that we can love our hair, celebrate our hair.”

In her own journey of growing out a relaxer and embracing the big chop to let her natural hair grow in, Eggleston Bracey said, “It was like freedom.”

“I didn’t want to conform. I didn’t want to believe that I was just like everybody else. And as an advocate, activist, champion for diversity…I couldn’t be the poster child for physical conformity,” she said. “I did it to show who I am but what I got was incredible freedom.” 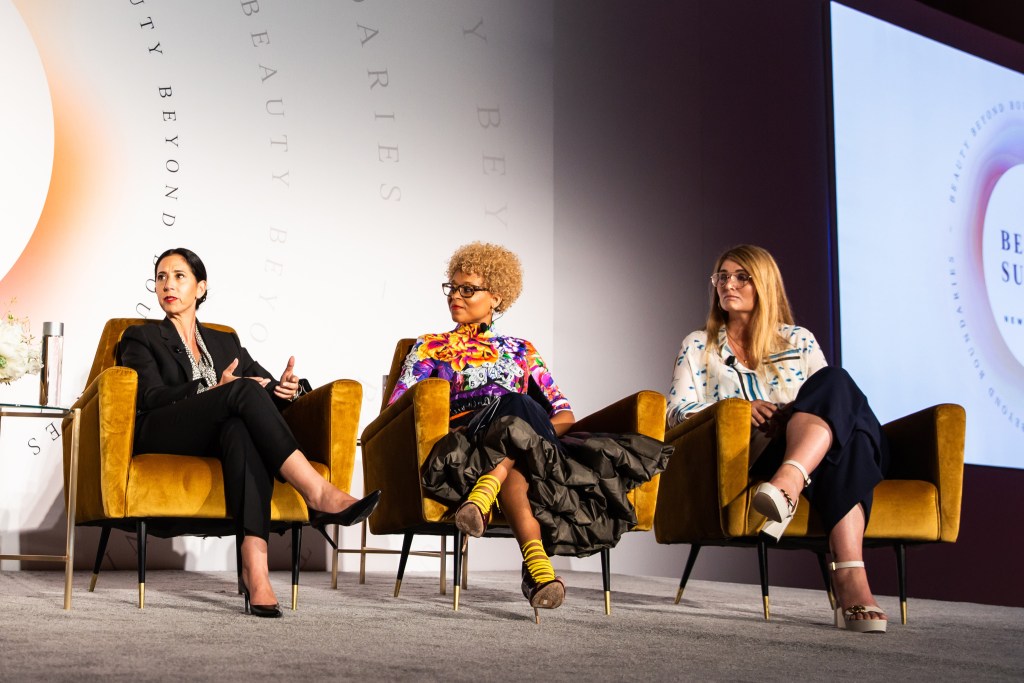 It’s a freedom she wants everyone — anyone — to enjoy.

So far, the CROWN Act has been passed and accepted as law in seven states — California, New York, Washington, Colorado, New Jersey, Maryland and Virginia. California Sen. Holly J. Mitchell (D) was the first to introduce and name the CROWN Act (SB188) in 2019. In late January, the Act passed Delaware’s House and is now en route to the state’s Senate. Taking things to the federal level, the Act passed the U.S. House of Representatives last year, though it will have to be reintroduced this year and be cleared through the Senate.

“We’re really hopeful and optimistic about passing in the House and the Senate,” Eggleston Bracey said. “With that, though, we’re still committed to going state by state, because you maximize protection when you have both federal legislation and state legislation. You have from the smallest of businesses, just one or two employees, to the largest of businesses and the best chance of those being covered if you have both state and federal legislation.”

The CROWN Coalition, which counts the National Urban League, Color of Change and the Western Center on Law and Poverty, alongside Dove as its members, has been on a mission to support legislative officials in their efforts to see greater adoption of the CROWN Act. And an ongoing petition designed to urge legislators to vote “yes” on the Act, has made it a “movement of the people,” according to Eggleston Bracey. So far, the petition has amassed 247,731 signatures out of the 300,000 it’s seeking.

“We’re on the ground and committed. Dove is committed for the CROWN Coalition to just make sure everyone has the right to wear their hair their way without fear and trepidation of having their employment taken away or being sent home from school,” she said. “We inspired a spark with Dove on an issue that has been there and gave the call to action to help and mobilize, but it is a power of the people. We’ve got grassroots organizations, we’ve got legislative officials. Every legislator that’s been part of the Act has been a person of color, and a Black person and, disproportionately, Black women.”

While some brands have lobbied for change, Unilever, via Dove and the CROWN Act, has manifested it at a legislative level — which may prove a key differentiator in effecting transformational change.

“Instead of just highlighting what was wrong, we wanted to make it right,” Eggleston Bracey said. With the pandemic seeing legislative states closed, 2020 proved some setback for the Act’s legislative agenda, but momentum has recovered. “It continues to give us an engaged platform to talk about it.”

“There’s the issue of inequity in health care. Being in the beauty and personal care business, that manifests itself as an inequity in skin care. Fifty percent of derms say they don’t get an education or understanding of how to care for skin of color, and today 40 percent of America is people of color,” she said. That’s one reason Unilever is “championing for skin equity and health care.”

As a result of that commitment, Unilever said over the summer that it would make its skin care portfolio more inclusive, starting with eliminating words like “fair/fairness” “white/whitening,” and “light/lightening” from its packaging. The company changed the name of its Fair & Lovely brand sold across Asia, which had long been associated, with skin lightening, to Glow & Lovely. While the shift caught social media backlash for being cosmetic only, Unilever maintains that “Fair & Lovely has never been, and is not, a skin bleaching product,” that it, instead, works to “improve skin firmness and smoothen skin texture — all of which help enhance radiance and glow.”

The company also launched Melē in September, with the aim of offering “science-led skin care, designed to nourish the magic of melanin-rich skin,” according to the brand’s website.

On the men’s side of the business, Dove Men+Care also announced in September a partnership with the National Basketball Players Association called Commit To C.A.R.E. (Care About Racial Equity) Now to protect Black men.

“Our mission is to change the way the world sees and treats Black men and put an end to harmful stereotypes of Black men,” Eggleston Bracey said. “We’re advocating for the George Floyd Justice in Policing Act that helps eliminate bias in the police and gets rid of harmful chokeholds and a number of other things, so that directly comes out of that, along with showing Black men in all their humanity, the players as husbands and community leaders and not just a super power athlete or as criminals.”

She added, “There’s a lot of action that through our purpose at Unilever, we’re committed to taking.”

While George Floyd’s killing last year didn’t quite directly impact the CROWN Act’s momentum, it did resurface centuries-old systems of oppression and get more people on board with pushing for progress.

“What I think it did was that it made everyone more woke and it made much more people a captive audience to change,” Eggleston Bracey said. “Because of George Floyd’s sacrifice we saw that we could do more on Dove…As we thought about CROWN, creating a respectful, open world for natural hair, we could also stand for no racism, creating a respectful, open world with no racism.”

With that, the Crown Coalition, endeavoring to expand its purview and its impact, developed the CROWN Fund, with which the group has committed to donating $5 million over the next five years for the ongoing support of the Black community. It will also facilitate investments in organizations like the National Black Child Development Institute and mentoring program Save a Girl, Save a World, among others, to support their work for the community.

Beyond that, Eggleston Bracey added, “We’re evolving…the Dove Self-Esteem Project and we’ve really supercharged it to explicitly address racial justice and inequities in appearance bias…In this we’re increasing representation of Black voices on our platforms and just continuing to work overall, even at Unilever, at more inclusivity and more diversity in our workplace.”

As it stands, Unilever says 17 percent of its leadership is Black, and among its overall employees, that number is 8 percent.

To bridge the divide between where the world is at present when it comes to racial equity and where it needs to be, according to Eggleston Bracey, it’s going to take greater societal and economic inclusion, for one, as well as ending harmful stereotypes — which the beauty industry can play a particularly critical role in.

“In beauty, we shape those images so we can be responsible for the images,” she said. “And these are issues I think we should address, ending harmful stereotypes.”

Increasingly, brands and businesses are being called on to be driven by a purpose that extends beyond profit.

“If you look at the Edelman Trust [Barometer], it shows that more and more people are looking to business to take action because of trust. They have greater trust in business,” Eggleston Bracey said. Purpose, she added, was the reason she joined Unilever three years back. “Each and every brand has a purpose and, out of that purpose, we take action to be people and community positive and we think we’re leading the way for all of business to make that impact because we are rewarded with consumers buying our products. We help them through our products, but I believe we have an obligation to help them with more because we can. And it’s through their investment in us and their dollars that we profit, so we should have their communities profit.”