In the early Eighties, curly hair expert Ouidad and her husband, Peter Wise, a former restaurateur, flipped a coin to decide if the entrepreneurial duo would open a salon or a restaurant. 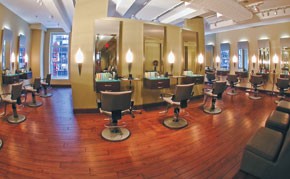 In the early Eighties, curly hair expert Ouidad and her husband, Peter Wise, a former restaurateur, flipped a coin to decide if the entrepreneurial duo would open a salon or a restaurant.

The coin landed on heads, and the salon concept won.

One year after the San Francisco-based private equity firm JH Partners (of Bare Escentuals fame) purchased a majority stake in the company, Ouidad is plotting the firm’s next phase of growth, which could eventually include specialty shops and TV.

Plans for this year center on expanding the network of certified Ouidad salons to about 50 from the current 10, and introducing a yet-to-be-named leave-in conditioner product and opening a West Coast flagship salon in Santa Monica, Calif., this September. The boutique salon will house four to five stations.

Industry sources said the business, which they estimate generates more than $10 million in revenue, will experience a double-digit growth rate this year.

Listen to Ouidad talk about embracing hair’s natural curl and her passion for her profession and one cannot help but think of Bare Escentuals Inc.’s chief executive officer Leslie Blodgett, who also serves as the brand’s pitchwoman.

Michael John, a senior partner at JH Partners, acknowledged that the parallels between Ouidad and Bare Escentuals, which went public in 2006, are no coincidence.

“When we looked at Ouidad, we saw a wonderful candidate to execute a similar business model as Bare Escentuals,” said John. “Seven years ago, the common thinking was that multiple channels would cannibalize sales. What we learned with Bare Escentuals was that they actually compound each other.”

The mineral makeup firm also disproved the notion that TV retailing wasn’t fit for prestige brands. That said, Ouidad plans to expand sales beyond its Manhattan flagship, the Internet and its 10 or so salon affiliates, to specialty retailers like Sephora and Ulta and TV shopping networks and infomercials. Referring to the latter two, John said, “both will be vital, but right now, we are really focused on the brand messaging.”

In July, JH Partners named Hillary Solomon as Ouidad’s president and ceo. Prior to Ouidad, she held marketing posts at the L’Oréal-owned Kiehl’s brand, Frédéric Fekkai and Revlon. Solomon, a curl convert, said she immersed herself in the salon to learn about the world of Ouidad. “Ouidad is solving a problem,” Solomon said. “This is the first time that I’m working with products that make a difference.”

This story first appeared in the April 11, 2008 issue of WWD. Subscribe Today.

Earlier this month, Patrick Campbell joined Ouidad as marketing director. He joined the company from Unilever where he served as senior brand development manager for Dove.

Ouidad has amassed a following of curly- and wavy-haired devotees by pioneering her “Carving and Slicing” cutting technique, which requires the stylist to study a client’s curl pattern and then cut with the curvature of the curl — carving tight curls and slicing loose ones. To date, Ouidad has trained and certified nearly 200 stylists on the trademarked technique. Ouidad said of the technique, “It’s couture hair design.” Ouidad takes clients three days a week and has a waiting list of three months for an appointment.