Cutler, owner of the eponymous East Side salon, will formally open a second outpost in SoHo in... 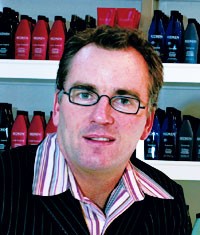 Beiersdorf Returns to Pre-pandemic Sales Level in First Half

Cutler, owner of the eponymous East Side salon, will formally open a second outpost in SoHo in mid-March. The space had a soft opening last week.

While the West Broadway and East 57th Street salons are similar in size — each are about 3,200 square feet, and each was developed in cooperation with Manhattan design firm Messana O’Rorke — the SoHo space has several key differences.

Uptown, color and haircutting areas are at opposite ends of the salon and are separated by a staircase; in SoHo, the two services share 28 stations on one main floor. Each of the stations — which span both sides of a spring green, glass and chrome table unit — features a mini flat-screen TV, which broadcasts fashion, beauty and travel information. The units — powered with touch-screen features developed by I-Vu, a British technology firm — also allow customers to easily get more detailed information on what they see. Two large flat-screen TVs broadcasting similar content are mounted in each of the salon’s large picture windows facing West Broadway, and Cutler also is developing content for the TVs, highlighting his team’s fashion show and editorial involvement.

Cutler’s new salon also introduces a hair color concept developed by L’Oréal division Redken New York. Intended to bring what is traditionally a backroom process front and center — and educate consumers in the process — the Redken Lab is a freestanding, custom-built unit that features an interactive consultation center, hair color swatches spanning the shade spectrum, and Redken color-maintaining products. “It brings the whole process out in the open, and eliminates the lack of communication that you often see in the [hair] color business,” said Cutler. “It’s a great tool to make people comfortable with the idea of coloring their hair.” Redken could roll out as many as 20 of the units across the U.S. this year. The concept is more advanced than the Redken Lab that made its debut in the Seventeen Studio Spa Salon in October and follows in the footsteps of the L’Oréal Professionnel Color Bar, which first appeared in Fred Segal Beauty’s Santa Monica, Calif., store in 2003, and then in Manhattan’s Butterfly Studio last year.

The SoHo space joins Frédéric Fekkai in breaking an unwritten rule in the salon biz — it’s open on Sundays, and Cutler hopes to keep the space humming seven days a week in the not-too-distant future. And although Cutler is the sole owner of both salons, he’s also broken another unwritten rule in the biz — by giving equity stakes in the new space to two senior employees, Ben Stewart and David Kastin, both of whom helped build business in the uptown salon. “They were both instrumental in building Cutler into what it is today,” said Cutler of the decision. “You have to reward good people to keep them happy.”

Speaking of staff, several key Cutler employees — including Cutler himself, who still is active on the cutting floor — will split their time between the locations. Cutler also has hired another 35 employees to staff the downtown location — including several bookers, who share a downstairs command center. As well, the salon’s 30-member editorial team also will split their time between the salons when they aren’t doing shoots. The salon’s retail area features Redken products and Cutler’s recently developed hair care collection.

All told, industry sources estimated the new space could generate upward of $1.25 million in its first year.

Within the next few years, Cutler would like to open outposts in other cities — especially Los Angeles and Sydney (Cutler is a native Aussie). But he has no intention of becoming the McDonald’s of the salon industry. “I think the concept can expand to other cities — staying true to the original space, but tweaking the mix to make it perfect for the area,” said Cutler. But he’s not out to have one on every corner. “I want to keep the prestige — not to mention my own touch on things,” he said.

Cutler SoHo will be feted in two formal launch parties. One will be thrown by Redken on March 21 for the New York press, and the second will be the subject of a cable TV show. “Party Planner,” a Discovery Channel program, is devoting an hourlong episode to throwing a hip celebration for New York cognoscenti — socialites, celebrities and such. It is slated to be filmed on March 14, although a definite airdate has not yet been set.