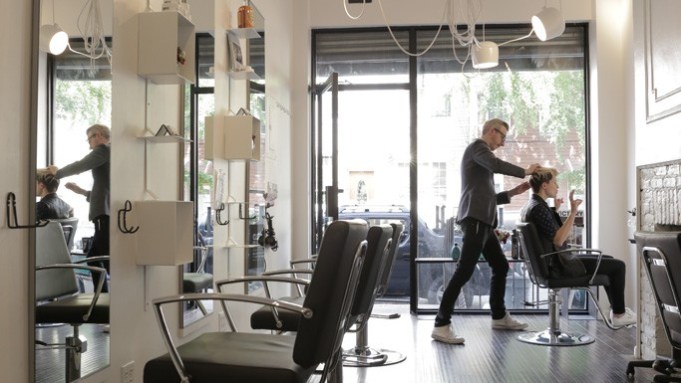 To achieve it, brands tap the power of editorialized Instagram and Twitter feeds and bloglike sites. But hairstylist and salon owner Rodney Cutler is taking the pursuit a step further — to Williamsburg, Brooklyn.

His newest five-chair salon, open now, is located in a space shared with cool-kid hangout St. Balmain, a restaurant-café on the neighborhood’s north side. “I spent quite a few Mondays at the St. Balmain backyard having lunch and was fascinated by the number of stylish men and women who had their business meetings in the courtyard or stayed there working for hours. It felt like their second home,” said Cutler. “When I looked at this community throughout the day, a salon made sense. Williamsburg lends itself to a space that’s a shared experience.”

The 225-square-foot salon features a full bar where customers can have food and drinks and share a backyard patio with St. Balmain. Decor is understated, said Cutler general manager Derek Reynolds. “We stripped down old dry wall and revealed a great fireplace,” he said. “We’re looking to maximize architectural details instead of spending tremendous amounts of money and overwhelming the space with a lot of stuff.”

Reynolds hopes Apple Store-like digital check-ins and an application for booking appointments will appeal to the area’s tech-savvy residents. The salon does not have a front desk, but a host is on hand to assist clients on busier days. “We want to encourage them to soak up the neighborhood feel,” said Reynolds. Prices are the same as Manhattan Cutler locations: Haircuts and color start at $90, styling at $65 and highlights at $160. The project cost Cutler, Reynolds and two other investors more than $33,000 to get up and running over a span of six weeks. “We could have gone around the corner and opened a space with 15 chairs, but this felt right,” said Cutler.

Cutler’s move to Williamsburg is not a rush to jump on the Brooklyn bandwagon. “I’ve never been the type to say, ‘Oh, we have to open a salon in L.A. and Miami or this and that city,’” said Cutler. “We are looking for the right opportunities at the right time.” Williamsburg felt right because of its “communal” feeling, he said, and the relationship with St. Balmain grew organically — one of his head stylists, Tyson Kennedy, is friends with the restaurant’s owners.

“We attribute some of that success to our education,” said Reynolds. “We have talented stylists who can work in any market.” The company also has its sights on opening locations in London and Melbourne, Cutler’s hometown. “London doesn’t need another hair salon and neither does Melbourne, but [we can differentiate by] communicating our voice, not just through the hair, but through the space as well,” said Cutler. He will likely reach decisions on both projects by the end of the fourth quarter. A blow-dry bar in one of his New York locations may also be in the works. “I’ve always felt that evolution is critical for our creative and business goals,” said Cutler. “My team needs to feel like they’re part of something that’s constantly moving.”