NEW YORK — CVS' affinity for Finland continues to grow, as the chain drugstore devotes more space and attention to its exclusive Finnish beauty brand, Lumene. One year after CVS rolled out Lumene to all its 5,400 stores, the retailer announced... 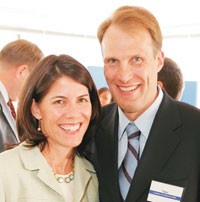 NEW YORK — CVS’ affinity for Finland continues to grow, as the chain drugstore devotes more space and attention to its exclusive Finnish beauty brand, Lumene. One year after CVS rolled out Lumene to all its 5,400 stores, the retailer announced plans to bring more products stateside, including a men’s grooming collection.

“Lumene is far exceeding our expectations,” Helena Foulkes, senior vice president of marketing and advertising for CVS, reported at a reception Wednesday evening hosted by the consul general of Finland Osmo Lipponen at his Fifth Avenue residence. The retailer is in the process of moving its Lumene assortment from an endcap to an 8-foot wall display, which will stock both cosmetics and skin care. CVS already has outfitted the newly converted Eckerd stores in Florida with the permanent display fixture. Men’s grooming, slated to arrive in October, will be merchandised in the men’s care area, said Janice Jacobs, director of proprietary brand development for CVS.

“The bridge from Finland to the U.S. is a very long one,” commented Lumene president and chief executive officer Tapio Pajuharju, adding, CVS has introduced the Finnish brand to nearly every American city. Lumene is sold in 32 countries worldwide.

Executives from both companies used the occasion to toast to the 35th anniversary of the Lumene brand and to introduce its newly signed makeup artist, Kyriaki.

The Grecian-born Kyriaki began her career in Paris and spent 12 years working the fashion circuit — creating runway looks at fashion shows in New York, Paris and Milan. Some of her editorial credits include Vogue, W and Glamour. She now resides in New York City and will work to introduce beauty editors to Lumene.

While she’s still familiarizing herself with the assortment, Kyriaki divulged that her favorite products include Hydra Drops Makeup, a sheer coverage foundation that smooths and evens skin tone; Light Reflect Highlighter housed in a click-top pen, and Beauty Base, a primer that, when used under foundation, is designed to help makeup stay put, and when used alone, leaves a matte finish.

Lumene formulates its skin care products with active ingredients indigenous to Scandinavia such as cloudberries, arctic peat and spring water. This fall, CVS will introduce Lumene’s newest skin care collection, called Vita-Nectar, which features blackcurrant seed oil. Each product in the line — a day, night and eye cream — is said to accelerate cellular renewal and restore skin firmness. The line bowed in Europe in April, said Tiina Isohanni, Lumene’s vice president of research and development. Vita-Nectar products will retail for $14.99 each.

Lumene has translated that same skin care technology into color cosmetics to create BerryFun Lip Gloss for $8.99. The gloss, available in 15 shades, has a subtle blackcurrant scent and is designed to soften and smooth lips.

Paivi Korteniemi, Lumene’s product manager for color cosmetics, acknowledged that the company has had to broaden its shade range — particularly for its foundations — to suit the diverse complexions of American women. She added the beauty company works with CVS to modify shades and products, if need be, before launching them in the U.S.

Lumene is just one of several major beauty initiatives for CVS, as the chain seeks to separate itself from competitors. To date, the company has rolled out more than 110 Healthy Skincare Centers and continues to test products from Boots, the U.K.’s leading beauty retailer. Foulkes noted that the drugstore chain will continue to aggressively pursue exclusive brands. She added that, given that 80 percent of CVS customers are women, the retailer “works constantly to be a beauty destination.”