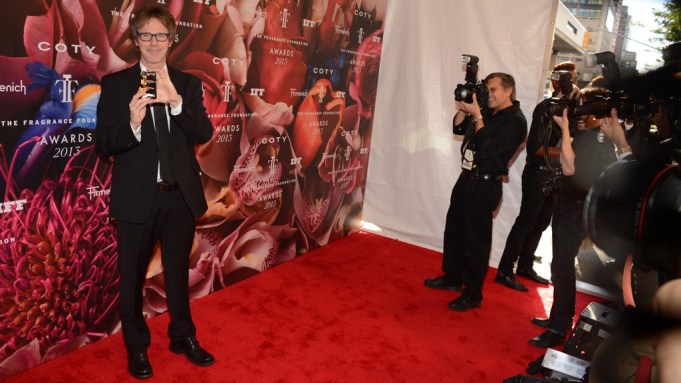 Host Dana Carvey had a little useful advice for the ladies in the audience at the Fragrance Foundation Awards Wednesday evening. “I think if women are honest, they like a strong man,” he said to the packed house at Lincoln Center’s Alice Tully Hall. “They like the broad shoulders and the washboard abs. They like strength. They also want a man who can talk to them and understand them. But ladies, you can’t have that guy. Because he has a boyfriend.”

The audience’s hysterical laughter in response set the tone for a lively evening, and although Carvey originally dryly noted that the ceremony would take “17 hours,” it easily clocked in at a little over an hour.

While past ceremonies have included such gaffes as 2011’s exploding transformer, this year’s show went off without a major hitch, thanks to the new president of the Fragrance Foundation, Elizabeth Musmanno. Musmanno also eliminated the long-running nickname for the awards, FiFi’s. The prizes are now dubbed the Fragrance Foundation Awards. Musmanno chopped less-populated award categories such as direct selling; added a perfumer lifetime achievement award, which was given to Firmenich’s Alberto Morillas; inducted the first magazine editor in chief, Allure’s Linda Wells, into the Fragrance Hall of Fame, and added a tailor-made poem by Richard Blanco, who also created a poem for President Obama’s second presidential inauguration.

“Last year, I stood before you and I committed to continuing the evolution we had started at the Fragrance Foundation,” said Jill Belasco, chairman of the Fragrance Foundation. “I especially thank Elizabeth for her leadership, which has brought an exciting new energy to the Foundation — I think you can feel that. In just a few short months, Elizabeth has created a visible change in spirit and direction, and I’m so very grateful for her partnership.” Belasco also thanked the Foundation’s board for its hard work, noting, “We have a lot of work ahead of us, but we’re going to get there.”

Taylor Swift, who nabbed the Fragrance Celebrity of the Year award, disappeared soon after her award was presented by E. Scott Beattie, president, chairman and chief executive officer of Elizabeth Arden Inc., but not before she got in a plug for Taylor by Taylor Swift, the fragrance she will launch later this summer, showing both a behind-the-scenes reel and the finished print ad for the fragrance. “My first fragrance, Wonderstruck, was all about a daydream, a fantasy, this romantic ideal we all have….I love telling stories. I love starting at the beginning and adding pages as you go. And this is a really nice page to add to that story,” she said.

“Over the past two years, Taylor’s fragrances have sold more than $150 million around the world,” said Beattie. “We cannot thank Taylor enough for her passion, her perfectionism and the way she has energized our entire distribution.”

But it was Carvey’s wit that propelled the ceremony. In addition to reprising many of his famous “Saturday Night Live” sketches and even his “Wayne’s World” character, Garth, Carvey created a collage of fictional fragrance ads, such as Ravenous by Chris Christie, Breathalyzer by Reese Witherspoon, Pump by Hans and Franz and, of course, Satan’s Scent by the Church Lady. He also affected a French accent for much of the dialogue, mimicking the Gallic-inflected voice-over of the program.

Justin Bieber didn’t show, but he proved the power of social media when he garnered the Consumer Choice Women’s award. Bieber sent just one tweet to his 40 million plus Twitter followers, inviting them to cast a vote on Fragrance.org for his scent, which beat out heavy hitters such as Chanel’s Coco Noir, Dot Marc Jacobs and Gucci Premiere to nab the award.

Former Balenciaga designer Nicolas Ghesquière gave a shout-out via Catherine Walsh, senior vice president of corporate communications at Coty Inc., which holds the fashion house’s scent license. “‘I am truly proud of Florabotanica — it was a fantastic creative freedom to design it, and I had the great pleasure of sharing this unique project with the great people at Coty,’” Walsh read.

Patrick Firmenich, chief executive officer of Firmenich, was on hand to present Morillas — who joined the company in 1970 — with his award. “We are very grateful that you, the fragrance industry, have decided to honor an extraordinary man,” he said, adding that the master perfumer is “driven by his emotions and his instinct to create.”

Retail Innovation of the Year: QVC

Media Campaign of the Year Men’s: Dolce & Gabbana The One for Men Sport by P&G Prestige Products