The owner of one of the newest salons in Chelsea - and there have been at least half a dozen in the past year - said his will have staying power, citing loyal clients, a high regard for service and the salon's Upper East Side-meets-Chelsea atmosphere... 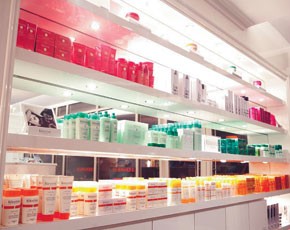 The owner of one of the newest salons in Chelsea — and there have been at least half a dozen in the past year — said his will have staying power, citing loyal clients, a high regard for service and the salon’s Upper East Side-meets-Chelsea atmosphere as a formula for success.

Adrian De Berardinis is no stranger to Manhattan’s salon mecca. His hairstyling career began five years ago at Chelsea’s thriving Antonio Prieto salon, where he rose to creative director and was responsible for heading up the salon’s education program, as well as management responsibilities.

But working for someone else was not a long-term plan, De Berardinis said. His father, mother, uncle and aunt have all been in the salon business, and his family has owned salon chains in Toronto — where he was raised — and Italy and Hong Kong during the Seventies, Eighties and Nineties. His father, Giancarlo, currently owns De Berardinis Salon in Greenwich, Conn.

Last New Year’s Eve while on a family vacation in Miami, the two had a heart-to-heart on the ups and downs of the salon world. “This is not an easy business, it can be very difficult,” said Giancarlo to his son at the time. But the duo decided to invest in their ultimate dream.

Open for less than a month is De Berardinis Salon, located on 155 West 21st Street, between Sixth and Seventh Avenues, nestled between a barbershop and yes, another salon.

The 2,200-square-foot space sells and uses Kerastase products, as well as styling products by Shu Uemura. Designed by New York socialite and designer Celerie Kemble of Kemble Interiors, the salon aims to be stylish yet approachable, with large antique mirrors and brushed gold light fixtures, complete with a retail area, reception and lounge area and coffee bar. A center island on the main cutting room floor is dedicated to color (Wella and Redken brands are used), with 16 chairs in total filling up the salon. Currently, De Berardinis employs four colorists and six stylists, and the importation of well-known hairstylist Cristian from Milan is pending for January. A manicure station is also in the works. Haircuts start at $100 and reach $175 for new clients of De Berardinis. Single process color starts at $95; highlights start at $145. Blowouts are $40.

De Berardinis owns 51 percent of the salon and holds the title president; his father owns a 49 percent stake and serves as its secretary. The salon cost upward of $700,000 to build. The two expect to generate about $2 million in first-year sales beginning Jan. 1.

Entering the salon world seems a natural place for someone who has a family steeped in the profession, but De Berardinis did try his hand at several other careers before discovering hair was his thing.

“He liked music, he made a couple of demos,” said his father. “He was always very creative, he tried advertising. From a very early age he saw details,” he added.

De Berardinis, who recently styled the hair of Isabella Rossellini and Monique Lhuiller, and worked on a shoot for Uomo Collezioni, said he is halfway to success.

“It’s sort of mission accomplished for me,” he said of completing construction of the salon. Of the rampant competition in the area, De Berardinis said there’s only thing he’ll have to do. “We have to raise the bar higher for service. We have to be better than the next guy.”