"We already see a lift in lip…our objective is to do the same thing with foundation."

Estée Lauder is ramping up shade-matching technology in stores.

“It’s not about just technology for the sake of technology. What we are developing for the Estée Lauder brand is technology to enhance the consumer experience,” de La Faverie said. “Today, we are leveraging tools to really make sure we can engage with the consumer in an even more meaningful way around the world.”

The iMatch technology is rolling out in the U.S., the U.K. and Japan now, and is expected to be in more than 30 countries in the next six months, according to de La Faverie.

The iMatch rollout follows Estée Lauder and YouCam’s development of a virtual try-on tool for lipstick, where customers can try on 30 shades in 30 seconds. 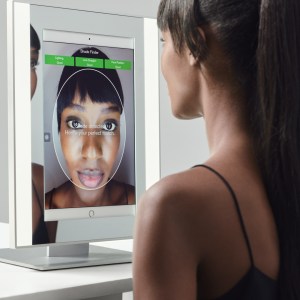 “We have over 8,000 devices around the world now allowing the virtual try-on for lipstick and what we’ve seen is the increased use of the tool over time as consumers get more and more comfortable,” de La Faverie said. Online, customers who use the tool have a 2.5-times higher conversion rate, according to the company.

For Estée Lauder, iMatch comes at a time of brand success. After a period of struggling, the team has turned the business around through focusing on hero franchises like Double Wear and Advanced Night Repair. Technology has played a role in that success, too, de La Faverie said.

By rolling out iMatch, he expects to see higher engagement, but also higher sales, he noted. “We already see a lift in lip…our objective is to do the same thing with foundation,” he said. Double Wear, the brand’s best-selling foundation, is up first, but the technology will be applied to other foundation ranges in the future.

YouCam’s technology has color-calibrated LED lighting to mimic natural sunlight in order to get the most accurate match. The app also provides consumers with information on lighter, darker, warmer and cooler shades, so they can choose a foundation based on color preference or season.