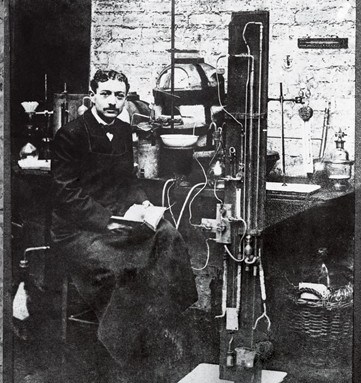 Few women wash their hair around the clock or spend hours on end in tanning booths. But simulating such conditions in the name of better dyes is part of the research and development picture at L’Oréal, a sprawling department spanning such diverse scientific disciplines as biology, chemistry and medicine and devoted to breakthroughs at the molecular level.

“There are often more than 50 different disciplines involved in one product,” says Jean-François Grollier, who has headed the company’s R&D activity for two decades, ticking off toxology, biology, optometry and microbiology — to name but a few. “During the elaboration of a product, each participates at a given moment.”

Yet that was not always the case. Grollier was instrumental in expanding the R&D division’s expertise beyond the field of chemistry by injecting biology and life sciences into the mix.

Sitting in his office on the top floor of L’Oréal’s headquarters in Clichy, a Paris suburb, Grollier’s enthusiasm is palpable as he recounts his 40 years at the company he entered fresh out of school. An imposing figure, Grollier stands well over 6 feet (giving a good vantage point to check out dyed hair, he says) and has an insatiable curiosity for a panoply of subjects.

He says key to his lifework is the necessity “to listen, to watch, to anticipate.

“Things are not spontaneous,” Grollier adds. His reminiscences slalom between the internationalization of L’Oréal’s laboratories and evaluation centers, safety issues and patent policy. The discussion takes place just a couple of months before he retires. On July 1, he will pass his responsibilities as executive vice president and managing director of L’Oréal’s research and development — employing 3,280 — to Laurent Attal.

“It’s interesting because fundamentally between all these presidents there is a common point, an Ariadne’s thread — that research was always developed and protected by them,” says Grollier.

Part of this support takes the form of funding, which was at around 580 million euros, or $853.3 million at average exchange, 3.3 percent of L’Oréal’s total sales last year.

“In 10 years, the amount of money consecrated to research doubled, and the percentage of money for research versus sales has regularly increased,” says Grollier.

Some of those funds were channeled into the opening of laboratories specifically to study living tissues.

“It permitted new disciplines to enter,” says Grollier, adding that, by putting a chemist next to a biologist, a new dialogue evolves. “Often, in the interface between the disciplines important things take place.”

In order to have the ability to give qualitative evidence about how its products work, L’Oréal began to develop measuring devices and also simulators that can gauge performance under real conditions. So, for instance, to find how hair color will wear in everyday life, the company puts hair through simulations that can involve everything from exposure to light, washing and pollution.

Knowledge isn’t just gleaned in the company’s labs in France. As Owen-Jones began a major international push of L’Oréal’s business in the Nineties, Grollier rolled out evaluation centers in key geographic zones, including the U.S., Japan, China and Brazil.

“Creating the laboratories allows us on the ground to better study a country’s men and women,” he says. That includes examining their hair and how a product wears under local climactic conditions.

As a result of such work, L’Oréal has accrued a deep pool of knowledge, he explains.

“We know regional characteristics,” says Grollier, adding that they include everything from hair, skin and eyelashes to lips. “That gives us a database that’s absolutely extraordinary because there are big differences.”

A woman in Asia typically makes 60 strokes of mascara per eye, whereas in Europe she generally makes 10 strokes, for instance. Sometimes, an evaluation center is followed by a lab, which can then potentially create new products for the worldwide marketplace.

In April 2008, Grollier founded an innovation department charged with anticipating new trends and working with the labs at an early stage. Grollier says this was the formalization of what has always been fundamental to the company.

“Monsieur Dalle said one day, ‘Embrace the new,’” says Grollier. “It’s a phrase that everyone [in the company] knows, that everyone applies.

“I have always known for there to be an immense osmosis between the laboratories and marketing at L’Oréal,” he continues.

Sometimes it’s the brands’ marketing departments that ask the labs for developments, and other times it is the labs that propose findings.

“It’s not marketing that asked if there is a UVA filter,” says Grollier. “No one knew even that UVAs were dangerous. It is the labs that discovered that and made specific filters and proposed this concept that is very important because it touches on a health problem. We have a fantastic vigilance regarding everything that is health related.”

To keep as many findings as proprietary as possible, Grollier instigated a rigorous patenting policy. Within the past 12 years, the company has registered more than 5,000 patents, for example.

“I wanted us to protect our inventions,” he says, adding that some of them, like certain molecules, can be found in L’Oréal products decades after they were first created.

Also, in the Nineties, Grollier opened labs to study how L’Oréal’s raw materials and finished products affect water, air and soil. Such moves aided the company to produce products that respect the environment as much as possible, he explains.

In step with the changing face of the cosmetics industry, Grollier has opened various product categories for the group. In 2002, for instance, L’Oréal teamed with Nestlé to create the Innéov brand, with ingestible cosmetics. Then, in 2006, the company acquired Sanoflore, an organic brand. “A holistic vision is very important,” says Grollier.

Among the discoveries he is most proud of is the creation of reconstructed skin. In 1988, Grollier and Owen-Jones decided the company would stop testing finished products on animals. Grollier says reconstructed skin brought two main attributes: security and a model on which the company can test the efficacy of its products.

“Today, we can continue to innovate despite the restrictions put in place [regarding animal testing],” says Grollier, who has opened a laboratory in China to create reconstructed skin with Chinese keratinocytes.

So what does Grollier expect for the future of his trade?

“I think that the big innovations will continue to be born from biology — the new biology,” he says. “That is to say, everything that is the knowledge of the living.”

Grollier believes the cosmetics industry will benefit from new sophisticated and intelligent materials stemming from different disciplines, such as the aeronautic and electronic fields, plus discoveries from the world of medicine.  From the latter, Grollier envisions how, for instance, personal diagnosis might evolve in the world of cosmetics.

“That is to say, diagnostic that allows not only to know in what state you and your skin are in but, above all, to predict in what state it will be in upcoming years and probably — by personally adapted treatments — stop or slow down this evolution,” he says.

“But there is something I read one day that marked me,” says Grollier, adding that it made him think of Eugène Schueller creating the first of what would become a series of hair dye innovations. “‘Utopia today is the truth of tomorrow.’ I find that phrase extremely interesting.”