New York — Dove, long billed as America’s beauty bar for nearly half a century, thinks 50 is fabulous— even in the face of our country’s youth-obsessed culture. Guided by that sort of plucky spirit, the Unilever brand is taking... 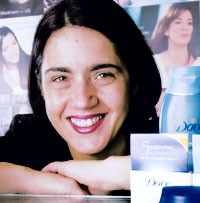 New York — Dove, long billed as America’s beauty bar for nearly half a century, thinks 50 is fabulous— even in the face of our country’s youth-obsessed culture. Guided by that sort of plucky spirit, the Unilever brand is taking a bold step to challenge societal views on age, body shape and race, through a global advertising campaign that will debut Oct. 15.

She clarified that the campaign, which spotlights real women, is not about self-acceptance.

“At Dove, we have a simple mission, to make more women feel beautiful every day,” declared Lagnado at the campaign’s launch event held here Sept. 29.

Dove has always striven to speak its marketing messages through real women, but never this loudly. And, while Lagnado, whose career at Unilever spans 17 years, admits there was some anxiety about breaking form, she seems confident that Dove can promote a broader definition of beauty and grow the brand at the same time. In her view, a closer tie to everyday women “makes the brand positioning more expressive, and more confident.”

Dove launched a similar effort last spring in the U.K. with a product ad for Dove’s firming lotion. The billboard featured six women of various body types confidently posing in their underwear. The ad, photographed by Ian Rankin, touched off a media furor and sparked a debate about society’s narrow definition of beauty, particularly concerning everyday women with real bodies. Largely due to that reaction, Dove launched a global effort to spotlight ordinary women. Several British newspapers, have reported sales of the firming lotion featured in the U.K. ad doubled within a month after the billboard appeared.

For the international successor to Dove’s U.K. campaign, the company worked with Rankin and Ogilvy & Mather to create five print ads that each feature a woman, all nonmodels recruited from different walks of life, and ask the viewer to make a judgment about her looks. The ads present viewers with a choice, effectively asking them to define beauty by choosing one of two responses.

In one ad featuring a 96-year-old African-American woman named Irene, Dove asks, “Wrinkled? Wonderful?” followed by the question, “Will society ever accept old can be beautiful?” Another, picturing the voluptuous Tabatha, offers the choice, “Oversized? Outstanding?” and poses the question, “Does true beauty only squeeze into a size 6?”

Dove does not intend these questions to be rhetorical only: The beauty brand has provided a public forum for consumers to cast their votes. Each ad directs women to Campaignforrealbeauty.com, a Web site launched by Dove that contains discussion boards and research studies about beauty. An electronic billboard in Times Square, slated to be unveiled Oct. 15, will keep a running tally of the votes.

However, some advertising insiders view the campaign as more philanthropic than revolutionary. Trend expert David Wolfe, creative director of Doneger Creative Services, commented that it may work as a gimmick or novelty, but that Dove’s ads featuring “real women” does not represent a brewing trend. “We are so driven to worship perfection, which at the moment happens to be in the guise of celebrities,” said Wolfe, adding that, while celebrities do have their flaws, they have a glow of perfection.

Dove, intrigued by women’s notion of what beauty really is, commissioned a global study called “The Real Truth about Beauty: A Global Report.” To conduct the study, the beauty brand partnered with research firm Strategy/One in collaboration with Dr. Nancy Etcoff and the Massachusetts General Hospital/Harvard University Program in Aesthetics and Well Being, and Dr. Susie Orbach of the London School of Economics. Study participants, some 3,200 women from 10 countries, dished via telephone on their feelings about beauty and their takes on mass media and pop culture’s impact on it.

“Beauty is a big word and somehow it has shriveled to a narrow definition,” noted Dr. Etcoff, author of “Survival of the Prettiest.”

The report’s most startling finding, according to Dove, is that only 2 percent of the women surveyed consider themselves beautiful, and only 9 percent feel comfortable describing themselves as attractive. Some 49 percent responded that women who are more beautiful have greater opportunities in life. And, while they allege the media consistently bombards society with images of idealized women, the majority of respondents strongly agree beauty can be achieved through attitude and spirit. What’s more, 85 percent said every woman has something beautiful about her.

The launch event here included a six-member panel discussion cohosted by American Women in Radio and Television, with several female executives in the entertainment industry, among them Mindy Herman, former president and chief executive officer of the E Network who recently took over the helm of media consulting firm LTM Consulting, and Andrea Bernstein, vice president of Oxygen Media.

Debate is intended to be an integral part of this campaign, explained Lagnado; the brand will continue to host similar panel discussions throughout the fall — in Atlanta this weekend and in Chicago Nov. 12-14.

Campaign For Real Beauty spotlights brand positioning only, and will not extend to include any products, said Lagnado. In her view, a marketing campaign can be both altruistic and effective at growing sales. “If it touches women’s hearts, it will work,” she said.