NEW YORK — Body lotions are morphing into a 24-hour business, with players such as Olay, Curel and Jergens touting formulas that keep skin moisturized the entire day. Dove has entered the category with a line of long-lasting lotions of its own... 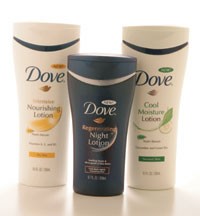 NEW YORK — Body lotions are morphing into a 24-hour business, with players such as Olay, Curel and Jergens touting formulas that keep skin moisturized the entire day. Dove has entered the category with a line of long-lasting lotions of its own called Body Nourishers.

Unilever, Dove’s parent, plans for Body Nourishers to become the number one brand in the hand and body lotions category. Since launching in the U.K. five years ago, Dove body lotions have posted double-digit sales growth each year, earning them the number three spot in the category.

What separates Dove’s 24-hour moisturizers from the rest, said Philippe Harousseau, marketing director for Dove, U.S., are formulas that “go beyond the standard moisturization and nourish the skin.”

Each of the five products in the line is formulated with 24-hour Nutri-Serum, described as a blend of hydrating ingredients and essential nutrients. Said to bolster skin radiance, Nutri-Serum contains high levels of glycerin, grape seed and green tea extracts, vitamins and minerals, such as magnesium and zinc.

Harousseau declined to comment on sales targets, but industry sources expect Body Nourishers to generate $60 million to $70 million in first-year retail sales — which would make the line the largest launch in the category this year.

As part of the effort, the brand will bring two proven winners from the European market, Dove Intensive Firming Lotion and Cream, to the U.S. An ad for the products — a billboard featuring six women of various body types confidently posing in their underwear — sparked a flurry of debate about society’s narrow definition of beauty, which was exactly Dove’s intention.

“That bold statement is in keeping with what we do on a global basis and what you can expect to see from Dove on this launch,” said Harousseau, adding, “In a category where everything is about perfection, Dove will help women to love every single inch of their skin.”

He continued: “The launch has had a wonderful impact in terms of business performance and in the way it was adopted and appreciated by women.” When they were introduced last year, the firming products augmented Dove’s exiting four-year-old body lotions business in the U.K. Here, they will help introduce the Dove brand to the category.

Dove launched its Cool Moisture range in January as a body wash and beauty bar. Cool Moisture Lotion, like its predecessors, is designed to impart a “fresh, cool feeling,” to the skin.

The Regenerating Night Lotion, which contains honey and “micropearls” of shea butter, is said to work best in the wee hours when the skin’s condition is most receptive for repair and moisturization, explained Richard McManus, Dove’s senior development manager. The company’s consumer research revealed that women use moisturizers formulated for nighttime use because of the efficacy of such products. Others, however, steer clear of nighttime lotions, complaining that they can be sticky and greasy. “Dove’s Night Lotion is quite elegant to meet the aesthetic needs as well as address nourishment and moisture,” said McManus. The products range in price from $4.99 to $8.49 each.

Dove’s expansion into new categories — such as deodorant, skin care and hair care — helped push Dove’s sales up nearly 25 percent in 2004, according to the company.

Harousseau said, “This is an important launch for us. Dove will develop and lead the premium segment of the hand and body lotions category.”