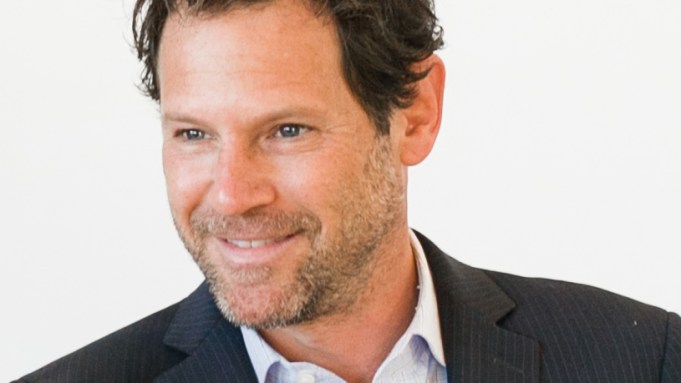 “I’m compelled to draw,” said Mark Ferdman. Until recently, he acted as chief creative and marketing officer of hair-care company DpHue. “I doodle a lot.”

The very first piece he vividly remembers creating is an image of a clown. “I was 4 years old, and I got a lot of praise for it,” he said. “I guess I started building self-esteem around that.”

He enrolled at School of the Art Institute of Chicago in the early Nineties, while simultaneously pursuing a career in marketing.

He’s had one foot in each world ever since.

“It’s a very common balance for people who create,” he said. Previously, he was vice president of global consumer engagement for Origins. “It’s a lot easier to make money in the commercial work. But obviously, you’re much more free when you’re just creating for yourself.”

Through the years, as he’s risen through the beauty ranks, sketching has been an outlet.

“I do feel like it’s out of some form of frustration at having to, I guess, put up with the restrictions that are put on me as an artist in doing stuff in more of a commercial world,” Ferdman said. “There are so many people and factors that stunt creatively within the beauty space, politics, budgets. It’s very difficult to have a vision in beauty, creative and marketing, and not have it get altered.”

As a teen, he was highly inspired by cartoons and caricatures, particularly by the content in Mad magazine and the work of American cartoonist Robert Crumb. He was also drawn to Impressionism and Cubism, artists Henri de Toulouse-Lautrec and Marc Chagall. He finds himself creating sketches of pop culture figures, from Vladimir Putin to Bob Dylan, often in the style of Amedeo Modigliani. He posts much of his work on Instagram, @ferdman.

“I used to start drawing things I saw in ads or television, sort of pop art but in my own little cartoony style,” said Ferdman.

Ferdman, who lives between New York City and L.A., has started painting more during shelter in place. “Because we’re home, and COVID-19, and I’m spending a lot of time in L.A., and I’m kind of isolated, I decided I’m going to paint.”

He recently found a Moleskine sketchbook from the Nineties, filled with drawings he created at the time. One of them — done in 1995 — caught his eye, and he decided to re-create it on a larger canvas.

He describes the work as “these white guys in suits hovering over North America.”

“In 1995, I was 25 years old in art school, and I guess I felt pressure to jump into something that felt scary. There are several images I could have painted from that book. I guess I still feel the same. It’s such an anxious time right now.”

The piece is both personal and political, he said. It also brought to mind another drawing that featured the very same figures. Instead, the men are blowing bubble gum.

“I think it was an election year,” he said of the illustration. “If you look closely there are little donkeys and elephants, representing Democrats and Republicans, lost in those little flowers in the background…There’s something about these white guys in suits. I don’t know why, and I don’t know what I was saying, but that’s who I was drawing.”

Despite limitations, the commercial world has allowed him some form of creativity, he shared, and in beauty, the visuals are beautiful.

In the end, “marketing is close to art. You use creativity, visuals and messages, which again is art,” he continued. “Even if I started making a lot of money selling art, I wonder if I’d want to take on more traditional work, because I’d miss it.”