After Clarisonic, Dr. Robb Is At It Again

The founder of Clarisonic is out with a new skin-care appliance — and single-serving retinol products.

Dr. Robb Akridge, the founder of Clarisonic, is about to bring a new beauty system to the market. 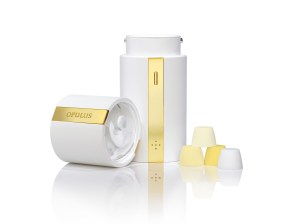 “There are some major issues with traditional formulations,” said Akridge, ticking off potency and easily degradable active ingredients as problems on a Zoom call from his home lab in Kingston, Wash. “Traditional ways of formulating aren’t getting the consumer the results they want … what we’re really doing is breaking the bottle.”

Akridge’s new system includes a small machine called the Opulus Activator, as well as “opoules” — small, gumdrop-looking ingredient capsules that are whipped into skin-care form when placed in the Activator. Think Nespresso, but skin-care.

The opoules have a hard shell exterior and soft center meant to separate active ingredients until just before application. The idea is to maximize the potential of time-tested ingredients, like retinol, by “basically separating the ingredients until it’s go-time” for “peak potency,” Akridge said.

Once an opoule is placed in the Activator, it is heated to 120 degrees over about 45 seconds and whipped by blades in the machine before emerging a complete — and warm — skin-care product.

“Our vision is to take what’s beloved out there, what’s already great, and see how, with new chemistry, we can elevate that and do a new generation of products,” added Michelle Balmer, Opulus’ chief brand officer.

The company’s first product is a three phase, 12-week system called Retinol Ramp Up, where consumers go through pre-dosed retinol night balm treatments, as well as sleep masks for retinol breaks. The system is set for a September debut, and will cost between $325 and $425 for the an Activator and opoule starter kit.

Initially, the products will launch online, but the company is in talks with retail partners, Akridge said, and is considering the professional channel, where Clarisonic was a big hit, too.

Akridge has been working on Opulus Beauty Labs for several years, but things ramped up when he left Clarisonic six years after selling it to L’Oréal. Opulus is backed by a group of angel investors, he said, and eventually will look beyond the retinol program to other single-serving skin-care products, and potentially consider brand partnerships.

“People know me for devices, but the thing is to get a lot of synergy out of a product, you need to tweak the formula so it has a different form factor, and you need to tweak the way people are using it,” Akridge said. “Some of the things we’re thinking about are a combination of both. We have to think about how women are using it, we have to know their habits. We’re looking at all aspects of beauty right now.”

Can Beauty E-commerce Sales Make Up for Store Closures?