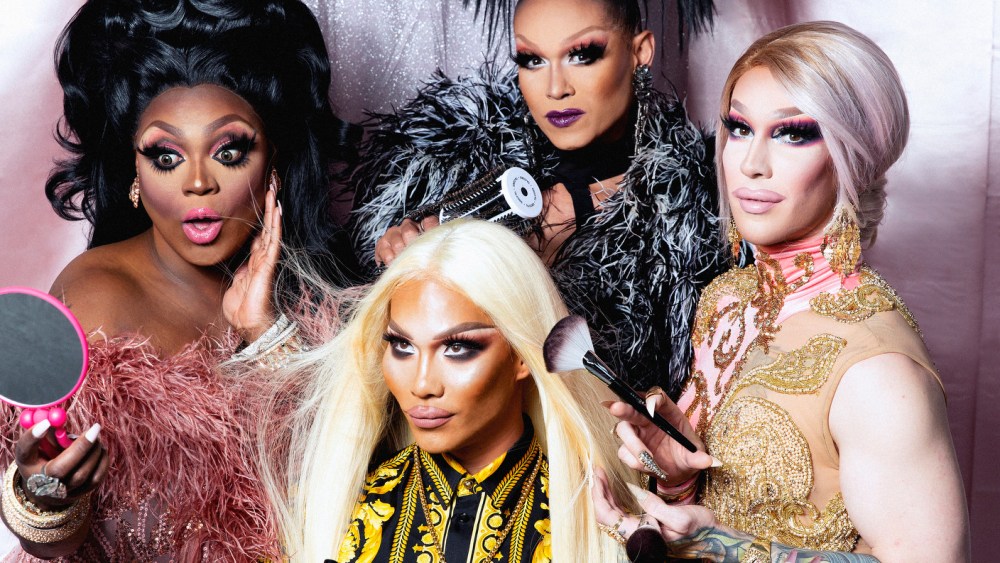 “To win this competition, you’re gonna need to be more enterprising than Donald Trump, to give bigger than Oprah and to be hotter than Tyra [Banks] wearing a fat suit in July.”

Such was the criteria, as stated by RuPaul a decade ago, for the first contestants of “RuPaul’s Drag Race,” a competition-style show in which select drag queens compete for the title of America’s Next Drag Superstar. Since its premiere on the Logo network in February 2009, the show has become a cultural touchpoint within the drag community — and beyond. Its latest season, season 11, averaged 926,000 viewers an episode, according to data from Nielsen. In October, it will launch a U.K. version.

“Drag Race” has given rise to and put the spotlight on the world’s top drag queens, displaying their close relationship to the beauty world in the process. Its global growth runs parallel to an Internet phenomenon that is increasingly taking cues from and celebrating LGBTQ culture. This summer alone, the “And I Oop” meme from former “Drag Race” contestant Jasmine Masters went viral on social media, and Eugene Lee Yang’s “I’m Gay” video became one of the top-viewed coming out videos of all time on YouTube, raising more than $114,000 for The Trevor Project. Last year, drag content performed so well on YouTube that the platform featured Trixie Mattel and Katya Zamolodchikova in its YouTube Rewind.

Over the past few years, drag queens have come to make up more than just a niche community. They are true arbiters of pop culture, masters of camp and lovers of makeup. They are, as Randy Barbato, an executive producer of “Drag Race” and cofounder of World of Wonder Productions, which coproduces RuPaul’s DragCon, put it, “the new pop stars.”

Drag queens are also at the root of some of the most popular makeup trends today and were contouring, baking and highlighting well before any YouTuber or Kim Kardashian. It makes sense, then, that RuPaul’s DragCon, a three-day convention that will kick off its third New York City iteration on Sept. 6, has become a beauty destination of its own.

“We’ve always attracted makeup brands and wigs, obviously, and jewelry and crowns and accessories,” said Fenton Bailey, also an executive producer of “Drag Race” and cofounder of World of Wonder Productions. “It has anything and everything to do with the transformation. It’s interesting as the show gets bigger and the audience gets bigger how the brands and the vendors who participate in DragCon have broadened from the more extreme brands that focus on corsetry or undergarments to more mainstream fashion brands. That speaks to the more mainstream brands being less afraid of what drag used to represent versus what drag truly signifies.”

Wet ‘n’ Wild, Pop Beauty, Mally Beauty and Sugarpill are among the beauty brands slated to exhibit at DragCon NYC in September.

Claudia Soare, president of Anastasia Beverly Hills, which has been a sponsor of both “RuPaul’s Drag Race” and DragCon, said she sees DragCon becoming “the next makeup show.”

“DragCon has grown so much even in the last two years,” she said. “It used to be a very niche demographic that was particularly coming there for the queens and now it’s mainstream, [for] everyone. It’s becoming a big show for beauty, accessories, lifestyle.”

Drag queens, too, are capitalizing on their makeup expertise, using DragCon as a launch pad for their own lines. Miss Fame debuted her beauty brand last year at DragCon NYC. In May, Trixie Mattel launched her cosmetics line at DragCon LA, which also premiered an Aquaria x NYX collaboration and an Alyssa Edwards and Anastasia Beverly Hills one. Mattel and Kim Chi have both previously collaborated with Sugarpill, and over the past two years, an increasing number of drag queens have appeared in fashion shows and beauty campaigns.

And for good reason. Queens have been inventing and exchanging fashion and beauty hacks for decades. On set for WWD’s cover shoot, former “Drag Race” contestant Mariah Balenciaga revealed she bought her wig — well, part of it, anyway — at a 7-Eleven.

“It’s literally a Big Gulp cup with human hair eight-inch tracks glued to it in a spiral,” she said. “It’s one of those tricks of the trade.”

Naimie’s is one beauty store frequented by some of Los Angeles’ top drag queens. Located in Valley Village, Calif., the two-level shop carries a wide assortment of brands, including Lime Crime, MAC, Huda Beauty, Dose of Colors, Anastasia Beverly Hills, Nars, Smashbox, Bobbi Brown, Kat Von D and NYX. Two walls on the top floor are dedicated solely to false lashes, and customers can buy supersized versions of products, such as a one-liter bottle of Kiehl’s Creme de Corps for $78.

Given the amount of product they go through on a regular basis, buying in bulk and on the cheap are important for drag queens, who are some of beauty’s biggest consumers. Mayhem Miller (“Drag Race” season 10) said she requires a backpack to hold all of her makeup products. Her go-to for eye shadows and blushes is La Femme because it’s so affordable.

“It’s an old brand, it’s been around for years,” she said. “The pigments are great and it’s very affordable, very cheap.”

Balenciaga said she uses at least 50 products to create her full look and has also placed extra emphasis on skin care and antiaging from the start.

“I did a lot of preventative when I was younger because I was also in the ballroom scene and my category was face,” she said. “It was about making sure that your skin was smooth and flawless, so I did laser hair removal, chemical peels and microdermabrasion. That helped me get ahead of the curve when it came to aging.”

Kameron Michaels (“Drag Race” season 10) estimated using 30 products at a minimum, including four foundation shades for her face. She began wearing makeup after experiencing bad acne when she was younger.

“My mom took me to Dillard’s or J.C. Penney’s or something to buy some concealer to try to conceal the acne I had on my face,” she said. “I thought my mom would have known this, but she didn’t buy me any setting powder, so I would fall asleep on my desk at school and wake up and there would be a sheet of concealer on my paper. That was very embarrassing.”

A product she has yet to encounter is one that will allow her to grow a beard and still do drag.

“I love having a beard as a boy and if there were some magical cream or some magical something that I could keep my beard and still do drag without looking like I have a beard, that would be amazing,” Michaels said.

Similar to Michaels, Kimora Blac’s (“Drag Race” season 9) earliest makeup experience occurred when she was 10 years old and had her first acne scar.

“I had the biggest pimple you could ever think of — I thought it was a bug bite,” she recalled. “Popping your first pimple is the worst thing in the world [and] I couldn’t even go through the pain. My mom pulled out foundation and applied it on my entire face and I was so excited, I never wanted to let foundation go. What happens in the house stays in the house, but me and my mom, we laugh about it all the time.”

She often shops online for makeup and accessories — she bought her platinum blonde wig for WWD’s shoot online. Her aesthetic, she said, is plastic surgery.

“I love Botox, plastic surgery, I love reassignments, I love the confidence behind that person,” she said. “When I do my makeup, I try to mimic me having so much plastic surgery without even having plastic surgery. Also, I love looking bitchy and bronze and highlight and lashes.”

The queens typically spend hours applying their makeup — Miller insists she can do hers in 30 minutes flat, if need be — but taking it all off is a different story. Buying packs of makeup remover pads or, if you’re really dedicated, investing in a double-cleanse method, adds up. To cut back on costs, hacks are necessary — and sometimes, one need not look further than the kitchen sink.

“A lot of people laugh at me because they’re like, ‘What do you use to take off your makeup?’ I always tell them dish soap,” Miller said. “I use Dawn or Palmolive. If it’s good enough to clean dishes and keep your hands still intact, it’s gonna be good to take off the makeup as well.”

They Are Wearing: RuPaul’s DragCon