The retailer has unveiled a glittering beauty concept at 40 Wall Street in downtown Manhattan. 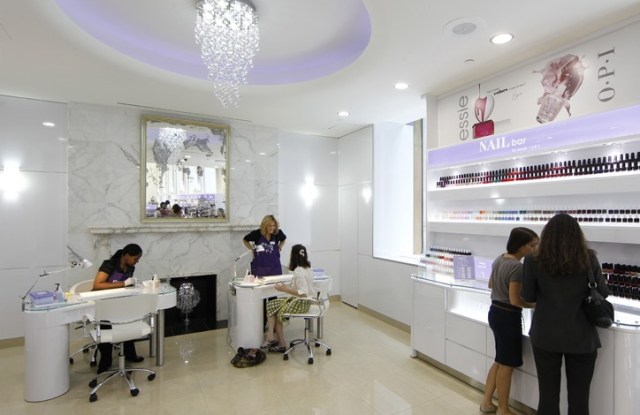 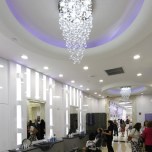 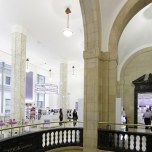 Duane Reade wants to eat department stores’ lunch — at least when it comes to beauty.

The retailer has unveiled a glittering beauty concept at 40 Wall Street in downtown Manhattan. Inside a vast, vaulted hall with marble arches lies an express hair salon, nail polish bar, virtual makeover station and fragrances galore. The 22,000-square-foot store is Duane Reade’s largest outpost and marks the drugstore chain’s — and perhaps the industry’s — most dramatic attempt to reinvent the sector’s beauty department and gain market share from department stores. They still have a long way to go, however, especially in fragrance: In 2010, department stores held a 47.6 percent share of U.S. fragrance sales, which totaled $5.3 billion, while drugstores accounted for 9.8 percent of overall sales, according to Euromonitor International.

Duane Reade’s new design, housed in an old bank, builds upon its upscale beauty concept called Look Boutique, which the chain introduced nearly two years ago. Currently, there are 21 stores outfitted with the assisted, open-sell concept.

“This is the Look Boutique on steroids,” said Joe Magnacca, president of Daily Living Products and Solutions of Walgreen Co. and president of Duane Reade, as he passed by the store’s fresh juice bar and sushi counter (fresh rolls are made daily) and through an aisle of organic cereals en route to the beauty area.

Within the store, additions to the Look Boutique concept include the Phyto Universe, a three chair salon that offers hair and scalp analysis, treatments and blow-dry services; a professional hair tools display, where shoppers can test out high-end flat irons, curling irons and blow-dryers; the EZ Face “Find Your Look” makeover tool, which allows a customer to snap a digital photograph of herself and then virtually apply products found in the store simply by scanning the bar code; a fragrance display that spritzes 40 scents onto blotters or wrists, and the Nail Bar by Essie-OPI housed in David Rockefeller’s former office (complete with his fireplace). Service prices range from a $10 manicure to $65 for a Phyto treatment, with blow-dries hovering at around $40.

Magnacca said Duane Reade had big plans for this site before the metro New York chain was acquired by Walgreen last year. The Wall Street store also is manned by at least one beauty adviser 24 hours a day, and during peak traffic five are on hand. Each adviser undergoes a six-week training program, said Magnacca. Higher-end beauty brands in the space include Gosh Cosmetics and Pür Minerals, Blow and Barex hair care, Roger & Gallet fragrances, Butter London nail care and This Works and Tan Towel skin care. In the fragrance area, high-end brands — many of which are found in department stores — abound, including Burberry Touch for Women, Viva La Juicy from Juicy Couture, Mariah Carey’s Lollipop Bling, Hugo Boss and Lagerfeld Classic.

Inspired by European pharmacies and Shoppers Drug Mart in Canada, U.S. mass market retailers in the last three years have introduced a spate of new, upscale concepts intended to lure prestige brands into their heavily trafficked doors. In late 2008, CVS Pharmacy was the first U.S. drugstore to unveil its assisted, open sell concept filled with niche, specialty brands. Duane Reade followed in 2009 with Look Boutique, which ultimately caught the attention of Walgreens. The parent group is now weaving elements from Look Boutique into its remodeled stores, including colorful nail polish fixtures stocked with Essie and OPI shades, in a bid to draw in a younger consumer.

Duane Reade’s efforts to revamp its image — a history of messy, overstocked stores and poor customer service had left its brand equity in tatters — have caught the attention and even praise of hard-to-please New Yorkers over the last several years. They have also helped to bolster sales. Magnacca said sales at remodeled Duane Reade stores surge anywhere from between 10 to 40 percent, even as the retailer cleared windows of products and decluttered its aisles.

Despite the high drama of the new megastore, Magnacca said, “We test and we play with new concepts and where it makes sense, we apply it to smaller stores” throughout Duane Reade and Walgreens. “Our number-one store used to be in the Twin Towers and we’ve been trying to get back into the area for some time.” Duane Reade does have several stores located nearby, including one on the same block that was shuttered Tuesday evening and absorbed into 40 Wall Street. The other Duane Reade stores in the area will remain open. “You can have a Duane Reade two blocks away and it will not cannibalize store traffic,” said Magnacca of the New York City market.

There are some editorial elements within beauty as well. Beauty books are featured among premium brands, as well as display headers that read: “Our Pick,” “Our Fave” and “Our Hero.” The area leads seamlessly to a heavy offering of mass beauty brands, ranging from Revlon to Iman in cosmetics, to L’Oréal to Yes to Carrots in skin care. Product testers, mirrors, tissues and cotton balls are placed throughout the store.

This represents the latest in Walgreens’ and Duane Reade’s thinking about how to capture a greater share of beauty. Walgreens aims to take the best from Duane Reade’s approach to beauty, while amplifying its strengths — including its pharmacy operations — across its more than 7,600 stores. Both retailers continue to open remodeled locations that shine a spotlight on the category.

“We see this as a coming together of the two brands,” Magnacca said, adding this is the first store with a pharmacy powered by Walgreens.