Diane von Furstenberg’s latest beauty incarnation is gaining traction, with sales in 27 doors said to top $10 million at retail annually in the U.S. 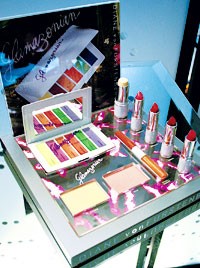 NEW YORK — She is beauty’s most flamboyant phoenix.

Designer Diane von Furstenberg, who first tackled beauty in the mid-Seventies, is finding that her latest incarnation in the category is gaining traction, with sales in just 27 doors said to top about $10 million at retail annually in the U.S.

And after a nearly 20-year hiatus from the category, one of beauty and fashion’s most resilient designers has definitively proven that you can step into the same river twice.

“I am at a point in my life where I am on my second career — and when you’re on your second career, you’re a little bit more relaxed and you have this thing called experience, which is useful,” said von Furstenberg during an interview Wednesday afternoon at her West Village atelier.

“I was successful with my little dresses, but I so much wanted to be in beauty,” she recalled of the early Seventies. The desire crystallized on the eve of a personal appearance in Los Angeles when her makeup bag disappeared. “At that time, young girls wore a lot of makeup, so not having it was a tragedy,” she said with a wry smile. “I went to the makeup counter at I. Magnin, and everything looked so old.”

At the time, von Furstenberg purchased many of her cosmetics at a theatrical makeup shop in New York. Upon her return to Manhattan, she “raided” that shop for colors, and called her friend Sylvie Chantecaille for advice on creating her own color line. “I was so naïve and so stupid — I created a full makeup line and all of my distribution was my own shop on Madison Avenue,” von Furstenberg remembered. “I didn’t want to sell department stores because I was terrified. Thinking back, how could you have color cosmetics for one door — but I was doing so well in fashion, it made sense.”

Next came Tatiana, a provocative floral juice with a bouquet of white blooms, including roses, jasmine and honeysuckle. “I did Tatiana with a stock bottle, and I had hangtags on my dresses with packets of the fragrance,” she said. “I started to sell department stores and that was successful. Then, in 1979, I licensed my dress business and decided ‘I’m going to be [the next] Estée Lauder.’ I moved from the garment district to 57th Street and Fifth Avenue, hired Gary Savage, and in five years we created the most dynamic, fantastic makeup line with fantastic colors. Within five years, the color and the fragrance were a $50 million business.”

This story first appeared in the September 10, 2004 issue of WWD. Subscribe Today.

The Belgian-born designer also released a book entitled “Diane von Furstenberg’s Book of Beauty,” and by the early Eighties had added a second scent, Volcan d’Amour.

But while on the surface it seemed that the designer was flying high, her beauty business was headed for a crash. “I hadn’t realized that the man I had handling the finances had borrowed a lot of money to achieve all of this, and one day I was asked for my personal guarantee [for financing for another project],” said von Furstenberg. “I didn’t want to lose my house, so I sold my business.”

Von Furstenberg sold to Beecham Pharmaceuticals in 1984, and eventually Revlon ended up with the rights to her name for beauty. “When I sold to Beecham, I had no control over anything,” von Furstenberg said in 2002. “Everything became a license, people weren’t listening to me and the brand deteriorated.” Eventually the new owners took von Furstenberg’s fragrances into mass, and then they exited the market altogether.

Still, despite the rise and fall of her first beauty business, von Furstenberg hadn’t given up on the category. Showing the same pluck and determination that she’d exhibited in reviving her apparel prospects, von Furstenberg in 1994 repurchased the rights to her name — and those of Tatiana and The Color Authority.

But von Furstenberg was in no hurry to rush right back into beauty, despite her passion for it. Deciding that she wanted to rebuild one empire before starting on a second, the designer focused her attention on her apparel business for much of the Nineties. Once she was satisfied with the progress of her clothing line, von Furstenberg began to give serious thought to a second act for her beauty business.

That act came to the stage in May 2002, when von Furstenberg signed her current deal with Inter Parfums. The beauty license includes color cosmetics and fragrances, which first hit retail about this time last year.

Despite her past experience with licensing, von Furstenberg was confident about the new deal. While she had other offers, von Furstenberg said she was most swayed by Jean Madar, chairman and chief executive officer of Inter Parfums. It’s an admiration that is shared by Madar, who this week said of von Furstenberg, “What I really like and admire about Diane is the broad scope of her points of interest, which is very unusual for a designer. She’s the only designer I know who can speak about product, design, formulas, finance and the big picture with the same amount of passion for each individual point. Diane loves details, but also understands the macroeconomy of business. She’s more than just a designer or just a celebrity or just a businesswoman. She’s all of those things, and more.”

As well, Madar was open to von Furstenberg’s desire to be intimately involved in product development, which was also key for the designer. “I wanted to go with a company that would allow me to be in the kitchen,” she said. “This industry is driven by giants. It’s an interesting opportunity, to be small and to find your niche among the cracks.”

Von Furstenberg’s first order of business was to analyze the market and note how it had changed. First, she observed, much of the Nineties, in the beauty industry, was devoted to makeup artist lines. “Mine is not a line that’s created by a makeup artist,” she said. “It’s a line that’s created by a woman — it’s woman to woman. The point is not to be intimidating. It’s pragmatic, simple and easy to understand.”

As well, beauty had become decidedly more corporate. “The companies now are bigger and the launches are bigger — people are spending more,” she said. “It’s discouraging in a sense. But at the end, there’s room in the cracks.”

What women wear on their faces has changed too. “Young people wear a lot less makeup now,” she said. “In my youth, you wouldn’t have dreamed of not wearing a lot of makeup. If you slept with a guy, you worried about him seeing you without your makeup the next morning. We wore eyelashes and all these ridiculous things. There is less makeup today. Young girls today are applying lip gloss when they’re on the phone. But at the end of the day, women are very much the same. In the intimacy of a fitting room or a mirror, they are very much the same. And I always say that makeup is the secret between the woman and her mirror, and I try to give her tools to be able to smile at her shadow.”

As such, von Furstenberg was absolutely adamant about offering color cosmetics, although most designers have avoided the category and its high costs. “Color is my business,” she said forcefully. “That’s what I do. My fashion has a different color palette every month, and I design 20 prints a month. Color is something that is clearly what I know well, so doing a color line was very important to me. It is an expensive business — but then again, they’re all expensive. It’s a matter of finding the right niche and the right place.”

It’s a niche that ties neatly into her popular ready-to-wear collections. Her latest color collection, Glamazon, is on counter now and is tied to her fall 2004 apparel collection of the same name. “It’s war paint — I think this one is more of a collectible that you buy and have fun with, but don’t necessarily repeat,” she said. Her spring 2004 collection introduced cheek and lip colors and was tied to that season’s apparel collection, In the Mood. “It was inspired by the Twenties — lots of pale silvers and pinks and iridescent colors,” she said.

Going forward, von Furstenberg said, the marriage between her fashion and beauty sensibilities will become even more apparent, with makeup bags likely to feature fabric prints from her apparel collections.

On the fragrance front, von Furstenberg currently includes a chypre scent called D. “The idea is to do a collection of fragrances — D is out now, and we will probably do a V and an F at some point so that we have all of the letters of our alphabet,” she said. And make no mistake: They will all be women’s scents. “I am very much oriented toward the women’s market,” she said. “I think I know what women want. I don’t know what men want.” Still, von Furstenberg is a fragrance loyalist. “I’m a faithful person, especially to fragrance. So I don’t really like to change, because fragrance becomes a part of your personality. But there are different people, with different tastes, so it makes sense for us to offer more than one fragrance.”

One regret, though, is that Volcan d’Amour, launched in the early Eighties as she was selling her first beauty business, didn’t have a chance to fully bloom. “My code name for that one was Deadly Feminine,” she recalled. “That fragrance launched at the moment that I was selling the company. So it was a volcano that never erupted. I still have 10,000 bottles in my garage — I love it so much I don’t want to part with it. And the bottle was amazing — you could kill someone with the bottle!”

The brand will roll out to Henri Bendel’s upcoming Ohio door in November, as well as to Printemps in Paris in October. “I would like [to offer] things that I think are cutting-edge, including bags, accessories, skin care, tools. And right now we are embryonic in terms of our potential. But Jean [Madar] and I are in no rush.

“I would like the beauty to be a big part of my stores. We have four [fashion stores] now, but plans for a lot more. I’d love to do beauty-only stores, but we’d need a lot more products. I think [beauty is] a business I know well because the first time around I did it on my own. I would like to become a major beauty destination. But it’s not about numbers — I just want the products to be great and to be important.”