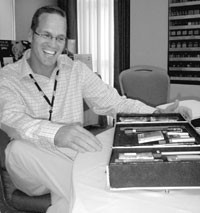 The Cosmetics Conference held here at the Westin Diplomat Resort & Spa, July 25-28, drew a gaggle of cosmetics and cosmetic accessories manufacturers, all of whom will compete for space along the cosmetics wall. A bulging exhibitor list prompted show planners to once again add on a Power Hall, a room filled with nearly 20 vendors where meetings were cut in half from the standard 20 minutes to 10. The shortened meetings in the Power Hall allowed ECRM to accommodate last-minute attendees without overloading retailers’ schedules, said ECRM chief executive officer Charles Bowlus.

Seventy retailers attended the conference, up from 50 last year, said Bowlus. He attributed the large turnout to the industry’s efforts to shake up beauty sales.

ECRM also outfitted many buyers and suppliers with wireless laptop computers. The computers were equipped with ECRM’s homegrown Efficient Program Planning Application software, which helps automate post-meeting follow-up: Attendees could type or handwrite notes into the personal computers and transmit information to headquarters.

The high tech buying process matched the product innovation unleashed at the show, such as new multicultural beauty lines, sophisticated foundations and items once found only in upscale venues.

Bringing class to mass remains a mantra in the business. However, aside from some of the more progressive players, most retailers in the mass channel have done little to spotlight their masstige offering or to make shopping their stores more pleasant. That is changing as a handful of chains, such as CVS and Brooks Pharmacy, implement new fixturing and graphics to impart a more upscale ambience. Walgreens and Harmon also continue to tweak the beauty look to reflect a new breed of merchandise once only found in tony doors.

Even in the wake of NACDS Marketplace and Cosmoprof North America, vendors had plenty of new product programs and promotional plans to share.

Markwins Beauty Products aims to add muscle to its Wet ’n’ Wild brand with an increased advertising budget in 2005 of $5 million, up from this year’s allotted $3 million. Wet ’n’ Wild has also set its sights on Hollywood. In its first movie tie-in, the brand is working on a cosmetics promotion for 2005 dubbed The Perfect Cosmetics Collection for the film “The Perfect Man,” starring Hilary Duff and Heather Locklear.

Maybelline New York, which just recruited “Sex and the City” star Kristin Davis as its new celebrity spokeswoman, has an aggressive lineup of new products slated for the first half of 2005. The beauty brand took the wraps off its new anti-age foundation called Instant Age Rewind, a silk extract and caffeine-infused formula that promises to make wearers look 10 years younger. The brand is revamping its blush offering, creating blush duos and trading in its cobalt blue packaging for a more upscale-looking silver case.

The ECRM show also attracted several newcomers this year, all hoping to make inroads into the mass cosmetics industry.

Air Stocking, the Japanese leg spray, was on hand to introduce a smaller version to mass retailers and chain drugstores. After a successful debut in Japan in early 2003, the $28 spray-on hosiery launched in the U.S., rolling out to high-end department stores in March 2004. As it did in Japan, the company has outlined a three-stage launch strategy for the U.S. market. The first stage rolls out to department stores, the second includes midtier retailers such as Kohl’s and J.C. Penney and the third hits the mass channel.

The $14.99 mass version that nets 10 to 12 applications, called Flawless Leggs, will hit CVS stores in August. The drugstore chain will have an exclusive window on the product until June 2005. The company anticipates mass retailers will do as many department stores have done and merchandise Flawless Leggs in both their hosiery and beauty departments, said Tracy Holland, vice president of sales and marketing, Belline USA, the distributor of the Air Stocking in the USA and Mexico. Flawless Leggs will compete against Sally Hansen’s already established Airbrush Legs.

Del Laboratories’ Sally Hansen brand continues to expand its Airbrush franchise, which currently includes Fast & Flawless Airbrush Makeup and Airbrush Legs. New entries for 2005 will include Airbrush Sun, self-tanning sprays for the face and body. Airbrush Sun will allow women to apply self-tanner without having to rub it in, explained Harvey Alstodt, executive vice president of sales for Del Labs. Tina Bornstein and Tony Gill, the founders of Tony & Tina, the edgy, New Age cosmetics brand sold in prestige and specialty retailers, linked up with Wella executives to present their concept for a color cosmetics collection for the mass channel. According to retailers, the line, reportedly called Love Color, is only in the conceptual stages. Should the line come to fruition, price points will hover in the $6-$7 range.

Intercos, a cosmetics manufacturer based in Italy, seeks to inject a shot of high fashion into the category with a new color cosmetics collection featuring the Elite name of modeling fame. Achim Ruehlemann, executive director of sales, showed the sleek-looking line, which managed to draw the attention from numerous retailers at the show. Ruehlemann is shopping the 125-stockkeeping-unit line to large retail chains.

After taking a hiatus from the market, the children’s cosmetics brand Tinkerbell is preparing for a comeback. Isaac Gindi of Icebox Inc. plans to give Tinkerbell a makeover, adding a slew of bells and whistles to the line such as glitter, and send it back into the market by spring 2005.

Existing cosmetics lines will get some retooling as well. With “crosscultural” as the new buzzword in beauty, many suppliers talked of the need to make their brands more inclusive.

Retailers and manufacturers have long talked about reaching multicultural consumers. And, while beauty lines for women of varying complexions have been available, most chains have only scratched the surface in presenting these products. Thanks to consumer information produced by frequent-shopper programs and other avenues, merchants are on the brink of drilling down to store level. “Retailers finally have a better handle on customers in each store,” said Marc Orlinsky, vice president of sales of Prestige Cosmetics. “And, as a supplier we are working more with chains to determine what to put in different stores.”

Prestige Cosmetics is proving its commitment to consumers of all ethnicities by repositioning its entire line as a multi-cultural brand. To that end, Prestige has created a new foundation collection. The formula was created to truly match each user’s skin tones and to avoid producing an ashy look on dark skin tones. Since different women prefer varying formulations, the collection includes cream to powder, wet to dry, loose and pressed power, and a liquid formula for a total of 40 sku’s priced at $6.95. Prestige will introduce the revamped brand with a dramatic new fixture, which will expand the company’s square footage anywhere from one to two feet. To educate shoppers on the new line, Prestige plans in-store sampling and demonstrations.

The strategy certainly has worked for Milani cosmetics. After repositioning itself as a crosscultural cosmetics line several years ago, the brand has gained in-line space at major retail accounts, such as Walgreens, CVS and Target.

The line is performing so well, according to Robert Wallner, vice president of sales, that it will receive more real estate in many planograms for 2005. The company is adding gift sets for holiday and has expanded the offer to 29 categories. One major drugstore chain reported a sales increase of 30 percent during a four-week period.

Another line targeted at women of all ethnic backgrounds is Uptown Visions from Cosmetic 2K. Company founder Stanley Acker, who also created Wet ’n’ Wild and Black Radiance, attended the meeting to promote Uptown Visions as well as a budget line called Hugs & Kisses. According to Acker, Uptown Visions is expanding its distribution in drugstores, while Hugs & Kisses is getting attention from alternative outlets such as convenience stores.

His former brands, now owned by Markwins Beauty Products, are also flourishing. According to Shawn Haynes, vice president sales and marketing, Wet ’n’ Wild sales are exploding. And, new packaging for Black Radiance is helping restore the luster to that line, which is aimed at African-American women. The next step is to revamp Tropez to focus on its Latin positioning.

While many vendors are cautious not to emphasize the word “teen,” several are making sure they’ve got the young, hip demographic covered.

After delighting the younger set with its American Idol fragrance, Beauty Innovations is building a franchise with the introduction of a color cosmetics collection. Although products within the collection are not finalized, they could include lipstick sets with bold packaging featuring images of contestants from the TV show.

The quintessential teen brand Caboodles is also undergoing a revival and returning to its roots as a resource for innovation. In addition to reinstating advertising, the company has a roster chock full of new items including metallic tattoos, body jewelry and a Kaleidoscope lip palette. To promote sun safety to young girls, the brand has also created an Active Girl promotional pre-pack, full of fun, SPF-infused products, such as a lip gloss charm bracelet and dry oil bronzers.

With extreme value stores still growing at a healthy clip, Jean Philippe introduced a new Aziza line for younger consumers. “Many women still know the Aziza name,” said Wayne Hamerling, executive vice president. “But we wanted to introduce it to 10- to 25-year-olds.” The result is Aziza Rocks, hipper sister to Aziza, also sold only to dollar stores.

Nail care remains a category retailers are tweaking to offset declining artificial nail sales, with many category managers looking to implements and nail treatments for growth. Paris Presents continues to get more shelf space with its whimsical Ms. Manicure collection and expanding Ms. franchise across a series of product categories. Calico has found a niche by. promoting nail care health with its antifungal cosmetics removers. Myra Solomon of SMS Labs showed a clever Remover Pencil perfect for cleaning up messy manicure applications, with a padded cuticle pusher. Jessica, a name made famous by a salon in Beverly Hills, continues to gain retail space for treatment and for color. Reacting to market trends, the company showed natural gels and tints that can be applied to natural nails. The company also introduced Bend Don’t Break, a new nail strengthener that improves flexibility.

In brushes, CVS will add an elegant collection under its exclusive Lumene brand retailing for up to $15. The brushes, which will be merchandised alongside Lumene cosmetics, will launch this fall.

America’s obsession with order has been a boost to Caboodles, especially for a collection called Crystal Clear, a line of cosmetics organizers. “There are people passionate about organization,” said Ernie Lippmann, vice president of sales.