Elegance With Edge at Carolina Herrera

WWD went behind the scenes at the fall show. 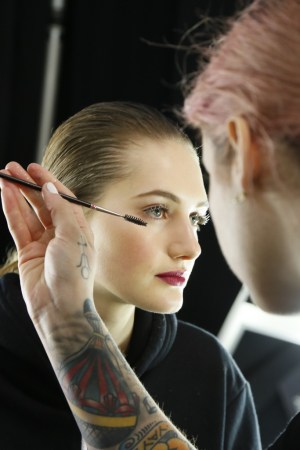 The beauty look at Carolina Herrera this season was elegant with an edge.

Diane Kendal, working with MAC Cosmetics at the show, made eyes with a dewy feel the centerpiece of the look. In advance, Kendal prepared false lashes by applying silicone and silver glitter to them, making the tips of the eyelashes look as if they had water droplets on them. After applying the false eyelashes, Kendal used black eyeliner at the base of the lashes. After applying foundation and blush on the apples of the cheeks and highlighter on the cheeks and side of the nose, Kendal finished with MAC’s Oh Lady lipstick, a fuchsia hue.

Orlando Pita, working with TRESemme at the show, fashioned a slicked-back ponytail. He applied TRESemme serum all over the hair and pulled it back into a ponytail, securing it with an elastic band. Next, he ran his fingers through the hair at the crown, messing it up a bit before spraying it with water and TRESemme hair spray. He then ran a toothbrush along the sides and crown for a defined, graphic element. After flat-ironing the ponytail, he wrapped it with several revolutions of silver cord to hide the elastic band.

Michelle Saunders for Essie created two nail looks, based on the model’s outfits. All models got Essie Ridge Filling Base Coat. Some models then got Forever Yummy, a rich red, while others were layered with two Essie shades, Imported Bubbly, a sheer metallic, and Allure, an elegant white shade. “Allure is Carolina’s favorite Essie color, so we always try to work it in somehow,” said Saunders.