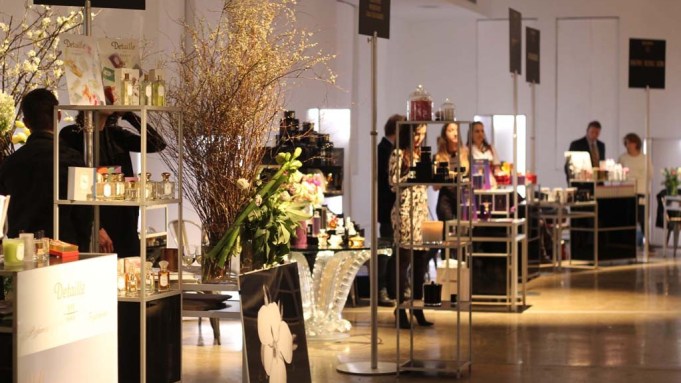 “The idea is that alchemy, which relates to the elements, is based on these seven metals and laymen think it’s about turning these metals into gold, which is not what alchemy is about,” said Frederick Bouchardy, one of Elements’ founders and creator of indie fragrance brand Joya Studio. “Alchemy is about how different scientists created a secret society and a secret language, so it’s about communication, and that was the idea here, that the brands come together to make the trade show. They all lift each other up. You can see the evolution and the differences among them.”

This year it seemed personal passions were drivers behind many of the brands in attendance, including metal-infused nail-polish brand Mine Luxury Nail Lacquer.

“We use metals like pewter, fine silver and graphite, without fillers, [housed] in Austrian hand-cut crystal bottles,” said the brand’s creative director, Veleta Vancza, who is also a blacksmith and jewelry maker by trade. The brand offered attendees on-site manicures and with a multitude of glimmering hues, including a $500 24-karat gold nail polish.

On the upper level, where all the fine fragrances were housed, was Australia-based florist Saskia Havekes, who showed off her botanical-exploring Grandiflora line, born from her experience creating floral installations for 25 years. “I have my own shop in Potts Point and we work constantly with the fragrance and shape of flowers because that’s our medium,” said Havekes, who was seeking increased distribution for her two magnolia-interpreting scents, both available only online via Luckyscent in the U.S. “We’d love to expand.”

Havekes brand certainly appealed to Karl Bradl, cofounder of West Village fragrance store  Aedes de Venustas, who was on the hunt for “new and exciting” fragrances.

“[Grandiflora’s] whole aesthetic resembles my essence and what I like,” said Bradl, adding that he plans to expand his boutique into other cities. “I prefer flowers and that’s what I work with. Also, the story behind it, the perfumers they chose [Michel Roudnitska and Sandrine Videault], that was for me something that spoke to me.”

“I make skin care for lazy men,” said Simon, who has specialized in essential and vegetable oils for more than two decades. “I made it for my face and also for my bald head, because in the summer it gets cracked and red.” His product, which contains ingredients like tea tree oil and lavender, was noticed by at least one retailer on the floor. “I liked the Rayman product,” said Anthony Qaiyum of Merz Apothecary in Chicago, who is opening an adjoining store dedicated to men’s shaving. “I feel like the shaving revolution of double-edged shaving and wet shaving with brushes has brought men back into fragrance in a big way.”

Another brand in attendance was Zurich-based Calming Park, which was founded by music designer and DJ Olivier Rohrbach. Rohrbach said the company began as a music project, but soon developed into candles for a sensory relaxation experience.

“The brand started with music with a compilation in 2000 and in 2007 I wanted a candle to accompany it,” said Rohrbach, who creates musical tracks for hotels like the Four Seasons Maldives and Mauritius and also creates candles for artists and fashion designers. “I do very specific projects but the music is most important.”

For Robert Pettersen, director of New York and San Francisco-based apothecary Fellow Barber, Calming Park was a stand out.

“I love being surprised by brands I haven’t seen before, particularly the more independent ones, whether they are based overseas or here in the U.S.,” said Pettersen, who also named Joya, stylishly packaged natural home-care brand Common Good and vintage-inspired aromatherapy line Portland General Store as show favorites. “For us, it’s a priority to stock a mix of classic and contemporary brands while not buying newness for newness’ sake.”

Pettersen then echoed the idea that the men’s market is currently in growth mode. “The upside for us and other buyers in the men’s category is that there is a definite upswing in fragrance sales as well as mid- to high-end hair, shave and skin care products,” he said.

Another theme of the day was the idea of elevating the everyday personal beauty experience into something more decadent. Brands like James Read, a high-end self-tanning company, whimsical color cosmetics brand Rouge Bunny Rouge from Moscow and Indie Lee, a skin-care brand started by a cancer survivor who discovered that her disease may have been caused by environmental toxins, all offered new takes on existing beauty categories based on uniquely positioned brand stories.

“Personal passion could be seen as an overarching theme this February as many of the brand creators are already well established in other creative fields, like floral design, makeup design, music editing and DJing, cooking, working as a blacksmith and life coaching, and their beauty lines are an expression and extension of their creativity,” said Ulrich Lang, owner of Ulrich Lang Fragrances and an Elements founder. “In the fragrance category I noticed several creators using their personal history and vision, too: Vagabond Prince, Isabelle Ariana Parfums, Arts and Scents, Union Fragrances and Sulékó come to mind.”

When it came to the physical design of this year’s Elements edition, the last to be held at the current space, the look was meant to reflect the show’s growing number of categories.

“As we expand into these new categories, it just makes the show more dynamic to a larger group of buyers,” said Jeff Lawson, owner of Jeff Lawson Associates Inc., and a founder of Elements. “It’s more interesting for them to come here and buy from four or five different categories as opposed to just one.”

Lawson said that the next New York Elements Showcase will be held in a larger space, which will allow for more brands to be featured on the same floor. “This is the beginning story of the design,” he said. “It will continue to get a little more dramatic and a little darker.”