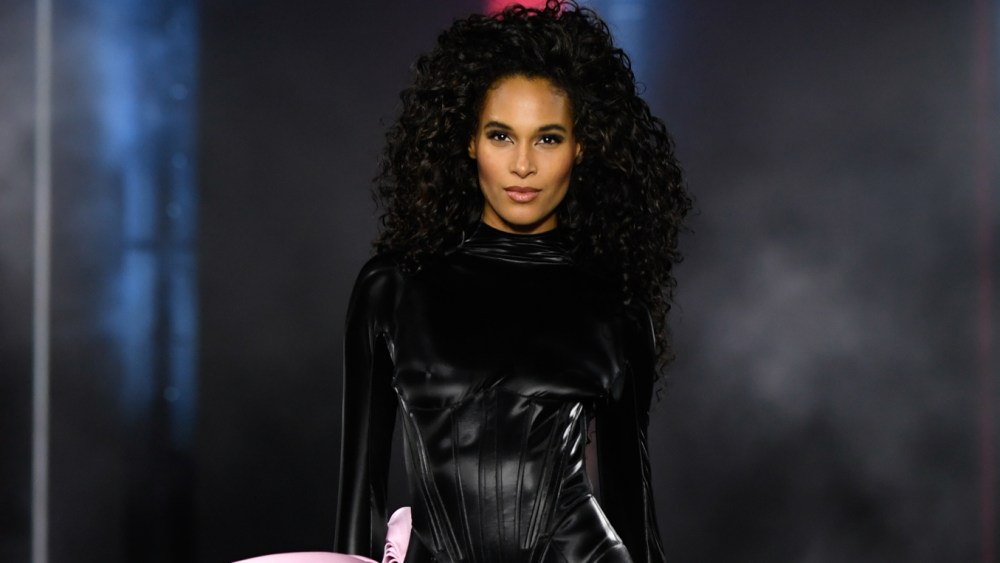 PARIS — Guests and the general public were excited by Andie MacDowell’s strut, confidence and fun approach as she modeled the upbeat L’Oréal Paris show here on Sunday.

“This défilé is very important to me because it’s a perfect summary of what L’Oréal Paris is,” said Délphine Viguier-Hovasse, global brand president of L’Oréal Paris, before the show. According to the executive, in addition to “showcasing beautiful hair and makeup,” the format embodies what the label stands for, which is “a luxury, accessible brand.”

“To me a [runway show] is the most exclusive event you can have on fashion and at the same time, the fact that we do it in public, it really makes this luxury accessible,” Viguier-Hovasse said.

The third reason she listed was the annual theme, which plays on the brand’s well known tag line “Because You’re Worth It” and is linked to the company’s international program “Stand Up Against Street Harassment” launched in 2020.

Before hitting the catwalk in a feather-embellished short dress, Longoria also praised this year’s motto. “I’m not a model, and there’s a lot of non-models in this show. It’s all the global ambassadors who represent so much more than fashion. We represent our life’s work of philanthropy and activism and social justice. So to take the runway and strut our stuff is like to show our confidence and our attitude in being secure in who we are. Plus to have such an iconic feminist brand take over this historically male space, that’s really bold,” said the actress, who in the past few days was seen at the fashion shows of Elie Saab and longtime friend Victoria Beckham.

Not that L’Oréal is new to picking impactful venues — former events were set against city landmarks such as the Seine river and the Eiffel Tower — but this year’s partnership with École Militaire also came with a philanthropic commitment that will support cultural and renovation projects at the historic site.

For French singer-songwriter Yseult, who joined the L’Oréal Paris team last year, the event was also about championing diversity. “As a Black woman, for me it’s very important to show to all the little girls that everything is possible, so I’m very honored to be a part of this project tonight,” she said before walking in a white lace dress that made for another highlight of the soirée.

“I think it’s about being authentic and true to yourself, trusting your instincts, not questioning yourself, not trying to please other people but yourself,” offered MacDowell, sharing her own interpretation of the “Walk Your Worth” tag line.

Confidence was a big part of the conversation at the event, with talents crediting different people in their lives as pivotal in their journeys.

“I think my children have helped me a lot because I really worked hard on helping them to have self-esteem. And so if I question myself, they’re usually the ones that remind me what I taught them….Everything that I tried and wanted to give to them to help them have self-esteem and self-worth and dignity, they reflect back to me,” said MacDowell, who is working on a new Hallmark series dubbed “The Way Home” and her upcoming movie “My Happy Ending.”

“Mostly my mother and my sisters” influenced Longoria. “I grew up with a lot of women in my family — strong, independent, smart women, so I’ve always had them as the example to follow. I’ve never really had to look far for an example.”

Ditto for Kebede, who also pointed to her mother, describing her as “a very strong woman” always fighting for fairness, while Soo Joo Park mentioned fellow L’Oréal ambassadors, from Jane Fonda and Kate Winslet to Longoria, who “I’ve known for years, I adore her and I think she’s such a confident woman that shares a lot of her and is not afraid to speak up.”

Conversely, for Yseult, confidence isn’t necessarily inspired by an external source. “I find it in my work because I am an independent artist, so I need to believe in myself first If I want to create a project or work with people or if I want to share my vision,” said the singer, who was recently in Los Angeles “working a lot on my mental health and my body, which is very important before sharing a new project.” The artist, who just released a new song and is working on a new album, shared that the advice she would pass along to other women “would be to be proud to be vulnerable and ambitious.”

Kebede admitted it’s no easy task to give tips on the matter as there is not a single formula to confidence. “And honestly, sometimes it’s also deceiving because you look at these people that are on stage, walking the walk, but it doesn’t mean we’re comfortable….There’s a lot going on behind and everyone is like putting up the strong face and doing it but every day we all struggle,” the model said.

Still, she thinks that connecting to one’s own passion can be a key step in the process. “So looking outside is probably not the right place; I think just look inside and see what gives you a kind of nourishment, whatever it is that you want to do….A sort of place to inhabit, so you get out of this insecure bubble,” said Kebede, who most recently started the “Liyabrairie” Instagram account dedicated to sharing her passion for books, interviews with authors and favorite bookshop around the world.

“I think I’m most confident when I’m educated about something, whether it’s politics or my activism, my philanthropy, I really like to dig deep into a subject and get to know and listen to experts on it,” Longoria said. “That’s where my confidence gains. It’s like I’ve done the homework, I’ve read up on these issues, I understand it and now I can speak about it. And so for women, if it’s [about] being confident in yourself, study yourself. What makes me happy? What brings me joy? What relationships don’t serve me? That’s doing the homework for yourself. So for me, beauty really comes from confidence and confidence comes from being educated.”

A similar, informative approach defines the “Stand Up Against Street Harassment” program launched to help women walk safely on every street and aiming to educate the public on how to intervene against street harassment. The initiative is present in 41 countries worldwide in partnership with the non-governmental organization Right to Be. To date, 940,000 people have been trained around the world, with L’Oréal Paris committed to train 1.5 million individuals by the end of 2022.

For the first time, L’Oréal Paris has also introduced a product element to support the cause as it’s launching “A Lipstick Is Not a Yes,” a limited-edition lipstick in a red shade dubbed “Le Rouge Liberté.”

“I believe that beauty is a power and you have to use this power for good reason….A lipstick is to say I’m here, I’m present but it’s not necessarily an invitation,” said Viguier-Hovasse, adding that all proceeds from the sale will support the program and enable local charity partners to train more people.

“I’ve been with L’Oréal for almost 20 years and [saw] them lean further into feminism, to lean more into protecting women all over the world, using the brand to bring up women issues….The brand has such access and connection to women and to use that access for the greater good and progress of women is probably the thing I’m most proud of,” said Longoria, who touched down Paris from Spain, where she is shooting her new Apple TV+ bilingual comedy “Land of Women” along with Carmen Maura.