The color-cosmetics collection, created by Ben Gorham and Isamaya Ffrench, is due out on Oct. 1.

Since its birth 15 years ago, Byredo was built on the notion of communicating ideas and storytelling, Gorham explained, adding for much of that time fragrance was the focus. 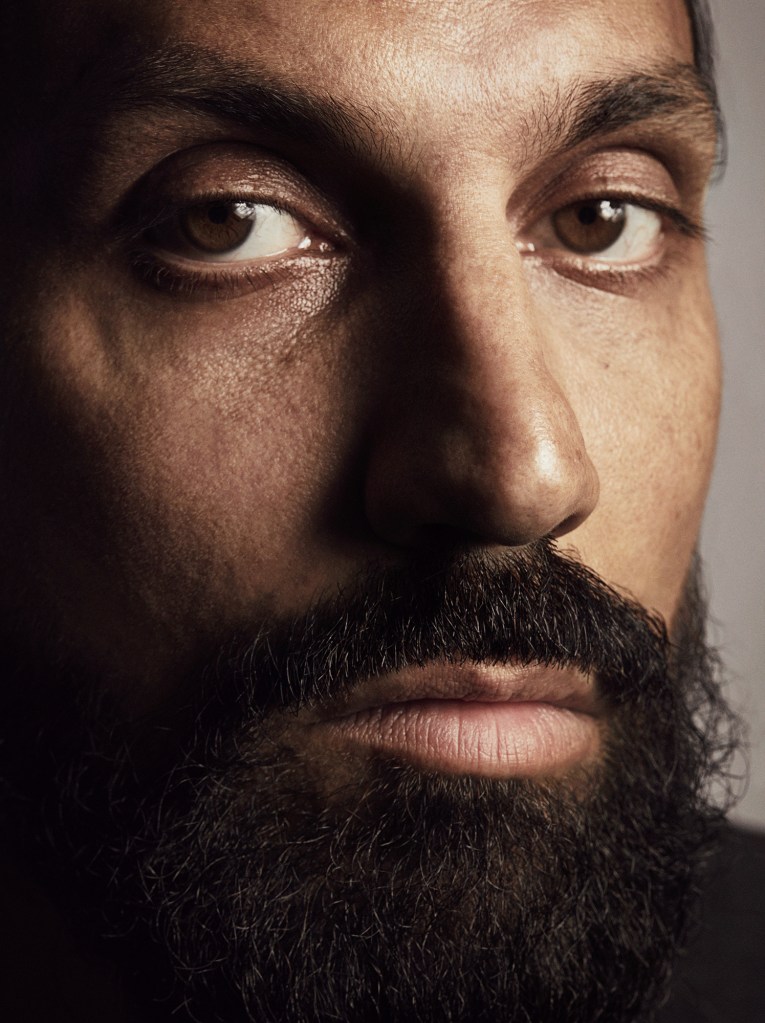 “Quite early I started to realize that there could be different mediums for communicating these stories and these ideas I had,” he said. “Color seemed like a very visual, visceral manifestation of the brand, and after working in this very invisible medium for many years, we had very strong ideas about what that could be.”

Still, five years ago when he began imagining a color component for Byredo, Gorham found it a difficult category since he’d never worn makeup himself.

“It wasn’t until I saw Isamaya’s work probably two and a half, three years ago [on Instagram] that I started to feel like somebody existed with a shared sensibility that could really bring this to life for me,” said Gorham.

Coincidently, they have many common friends — one of whom eventually introduced them.

Ffrench wasn’t immediately won over by Gorham’s proposition to work on Byredo makeup, but as conversations progressed she understood he wanted to do something different, and that inspired her. 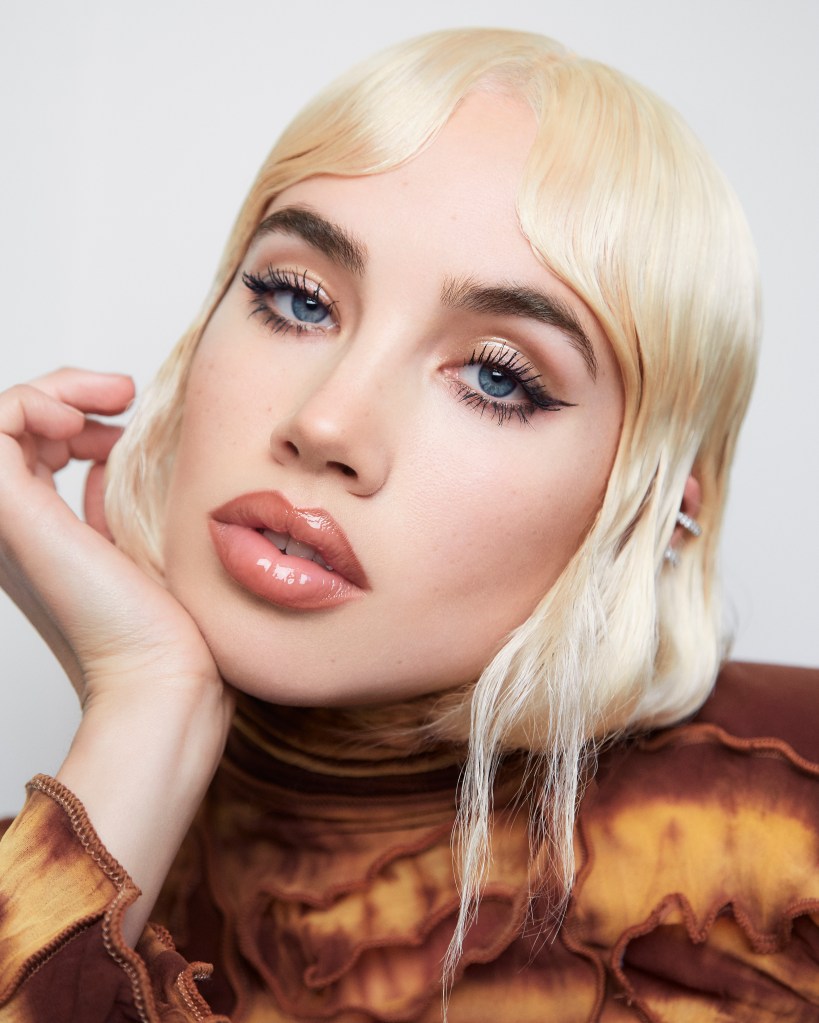 Ffrench “brought me along and kind of held my hand throughout this process,” explained Gorham. “We agreed that how color makes you feel would be the foundation for this project.”

They opted to develop products “that would allow people to play with their identity and decorate their face,” said Ffrench.

She and Gorham became good friends while often meeting (pre-coronavirus) for work in Stockholm, London, Paris or other cities between fashion shows. Gorham even invited Ffrench on one of his nature trips.

Their collaborative effort started with colors that resonated.

“Ben’s got a great eye for image, visuals, color,” said Ffrench. “He works in a very artistic way.”

She began a color-curation process, finding images from photographs, such as snaps by Harley Weir; packaging and film. Ffrench would then take stills of such images and extract a pixel from the area of color she liked.

“Over time I created this color library of squares,” she said. Picking hues Ffrench and Gorham related to, such as blues, purple and orange, was next.

“It really came from an organic place of what we found beautiful,” she said. They then decided where each worked in the collection.

The duo drew up an extensive blacklist of unclean ingredients and had suppliers meet their criteria.

The Colour Sticks, in 16 shades, are universal and easily blendable. The metallic blue might be applied on the eyelid of one person or lips of another, for instance. 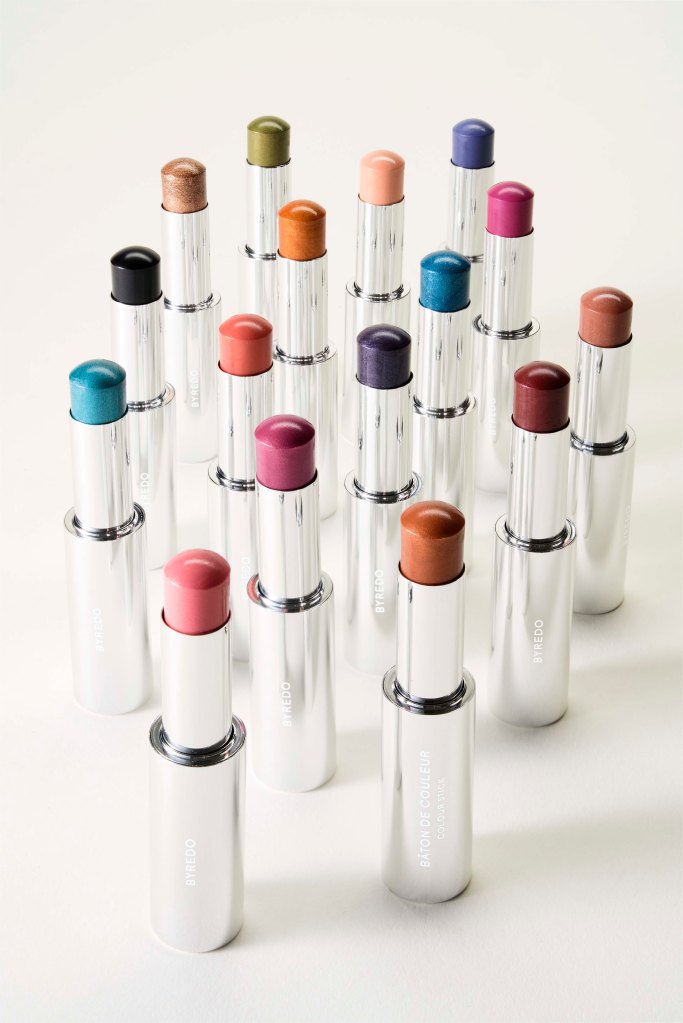 “I wanted to have a product that wasn’t really defined by your skin tone and how you should wear it,” said Ffrench.

Color combinations are very important, and a fine focus was placed on textures, too. The lipsticks, for example, are in a satin and in a matte. 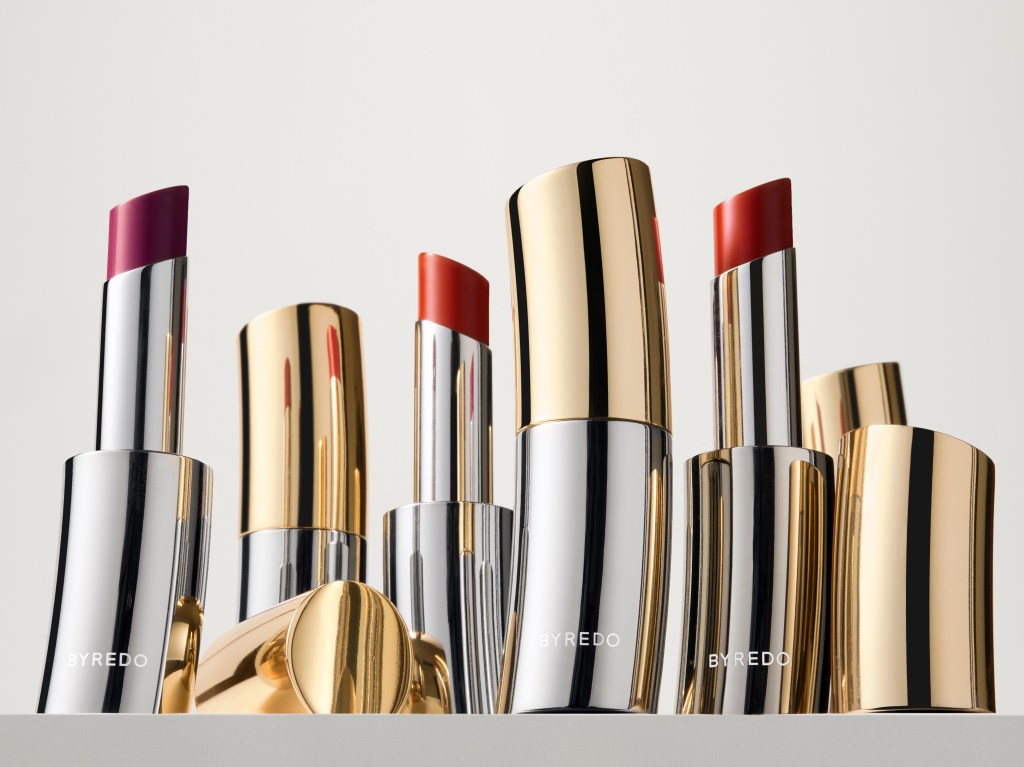 While highly performant, the makeup is also playful.

“I think the cosmetics industry can take itself very seriously,” said Ffrench, who created a palette called Corporate Colours, which has “like the browns and the taupes — the boring colors [that] everybody actually does want to wear.”

The Sciomancer palette has Black music artist Yves Tumor as its muse.

“It’s quite hard to find a muse these days because there are just so many people doing the same thing,” said Ffrench. “[Yves is] really expressive. His fashion sense is amazing. His music is amazing. He’s a great performer [and] loves wearing makeup — so I created that palette with somebody like him in mind.

“We’re choosing unconventional characters as the muses for some of our collections, and it feels a lot more authentic than being just like, ‘here’s another pretty model,’” she said.

Byredo Makeup was developed for full-face use. And while nothing’s mandated, a taupe Colour Stick could be used for contouring, while other sticks can work as blushes, for example.

Ffrench said she built makeup artistry tricks into the line, as well, and added that ease and versatility were key.

Take the mascara’s wand created with a fine head so it can reach close to the lash line for a true volumizing effect.

“I really wanted to make Byredo color a little bit different to anything that currently exists in a commercial way,” she said, explaining the collection is about the magic of makeup and transformation.

“We are saying ‘this is what we like, we hope you like it, too, and it’s really there for you to find a new way to use makeup,’” said Ffrench.

“We are not following anyone else,” she continued. ”We’re being really puritanical about creating stuff that makes sense for us.

“I’m not that interested in trends, because by the time you become invested in a trend, it’s over,” said Ffrench. “What people want now is authenticity. When people buy things it’s because it says something about themselves, and it’s something they want to relate to, buy into or experience.”

As Ffrench, who deems Byredo Makeup to be an “artistic project,” began focusing on the colors’ functional applications, Gorham watched and learned, and threw himself into designing the objects, which he discussed with her.

Gorham believed there has been a homogeneous approach to cosmetics packaging.

“We devised this idea of curated objects,” he said. Every product function was designed and tooled individually.

“I referenced very timeless objects, both artifacts and relics, and shapes found in nature with this ambition of creating a collection of objects that truly felt timeless yet relevant,” said Gorham.

Tactility of the objects — materials, finishes and weights — were of upmost importance.

For the eye shadow compact, he merged the ideas of an oyster and liquid gold.

“Other shapes referenced horn shapes found in animals and then also these very historic type of almost Egyptian artifacts that I felt when you see them they have a very contemporary quality. I described that at one point as almost being alien — not knowing if this was created 2,000 years ago or in the future,” said Gorham. “There’s something about that emotion that I truly tried to capture in the design of those objects.”

To tease the launch, Jesse Kanda created computer-generated imagery of a greenish-red alien-person.

“It was important that we lead with an image that wasn’t one type of person,” said Gorham. “We wanted to use color in the broad sense to empower and inspire people to express themselves and ideas.”

“I am interested in making images that aren’t just photographic,” continued Ffrench. “There’s not a lot of digital commercial makeup imagery. So it was really important that we explore other mediums…to express the idea of makeup in a new form in a commercial way.”

The Colour Stick, lipstick in 15 shades, mascara and liquid eyeliner (both in black) and lip balm, which range in price from 29 euros to 39 euros, will launch Oct. 1 in more than 30 doors globally. These include some freestanding Byredo stores, on Byredo.com and with retail partners such as Saks Fifth Avenue in the U.S., Selfridges in the U.K., Galeries Lafayette and Le Bon Marché in France, and NK in Stockholm.

An eye shadow palette with five colors is due out in November, and an 18-color palette is slated for February 2021. 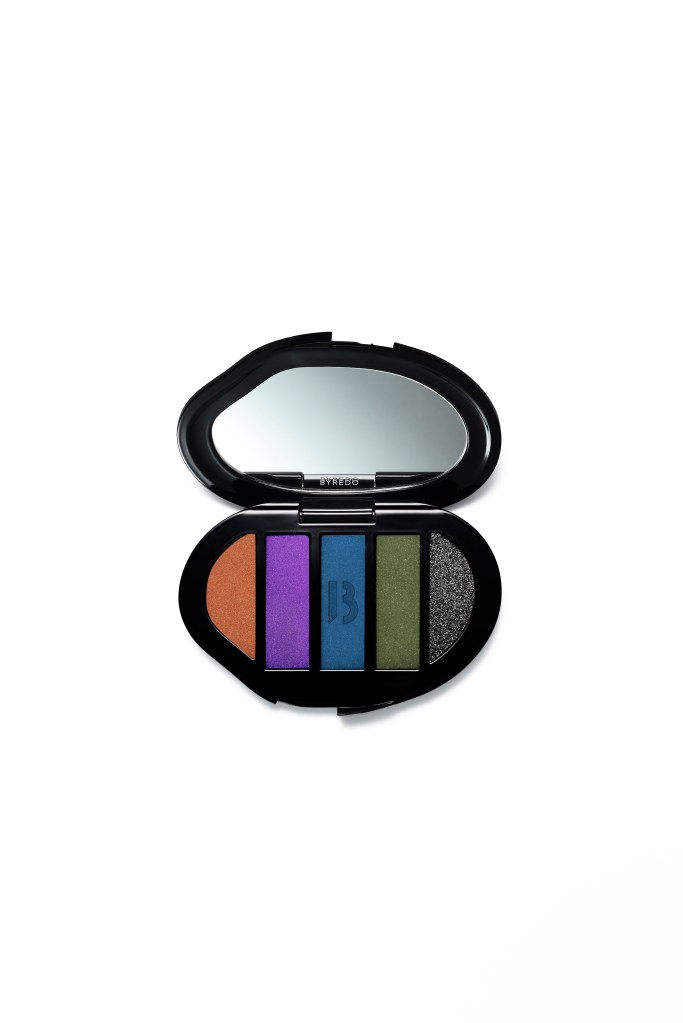 The slowdown of makeup consumption resulting from the COVID-19 pandemic hasn’t affected Byredo Makeup’s launch or expectations for it.

The brand’s executives would not discuss sales forecasts, but industry sources estimate the line will generate 10 million euros in total sales during its first 12 months.

“I believe we will come out of these times different in some way, but I don’t believe that the fundamental ways of how people dress, communicate or carry themselves will change,” continued Gorham. “The question is when and how will things normalize.

“I don’t know, but I was keen on moving forward with this project because what I have felt over the last few months is that people need to be inspired more than ever, [they] need to express themselves more than ever. And I believe that this project allows that.”

A New Digital Modeling Agency Is Trying to Redefine Beauty