EXCLUSIVE: Carolina Herrera Thinks Makeup Can Be Jewelry, Too

PARIS — Bringing fashion and beauty closer than ever, Carolina Herrera is introducing its first range of lipsticks and compacts in packaging so sculptural and precious that it can double as jewelry.

“You’ll always find the Herrera woman on a cloudy day standing out in a bright pink coat, when everyone else is in black,” Gordon told WWD. “I wanted to translate that joy and exuberance of our collections into makeup. The idea that a dress or an outfit can lift your mood and bring you happiness is a simple yet powerful concept, and I feel that makeup should be the same. 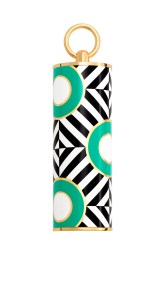 “Because fashion was the starting point, we started to imagine the line as a collection of ready-to-wear pieces rather than traditional keep-it-on-your-vanity or hidden-inside-your-purse makeup,” he explained. “Mrs. Herrera is a big fan of vintage jewelry and has the most amazing collection, so that in part sparked the idea of mimicking precious objects for the design. We wanted each product to double up as something eye-catching that you could wear and have a conversation piece at the same time.”

The color cosmetics project was a few years in the making and a brain meld between Gordon and Herrera’s daughter, Carolina A. Herrera, who is known inside the house as Carolina A.

“When Carolina A. and I first started thinking about the makeup collection, we thought a lot about how and where one applies makeup,” said Gordon. “In the very beginning, we saw it as a very intimate moment, at home in front of a vanity. But we quickly realized that the environment is sometimes even more fabulous for the Herrera client. 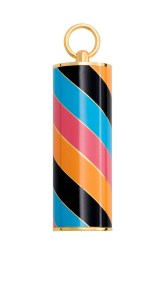 “One evening, Carolina A. and I were having dinner with Mrs. Herrera,” he continued. “We had just ordered when suddenly, she takes out her lipstick and grabs one of the silver knives to use as a mirror — talk about being elegantly resourceful. There was something so impossibly chic, unexpected and almost performative about that moment. Carolina A. and I just looked at each other and had this ‘a-ha’ moment. Our makeup is meant to be shown; the wearer could and should be proud to flaunt it at all times. That moment was very much the genesis of this concept. We started sketching ideas on a napkin before the coffee had even arrived.”

Makeup that is wearable and customizable packaging-wise was at the core from the outset.

“Carolina A. and I both felt that it was really important to blur the line between makeup and ready-to-wear by creating pieces that could almost be mistaken for jewelry,” said Gordon, who hadn’t worked on makeup before. “We chose to use designs that reflect the house’s fashion aesthetic with a color palette of bold and vibrant hues to keep that link as strong as possible. We looked to the brand’s design codes and most iconic fashion moments for inspiration, such as our signature polka dots and stripes. The prints all reference or revisit archive pieces — for example, the rainbow lipstick cap is inspired by a cape I created for Lena Waithe’s Met Gala outfit, and the heart pattern uses a motif featured in my first resort collection for the house. So they all have a particular significance in the Herrera vocabulary.”

The striped fabric for Waithe’s cape was similar to that of material used in a dress Herrera’s mother wore in a photo from yesteryear, which was found while mining the label’s archives. 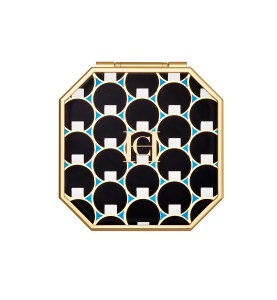 “It was a fun discovery,” she said. “What I love the most is going through the archives… the old photos, sitting down and thinking of where all these things come from.”

Since her mother is famous for her striking red lips, immortalized by Andy Warhol in portraits, lipstick was the obvious first step into beauty.

“Lipstick is the quintessential easy makeup that dresses you,” said Carolina A. Herrera, recalling also her mother’s signature red lipsticks. “I used to wear them — horribly so, because when you’re 12, putting on makeup you do a sort of clown face.”

The Carolina Herrera brand’s foray into cosmetics dovetails with momentum in its fragrance business, according to company executives.

“The evolution of Carolina Herrera fragrances has been amazing in the last four years after the launch of Good Girl,” said José Manuel Albesa, president of brands, markets and operations at Puig, owner of the Carolina Herrera brand, trumpeting that it became “a top-10 brand worldwide this year in fragrances.”

“In the beginning, the brand was very North America, Latin America, Middle East and Spain,” he continued. “Thanks to Good Girl, we reached all of Asia and European countries. So [Carolina Herrera] has a completely global presence.”

Good Girl’s male scent counterpart, Bad Boy, has reached top-10 rankings in each market where it was launched since last September. “At the same time, the 212 franchise continues growing,” said Albesa.

In addition, Carolina Herrera New York fashion has been notching “very important growth,” said Albesa. “CH is having extremely good momentum. The whole brand is growing in all markets and categories.” 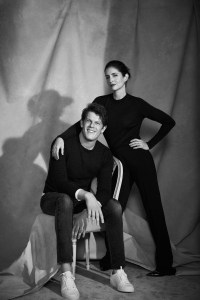 In fact, he said Carolina Herrera should cross the 1 billion euro threshold within the next two years.

The Carolina Herrera New York Makeup line includes 36 shades of lipstick in colors ranging from pinks to berries, reds, corals, browns and nudes. Textures come in sheer, satin and matte, and all formulas are paraben-free.

The compacts include embellishing powders in eight shades, a universal mattifying powder and an illuminating cream-to-powder highlighter.

“From the start of our collaboration, the main focus was to create a beauty line of modern, fresh textures and colors that will suit everyone,” said Lauren Parsons, global Carolina Herrera New York Makeup consultant.

She explained the idea was to take the guesswork out of choosing a lipstick hue. So, for instance, there are various reds with different undertones, such as orange red and blue red.

“It’s a reimagining of ‘old-school’ beauty, as it were. We wanted to capture the true essence of Carolina Herrera — feminine, vibrant and beautiful,” she said.

When it comes to the packaging, there are 10 patterned caps for the lipsticks and four different compacts, which are each refillable. The collection also includes tassels and charms. Every lipstick, shaped like a pendant, comes with a gold-colored ring that can be clipped on things, like a handbag, while the compacts have ring-holders with a beetle embellishment.

“Everything is conceived as an object of desire,” said Albesa. “There is not any single sku which is generic.”

For the compacts, a pattern goes for 10 euros, while a metal base is 32 euros and a full compact is 80 euros.

The makeup line will be launched first on Harrods’ e-commerce site on March 15, followed by Harvey Nichols Kuwait on March 25.

In the first year, Carolina Herrera New York Makeup will be in 30 doors globally.

“Then in year two, there will be the rollout with new product categories also,” said Albesa.