PARIS — Gucci is about to become even more colorful, with the launch of a lipstick line conceived by the brand’s creative director Alessandro Michele, which is due out starting this week.

“Makeup is something poetic and fleeting that you can add to your face, changing or highlighting something about yourself,” said Michele. “I find it an almost magical language, strongly linked to the other details I use for the expression of the self, such as jewelry and a hairstyle. Of all these aspects needed to emphasize or underline an aspect of ourselves, makeup is the most immediate and the oldest way, making it the most fascinating.

“Lipstick is the most beautiful object you can find inside a handbag,” he continued. “It is the most fascinating because it has always had a beautiful scent — we made Gucci lipsticks perfumed with violet. Lipstick is a playful object because it recalls crayons that children color with. Lipstick also symbolizes the world of cinema, and all the famous lips from Hollywood.”

“The aesthetic of Alessandro — the color, texture, imagery — can be easily well-reflected in beauty in a very cohesive and coherent way,” Marco Bizzarri, president and chief executive officer of Gucci, told WWD.

Michele, who oversees the Gucci brand image, was involved in each step of the lipstick’s creation. “He really loves and has a great knowledge of fragrance and beauty,” said Bizzarri.

À la Gucci, there’s nothing traditional about this color-cosmetics line. Take its rollout strategy: Rather than introducing all product segments at once, the brand is doing so in drops, with lipstick first up.

“It’s a new way of approaching the launch of this new category,” said Edgar Huber, president of Coty Luxury, Gucci’s fragrance and beauty licensee. “We want to build it over time and give full dedication to each one of the categories.”

The lipstick tube designs are not all similar, either. Some are gold-colored, with a lightly etched Art Deco motif, while others are turquoise or ivory with pink rosebuds. Each has a ridged, golden base. 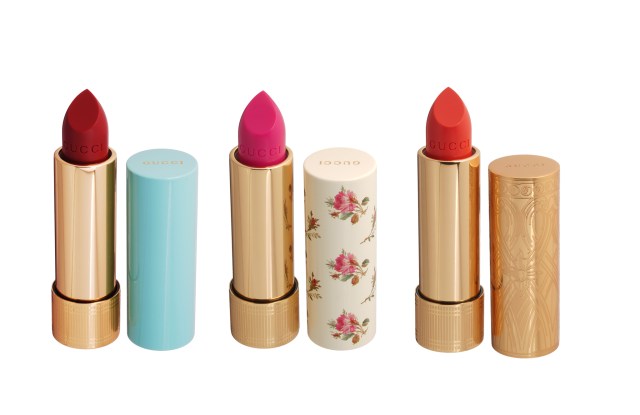 “The design is very different and disruptive,” said Huber. “It’s a mixture between a modern and [vintage inspiration].”

“I thought back to the lipsticks I saw in my life, when I was little — my mum’s lipstick…inspired by the Fifties,” explained Michele. “And I wanted to give it the most powerful meaning, that of the Hollywood divas and the mythology of cinema, which first put lips in the spotlight.”

The star product for Michele is called 25* Goldie Red, nodding to the red lipstick he saw as a child on confident women and a Hollywood character named Goldie. Twenty-five, meanwhile, is the creative director’s lucky number.

The lipstick range was designed with diversity and inclusion in mind, and the idea that makeup should exalt flaws. Its advertising campaign is still under wraps, but Huber said it will feature four talents.

“For me, whoever wants to wear lipstick can do so,” said Michele. “It’s time to free men from the idea that makeup is an interpretation and an idea of femininity. Makeup is a total expression of freedom, because putting on lipstick means you are getting closer to the amplified idea that you want to give yourself.”

Diversity has long been entwined in Gucci’s DNA, with the brand recently ratcheting up the pace of related actions. Last December, for instance, it launched a global program called Changemakers, meant to foster unity through community projects. And in February the company revealed the first of four long-term initiatives to achieve cultural diversity and awareness throughout its organization and global activities following the outcry over Gucci’s alleged “blackface” sweater.

The lipstick line will launch exclusively on gucci.com on May 4; then in New York, in Gucci’s Fifth Avenue store on May 5, the Gucci beauty store in Saks Fifth Avenue on May 6 and Gucci’s Wooster Street store on May 13. The rollout is to then continue in selective doors worldwide, including in travel retail and in key markets, such as Europe, Southeast Asia, China, the Middle East and Australia.

The launch will be backed by a major digital push. “One of the big successes of Gucci in general is really its connection with the Millennial consumer, and this connection comes through a very advanced, sophisticated and developed social-media activity — and beauty is no exception in that,” said Huber.

Gucci Beauty went live on Instagram in September, which is going to be key for the makeup introduction, with numerous first-to-market innovations. To date, the platform has notched up 286,000 followers.

The existing Gucci makeup — developed during a different creative era for the brand — is sold today in Asia, particularly in Hong Kong and Macau, and will be phased out as the new range launches.

Bizzarri said the Gucci fashion house and Coty are working in complete synergy on the new project.

It’s one that comes with great expectations. Although neither Coty nor Gucci executives would discuss sales projections, industry sources estimate the lipstick line will generate upward of $100 million in retail sales during its first 12 months on counter. That would quickly help push Gucci’s overall fragrance and beauty business past the $1 billion mark, the sources said.

Other makeup categories to drop soon for the brand will include products for eyes and face.

Gucci’s evolution has been taken place on numerous fronts.

“When we started back in 2015 with Alessandro, of course the first priority in terms of changing the aesthetic was concentrated on our ready-to-wear [and accessories business],” said Bizzarri. “Then, due to the lead times, we began to realign the fragrances with the new fashion aesthetics. I think it’s a great continuation of what we started to do from the very beginning.” 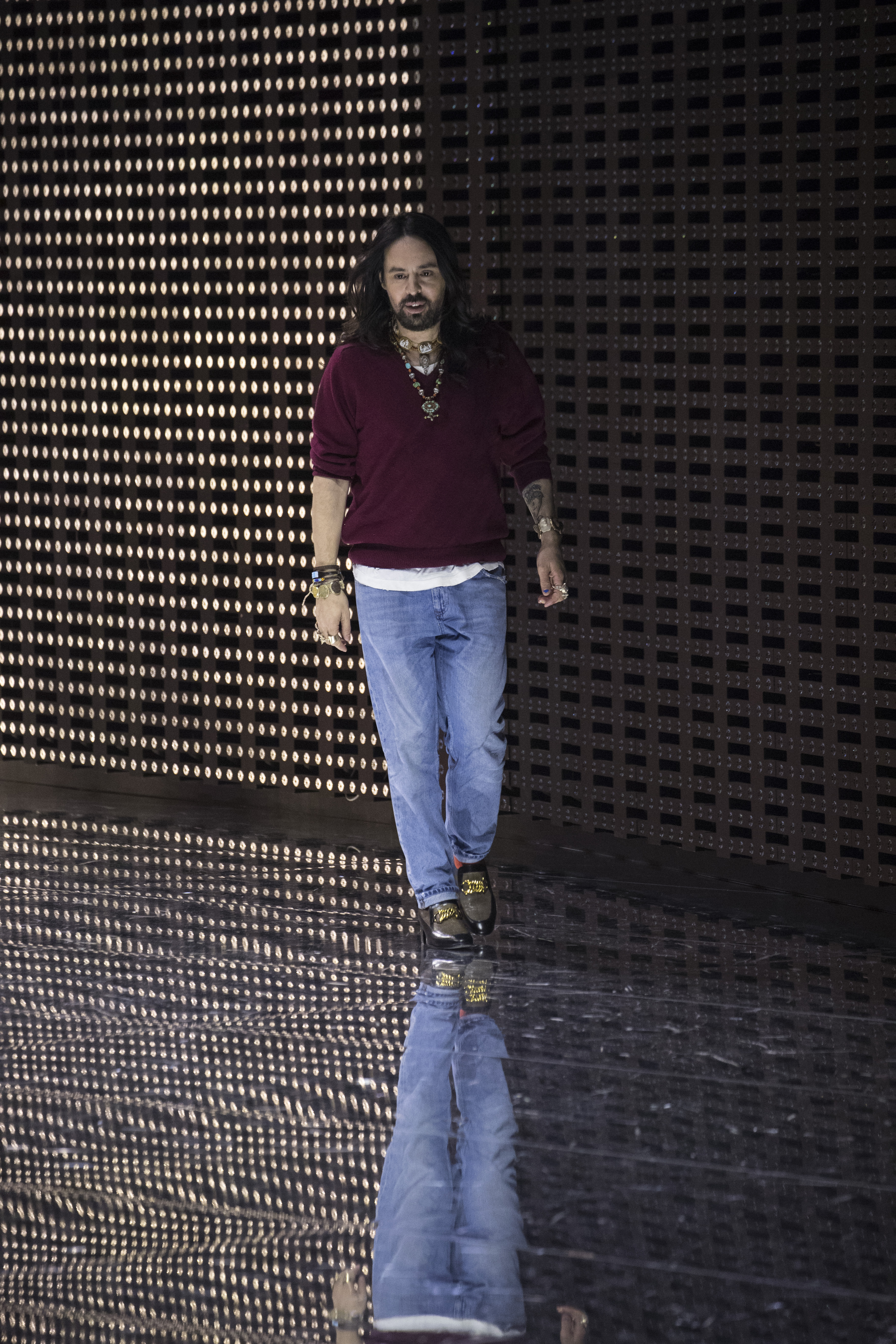 Coty took over the Gucci fragrance and beauty license from Procter & Gamble at the end of 2016, and since then worked to rebuild the perfume portfolio and clean up its distribution channels.

Bloom was the first scent introduced under Michele, and that was followed by the re-stage of Flora, the Alchemist’s Garden collection and the Guilty franchise’s relaunch. In less than two years, the Gucci fragrance brand went from ranking 17th to ninth worldwide.

“From a fragrance standpoint, we are now completely in the new aesthetic, which is the reason why now we are starting to think about [makeup],” continued Bizzarri.

Color cosmetics, and other beauty products, also are more accessible to a wider demographic than fashion, especially to younger consumers due to makeup’s relatively lower price points. Gucci lipstick, for instance, will cost $38.

Makeup allows a brand to attract new consumers more frequently than fragrance, since color cosmetics innovations tend to come out monthly, versus perfume launches generally taking place every second year. “Therefore today, if you really want to keep a brand very strong…you need to diversify all the time,” said Huber.

“We will really be interacting with a lot of people through the beauty line,” said Bizzarri.

“I’m quite confident that this will become one of the next big drivers of growth for Gucci going forward,” said Bizzarri, of the beauty business.

Another upcoming development for Gucci beauty is a yet-to-be-named, in-house makeup artist. While Michele will continue steering the inspiration and creative direction for Gucci makeup, that person will focus on the technical aspects and application of color cosmetics.