The brand aims to train one million people in bystander intervention before the end of 2021.

A rendering of a Stand Up poster.

PARIS — L’Oréal Paris on March 8 will officially launch its international Stand Up Against Street Harassment program and plans to train one million women and men in bystander intervention before the end of 2021.

Delphine Viguier-Hovasse, global brand president of L’Oréal Paris, told WWD that the brand’s purpose has always been to empower women.

A few years ago, L’Oréal Paris executives asked themselves what prevents women from reaching their goals today. To find out, they asked the question.

“Sexual harassment came number one, before equal pay, before the famous glass ceiling in the [workplace], even before education,” said Viguier-Hovasse. “That was true in all the countries where we conducted the research.”

L’Oréal Paris launched a survey on sexual harassment in public spaces in partnership with market researcher Ipsos. Altogether, 15,500 people of all ages were questioned in Canada, France, India, Italy, Mexico, Spain, the U.K. and U.S. about their experiences of harassment — both as victims and as witnesses.

Seventy-eight percent of the women polled said they have experienced sexual harassment in public places. Of those people, only 25 percent said someone helped them.

Seventy-nine percent of victims said their situation improved when a witness stepped in. However, 86 percent of people do not know how to respond when witnessing street harassment, the study found.

The Stand Up program aims to discourage harassers, support victims and promote safe bystander intervention. For it,  L’Oréal Paris partnered with an NGO specializing in fighting harassment, called Hollaback!

“They put together a very good, simple method, called the 5Ds,” said Viguier-Hovasse, explaining these include: Distract, Direct, Delegate, Document and Delay.

“Of course, my dream is to see street harassment decrease, but the KPI we have is to train one million people before the end of 2021,” she continued.

The training process began for L’Oréal Paris employees in 2018, in France then abroad, and an internal campaign launched for Stand Up last November.

“It has been the most engaging subject that we have posted on our internal platform,” said Viguier-Hovasse.

In a next phase, the program was rolled out to L’Oréal Paris’ partners, such as advertising and creative agencies, to in-store beauty advisers and places like the French research center Centre National de la Recherche Scientifique. 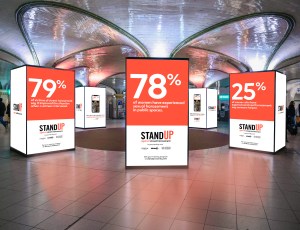 A rendering of Stand Up posters in a train station.  Courtesy Photo

Training, which takes about 20 minutes, can be done in person or online via country-specific platforms, such as Standup-france.com in France. The international platform is: Standup-international.com.

Stand Up will launch on International Women’s Day, March 8, in France, Spain, Argentina, Canada and the U.S. It is to be backed with advertising, including TV, print, digital — on L’Oréal Paris’ social platforms — and radio.

The program will have another awareness push during International Anti-Street Harassment Week, beginning April 19. And later in 2020, Stand Up, which partners with various NGOs for training, will be introduced in another six countries.

In France, L’Oréal Paris and Hollaback! teamed with the NGO called Fondation des Femmes. On March 6, they will unveil the Stand Up program at the Gare de Lyon in Paris.

The location was chosen since women are often harassed in train stations, but the call to action will be made in other types of locales, too, including schools and festivals — public spaces considered high-risk for women when it comes to harassment.

“When you are harassed on the street, it [diminishes] your self-worth and your power,” said Viguier-Hovasse. “It’s really preventing women from achieving their ambitions.

“We are the number-one beauty brand in the world, so we have the power to make the subject and the cause resonate a lot in the consumer’s mind,” she added. “We have to use our strength to take [on] those kinds of [issues].”