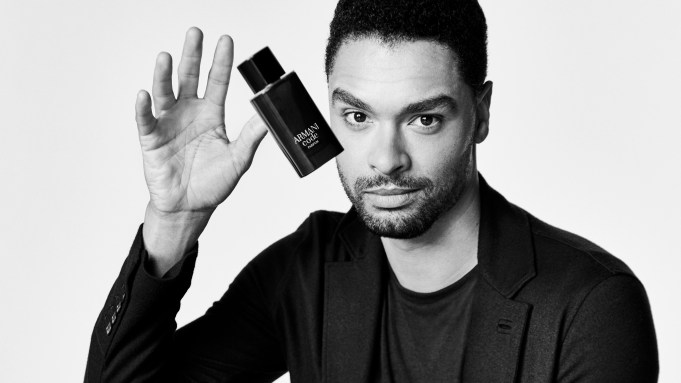 PARIS — Armani Code, the men’s fragrance franchise launched 18 years ago, is getting a new face — Regé-Jean Page — a new look and a new perfume.

The British actor will appear in the campaign, directed by Manu Cossu and shot by Damon Baker, which breaks in September.

“Regé-Jean Page interprets and explores the nuances of a gentle, profound masculinity that is not ostentatious or showy,” Giorgio Armani said. “He authentically and spontaneously represents the cultural richness and vitality of this moment in time.”

Page — whose breakout role was as the Duke of Hastings in the first season of the Netflix series “Bridgerton,” in December 2020 — stars in the Armani Code spot, where everything moves backward. People walk the wrong way around, clock hands circle counterclockwise and basketball players propel in reverse.

Yet, Page moves forward walking, then running, through streets, until he encounters a woman. They gaze intently at each other, there’s a glimpse of the Armani Code Parfum bottle, then the world is set on the right course again.

When Page was contacted about the project, he wondered how a scent-related discussion would unfurl.

“But they spoke so passionately and so creatively about how they wanted to deconstruct the fragrance and reimagine it,” Page said. “They wanted to explore the themes of masculinity and progress, what Code and rewriting a code meant to them, how they could tie that into their own view of progression. I’d never spoken so in-depth about a fragrance before, but suddenly all this came to life because I had the privilege of speaking to people who felt very passionately about this.”

Page explained he realized: “There’s a whole world to explore here, and I had no idea it had existed before. So, I was very keen to get involved after that.”

The actor talked of the Armani brand’s iconic style. Page was aware that the film industry, Armani’s fashions have had a big presence in films such as “The Untouchables,” “Goodfellas” and “Batman.”

“If you think about the coolest, most iconic men on screen and in culture, then you’re already thinking about Armani,” said Page, who added it is a thrill to be involved in that legacy and help bring it forward.

Scent, he explained, is an integral part of everyone’s life. “Fragrance is so intimate,” said Page. “It’s so tied up with our most intimate emotions and memories.”

The campaign was shot in Buenos Aires, Argentina — one of the most beautiful places Page had ever visited — and set to the soundtrack “A$AP Forever ft. Moby” by A$AP Rocky. Page sprinted around for three days straight.

“But it looks so effortless,” he mused of his character in the campaign.

At one point, Baker was on the back of a jeep photographing Page as he ran and for fun, the vehicle kept picking up speed to test the actor’s pace.

Codes of all kinds, he said, are constantly being rewritten and are in a state of flux.

“The reason you keep downloading the IOS on your laptop is because the code needs to be up to date in order to function,” he continued, adding that is ditto for masculinity.

“That’s the same for all people,” he said. “You have to be aware of each other. You have to be self-aware and willing to listen, change, grow and adapt to be the best, strongest version of yourself — most able to connect with the world around you.”

Armani Code is undergoing more than a revamping, according to Véronique Gautier, global president of Giorgio Armani fragrances and beauty at L’Oréal, the brand’s licensee.

“It’s a completely new story [of masculinity],” she said. “It’s part of the DNA of the designer, who is known to synthesize the mood of the times, projecting to the future. So we would like to rewrite the codes.”

In the campaign, the connection between two people puts the world back in order. “It’s a story of progress,” said Gautier.

She calls Page, whose upcoming films include “The Gray Man” and “Dungeons and Dragons,” “modern,” with a vision of masculinity mixing softness and strength.

“He did a juice that could be classified as feminine,” said Gautier.

For the parfum, he infused the original Armani Code’s woody, aromatic signature with iris notes.

Iris from Morocco is blended with aldehydes of iris. Vert de bergamot and bergamot heart come from Calabria, Italy. Clary sage is sourced from Provence, in France, while in the base is tonka bean absolute from Brazil and cedar wood heart from Virginia. There are both natural, sustainably sourced and synthetic ingredients.

The new eco-conceived, refillable bottle is full of contrasts, too. It’s black, with some transparency. The flacon has square and rounded shapes.

The Armani Code eau de parfum and eau de toilette will ultimately come housed in the same bottle as the parfum.

With the arrival of Armani Code Parfum, the franchise will jump into the Metaverse for the first time with a game in Fortnite, starting in September. It has as its goal to turn the world back to order.

Armani is the third-ranked men’s fragrance brand worldwide, and Armani Code is in the top 15 globally and top 10 in the U.S. L’Oréal executives would not discuss projections, but industry sources estimate Parfum will drive the franchise’s sales up 20 percent, so it enters the top 10 around the world.

Armani Code Parfum is to be launched as a preview direct-to-consumer in August, prior to a full retail rollout at the end of that month and in early September.