The line’s third fragrance, Yes I Am Fabulous, launches in March.

PARIS — Actress Shay Mitchell has signed on for a new role — as the ambassador of Cacharel’s Yes I Am fragrance collection, WWD has learned.

The first scent of the women’s line, in a bottle resembling a lipstick, launched in 2018. Yes I Am Pink First followed last year, and starting in March Yes I Am Fabulous comes out.

The first two fragrances’ strong reception drove Cacharel women’s scents up in the rankings to 10th place in France and in Spain. The Yes I Am perfumes, which target 15- to 25-year-olds, are also particularly strong sellers online, according to Guillaume de Lesquen, global president, designer brands fragrances at L’Oréal Luxe.

He attributes the scents’ success to their mix — from the packaging to Yes I Am’s empowering message of  “strength, independence and confidence” to the juice.

De Lesquen deems the time ripe for the brand to go broader with a collection of scents, like a line of lipsticks, which speaks to Millennials, a demographic that particularly enjoys playing with fragrance like they play with different facets of their personality.

“Yes I Am is about who you feel you truly are,” said de Lesquen.

Each scent is linked to a color — red, pink and purple — channeling different attributes. Red, for instance, is meant to embody power. More perfumes will be added in time.

Yes I Am price points start at $39 for a 30-ml. eau de parfum, on the low end of the prestige perfume spectrum. The line is “extremely approachable, accessible to Millennials all over the world,” said de Lesquen.

Mitchell, whose breakout acting role was in the TV series “Pretty Little Liars,” was chosen to front the franchise in part since she’s widely known, said de Lesquen, and that includes “in many countries where we would like to expand Cacharel with the launch of this Yes I Am collection.”

Those are in North America, Eastern Europe and Asia.

De Lesquen called her a multifaceted icon. “She is a mom, an entrepreneur, a movie star,” he said.

Mitchell is to appear in online videos, sometimes giving tutorials, for Yes I Am, which will have a major digital drive. Online quizzes have been developed so people can find their color and perfume, for instance, and there’s the possibility of ordering multiscent samples.

Yes I Am Fabulous will make its debut starting the first week of March in Europe. The whole collection is to have broad online distribution, including on Amazon, probably later that month.

The line will be backed by an ad campaign directed by So Me and starring Mitchell alongside Mademoiselle Gloria, Rachel Tee-Tyler, Marta Lozano and Cajsa Wessberg. 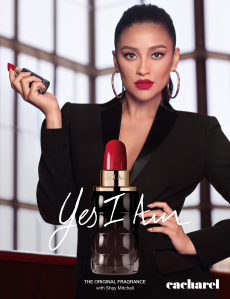 A Yes I Am ad.  Courtesy Photo

Mitchell spoke with WWD about the Cacharel project, her Béis range and the joy of wearing many hats.

WWD: What does this tie-in with Cacharel mean to you?

Shay Mitchell: I was literally over the moon to be asked to be the ambassador. I feel like it was such a great fit synergistically. To me, Cacharel has always been about freedom, independence, empowerment and I truly feel like they captivated the entire essence of the brand with this collection.

I was really excited to be able to represent the collection as a whole, because I feel like women — we’re all diverse, we’re determined and outspoken in our own ways, not only as it relates to one person to the next but sometimes even amongst ourselves from day-to-day.

I’m constantly changing from the morning until the night, as my boyfriend will say. He’s like: “You have many different personalities.” So I feel the same way with this perfume collection. I don’t have to choose just one.

WWD: Have you been a longtime lover of fragrance? 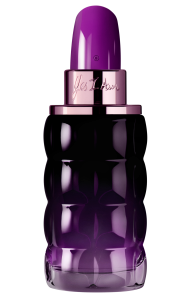 S.M.: I have. Growing up, I always watched my mom getting ready — it was the last thing she did before she left the house. I feel scent is such a huge part of who you are…it’s something that people remember you by. It’s exciting to think that my daughter will put this fragrance and me together, and it will remind her of me.

WWD: You’ve recently launched a baby line in your travel brand Béis. What was exciting to you about that?

S.M.: [The Baby Collection] is something that I really love. It incorporates travel and products that you use to take while you’re traveling. If I can make it easier for the moms out there, when they’re on the go with their children, that’s amazing. It’s been really fun.

WWD: What’s next for Béis?

S.M.: There are a lot of different things that we have in the pipeline coming up for this year. [We’re] getting into more fashion pieces, and work totes we’ve been really successful with — anything that I am genuinely passionate about and that we see our customers want.

The great thing with social media is that I really do ask questions. I go [online] and find out what [people] like, what colors they want to see, what fabrics they’re in to. They really do help us choose what we come out with.

WWD: What’s the biggest upside and downside to social media?

S.M.: The biggest upside is it connects so many of us around the world. It allows us to send information immediately, so we can be aware of things that are going on.

The downfall of it sometimes is that we look too much to what other people [are doing]. FoMo [is] a term that [is] used a lot with social media. I feel like you’re comparing sometimes your experiences to other people’s based on what you’ve seen on social media.

I really try to stress to a lot of my younger fans that you shouldn’t be comparing yourself to other people, especially with what you see on social media.

WWD: You travel a lot. Other than Barcelona, which you love and where you shot the Yes I Am campaign, what are other favorite destinations and places you’d like to visit?

WWD: What’s up next for your Amore & Vita Productions company?

S.M.: Fox actually just picked up [“The Cleaning Lady”], so we’re going to be taking that to pilot. I am going to put on my executive producer hat, so that’s really exciting.

WWD: What about acting?

S.M.: We just found out that we got picked up for season two of “Dollface,” which is on Hulu. So we’re going back to shooting that in May. It’s so much fun because it’s different from anything else that I have done. It’s more on the comedy side of things, whereas I’ve mostly done drama.

WWD: What sort of acting roles would you like to try?

WWD: You are juggling a lot.

S.M.: I thrive when I am super busy. I love the challenge and the feeling I get from embodying so many different roles, and especially now. I have a daughter; I want her to understand not only the value of hard work, but the growth that comes from trying new things and being multifaceted. You don’t just have to just be or do one thing these days, which is amazing.

You can wear as many different hats as you want as long as you have the time to do them all individually well and as a whole. I love getting to wear all the many different hats, and I am sure there will be even more that I get to put on in the future.