Achim Daub and Heinrich Schaper will leave the German fragrance and flavors supplier, which is combining its Flavor and Nutrition segments.

PARIS — There are changes afoot in the executive board of Symrise AG, which is merging two of its divisions.

The German fragrance and flavors supplier said on Wednesday that Achim Daub, who heads up the group’s Scent and Care division, and has served on Symrise’s board since 2006, is leaving the company effective March 31 to pursue other professional prospects, on mutual agreement and best terms.

Symrise said succession planning for the division is underway, and that in the meantime, Heinz-Jürgen Bertram, chief executive officer of Symrise, will steer the segment.

Heinrich Schaper, an executive board member and head of the Flavors segment, is to retire and leave Symrise on March 31.

In an interim move, during a succession-planning phase, Jean-Yves Parisot will take over the global leadership of the Flavor segment in addition to his oversight of the Nutrition division.

Concurrently, Symrise will combine its Flavor and Nutrition activities.

Olaf Klinger, another executive board member, is to continue heading the finance, legal and IT department of Symrise.

In a research note, Jeffries analysts Ryan Tomkins and Martin Deboo wrote that key issues now relate to Daub’s replacement, plus whether there will be further executive changes, most notably regarding the CEO, who has been in place for approximately 12 years.

“And how the division merge will affect the potential for asset integration, as well as reporting disclosures, especially for the pet food business,” the note said. 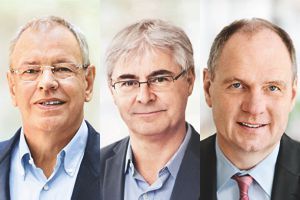 Michael König, chairman of Symrise’s supervisory board, said in a statement that the group “will be able to leverage the strengths of the new Flavor and Nutrition segment even more effectively, increase customer penetration and further differentiate itself in the market.”

“With Heinrich Schaper and Achim Daub, we are saying goodbye to two very committed leaders, who have significantly shaped Symrise’s strong position,” König said. “Heinrich Schaper served Symrise and its predecessor companies for more than four decades. Today’s global presence of the Flavor segment and the excellent relationships with major customers are due to a far-sighted strategy.”

König thanked Daub, as well. “He has consistently driven forward the growth and expansion of the fragrances business over the past 15 years and very successfully developed new application areas,” the executive said.