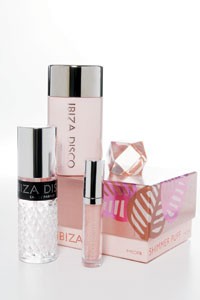 NEW YORK — In an industry of giants, the Extracts trade show gives smaller beauty companies a hospitable venue to get noticed. In recent years, the percentage of first-time Extracts exhibitors has grown, reaching nearly 50 percent at the spring show. That figure was up from 38 percent from the previous year. In all, 132 companies — which includes 64 new exhibitors — showcased their wares at the natural beauty and wellness expo held at the Jacobs K. Javits Center here April 8-11. For some fledgling companies — such as the men’s grooming line Scruff New York and Naked Paint, a range of handmade body creams — Extracts marked their very first trade show. Several exhibitors commented that while traffic stalled somewhat over the weekend, they were pleased with interest they received from buyers, particularly international retailers. The event, organized by George Little Management, attracted 5,300 attendees, including buyers from Nordstrom, Bed Bath & Beyond and Target. Among the rows of established players and entrepreneurs, several new notable takes on beauty and wellness emerged.

AROMACHOLOGY
Fruits & Passion, a familiar sight at Extracts, introduced Aromachology, a line of products designed to create a sense of well-being through essential oils. “We’ve taken a category that has been oversaturated and fine-tuned it,” said Heather David, Fruits & Passion’s director of business development, USA. The essential oils are available in their purest form or can be blended with Aromachology’s neutral bath oil or massage oil. For those who aren’t well versed in essential oils and their benefits, Fruits & Passion concocted a range of preblended bath oils, foaming baths, massage oils and floral waters. Each product is formulated to solve a specific problem, such as the Respiratory Congestion Foaming Bath and Sore Muscles Massage Oil. The assortment of 10 Pure Essential Oils ranges from the $12 Sweet Orange (said to calm and improve concentration) to $18 for Rosewood (said to relieve anxiety). The bulk of the products sell for between $20 to $22. In June, the line will nab shelf space in all eight California-based Burke Williams stores and Whitney Chemist in New York City.

SCRUFF NEW YORK
Men’s grooming lines can be just a little too fancy, noted Peter Tarulli, creator of Scruff New York, a new men’s care collection that made its debut at Extracts. “Less is more,” said Tarulli, a former district manager for The Art of Shaving, who helped open the retailer’s concept store in the Time Warner Center at Columbus Circle. “Right now, this is where men are,” he added, pointing to his line of seven straightforward skin care products. The line’s name and minimalist packaging, ties into Tarulli’s mission of creating an approachable “personal maintenance” line that tends to common skin concerns. The product assortment includes 2/Wash (mild cleanser); 2/Scrub (exfoliator); 2/Smooth (ultralight moisturizer); 2/Shave (shave gel); 2/Heal (aftershave spray); 2/Hide (eye balm) and 2/New York, a “city defense lotion” designed to manage oil and shine. The company will donate a portion of the proceeds from 2/New York to the Multiple Sclerosis Society of New York. Products, which Tarulli said are ripe for specialty shops and apothecaries, range in price from $18 to $30. The goal is to get Scruff in 40 doors by yearend.

LITTLE TWIG
Extracts show first-timer Lenie Ramos dreamed up Little Twig after her sister snubbed her nose at the bubble bath Ramos had bought for her niece. A glance at the ingredient list revealed that the product contained substances that can irritate young skin. Soon after, Ramos — a graphic designer by training — got to work on formulating a mild, all-natural bubble bath. In the two years since launching Little Twig, Ramos has built a 10-item collection of natural baby products. Ramos said she consulted with pediatricians and parents to develop the formulas, which are free of mineral oil, talcum and sulfates — ingredients that can be harmful to a baby’s skin. The products, which range in price from the $6 caterpillar washcloth to the Baby Basics gift set for $44, have already found a home in high-end retailers such as Fred Segal and ABC Carpet & Home. New additions to the line include Diaper Cream: Soothe, Travel Basics Gift Pack — stocked with mini versions of baby wash, lotion, diaper cream, baby powder and a bath mitt — and Scrubby Bug Bath Mitts (available in ladybug or bumble bee). Ramos attended Extracts to introduce the brand to a wider market and attract some sizable retail accounts in the process. As part of ramping up the company’s public relations effort, she also plans on attending the upcoming Extracts shows, scheduled for Aug. 13-16 and Nov. 13-15.