Eye Candy: Glam That Stands The Test Of Time

A look at the winners of Outstanding Lead Actress in a Drama Series from the last four years.

When the 72nd Primetime Emmy Awards air this year on Sept. 20, the virtual production will be a new experience for all involved, from the stars to the celebrity makeup artists, groomers and hair stylists who prepare them for the ceremony.

The dress code is “come as you are but make an effort,” as noted in a letter reportedly sent to the nominees and signed by show organizers and host Jimmy Kimmel. “If you want to be in formalwear, we’d love that, but equally if you’re in the U.K. and it’s 3 a.m., perhaps you want to be in designer pajamas and record from your bed,” it went on.

Glam, too, will most likely be more minimal. Whether nominees opt for custom gowns or cozy PJs, bold makeup or a more bare-faced esthetic, one element is clear: The show will be unprecedented.

Until then, here are the beauty looks from the marquee award, Outstanding Lead Actress in a Drama Series, from the last four years, with commentary from the makeup artists and hairstylists who created them.

Last year’s winner was Jodie Comer, who is nominated again this year for “Killing Eve,” along with costar Sandra Oh; Jennifer Aniston for “The Morning Show”; Olivia Colman for “The Crown”; Laura Linney for “Ozark,” and Zendaya for “Euphoria.” In 2018, Claire Foy snagged the trophy for “Queen Elizabeth II.” Previously, it was Elisabeth Moss for “The Handmaid’s Tale” and, a year earlier, Tatiana Maslany for “Orphan Black.” 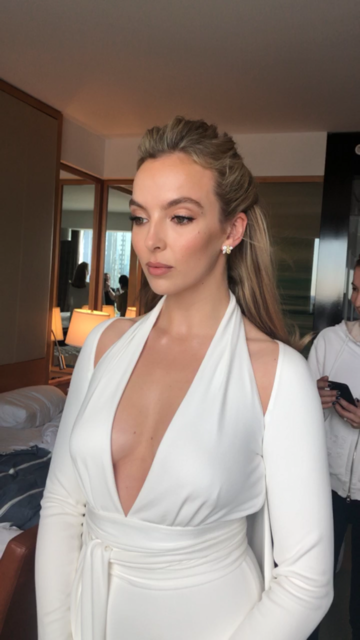 Hair: “I really loved the Tom Ford gown Jodie had chosen, and I wanted to show off those fabulous cutouts, so we decided a half-up hairstyle would be perfect,” said hairstylist Mark Townsend. “I was so inspired by photos of Catherine Deneuve from the late Sixties and early Seventies and wanted that kind of volume in Jodie’s hair, plus lots of shine.”

Comer’s damp hair was sprayed with Dove’s Style + Care Volume & Fullness Mousse, then “blow-dried with a round brush for volume, and her hair was set in hot rollers while her makeup was being done.” For volume, Townsend used the brand’s Volume and Fullness Dry Shampoo on her roots and back combed 2-inch sections for lift, then “gathered the hair front, the sides and top and secured those sections just below the crown with dozens of hairpins.” He finished off with Dove’s Compressed Micro Mist Extra Hold Hairspray “all over and very liberally to keep the hair soft, shiny and in place all night.”

Townsend continued: “Every day with Jodie is a dream. We had a lot of laughs while getting ready. When Jodie won it was such an amazing, proud moment. As hairstylists, so much of our work and so many of the details in the styles we create for red carpet events are relegated to the back of the head so we don’t always get to see that on the televised broadcast. But when your client wins, and they walk up those stairs to the podium, every camera is filming their backs so we get that half a minute of seeing our work and sometimes even in close up, and that is a really great moment.” 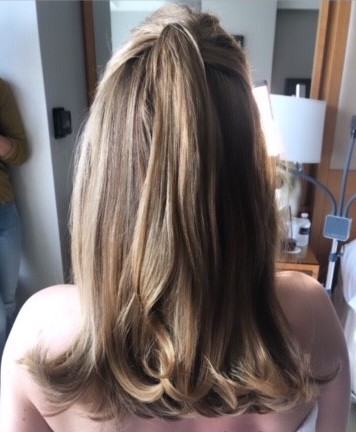 Face: “I remember such amazing energy in the room,” said Chanel makeup artist Nina Park. “I have been a huge fan of Jodie’s, and the first time we worked together was that Emmys. When she won, I remember feeling so ecstatic and incredibly happy for her. She was just glowing. She radiated through the screen.”

Using all Chanel, Park used Ultra Le Teint Velvet Foundation on the T-zone, then bronzer along the hairline, jawline and cheekbones. Blush in “alazane” was put on the cheeks, then powder in “20 clair-translucent 1” to the entire face and highlighting powder in “white opal” was applied on the brown bone, bridge of the nose and inner corners of the eyes. Brows were kept natural using stylo sourcils in “blond doré,” while eyes were done with “taupe” (from the glow natural eye shadow palette in medium) on the brow bone and along the lash line, then blended with “rose beige” on the center of the lids using fingers. An eclectic brown eyeliner (chanel stylo ombre et contour) topped the lash line and was blended with “platinum bronze” (lumières naturelles). Lastly, mascara was applied, and lips were lined with rouge crayon de couleur mat in “hazelnut,” then lightly tapped with rouge allure ink fusion in “beige naturel.”

Hair: “This was an interesting time with Claire as she was growing her hair out from her haircut in [‘The Girl In The Spider’s Web’],” said hairstylist Ben Skervin. “My challenge was always to come up with something different on short hair [that was] growing out. The dress was Calvin Klein, simple and very chic, so I wanted to create something to reflect that…Claire looks great with her hair a little bit boyish. I love the side part and how tight to the head the hair is and the high shine. I blow dried Claire’s hair straight with Color Wow Dream Coat Anti-Humidity Hair Treatment. I then used a flat iron so the hair was flat and straight. Then, starting at the nape of the neck [and] taking inch wide sections, I applied Bumble and Bumble Bb Gel with a comb. [I] kept taking sections and applying the gel [from the] root to ends until the whole head was covered and laying flat and smooth. I then used a hair dryer to dry the hair smoothing with my fingers.”

Face: “I had worked with Claire since before ‘The Crown’ premiered on Netflix,” said makeup artist Quinn Murphy. “I remember the first time we did press together, and no one had seen the series yet, but we knew it was going to be big. Claire and I worked together every time she was in the U.S. on big red carpets, award shows and tiny screenings and everything in-between. Her winning the Emmy was a great way to finish ‘The Crown’ experience, and I felt proud that I was able to be on that journey in a very small way. I was watching the show on TV like everyone else and when they announced her as the winner I thought that was the best ending to an iconic series and performance….Claire wore a timeless white gown with a bow in the back. It had a simple and elegant shape, and I wanted to give Claire glamorous yet modern and timeless makeup. We knew we wanted to do a red, berry lip and have that be the focal point of the makeup. It was accompanied with a light eye and a lot of mascara and false eyelashes. I used Burt’s Bees liquid lipstick in Glacial Glide for the lip.” 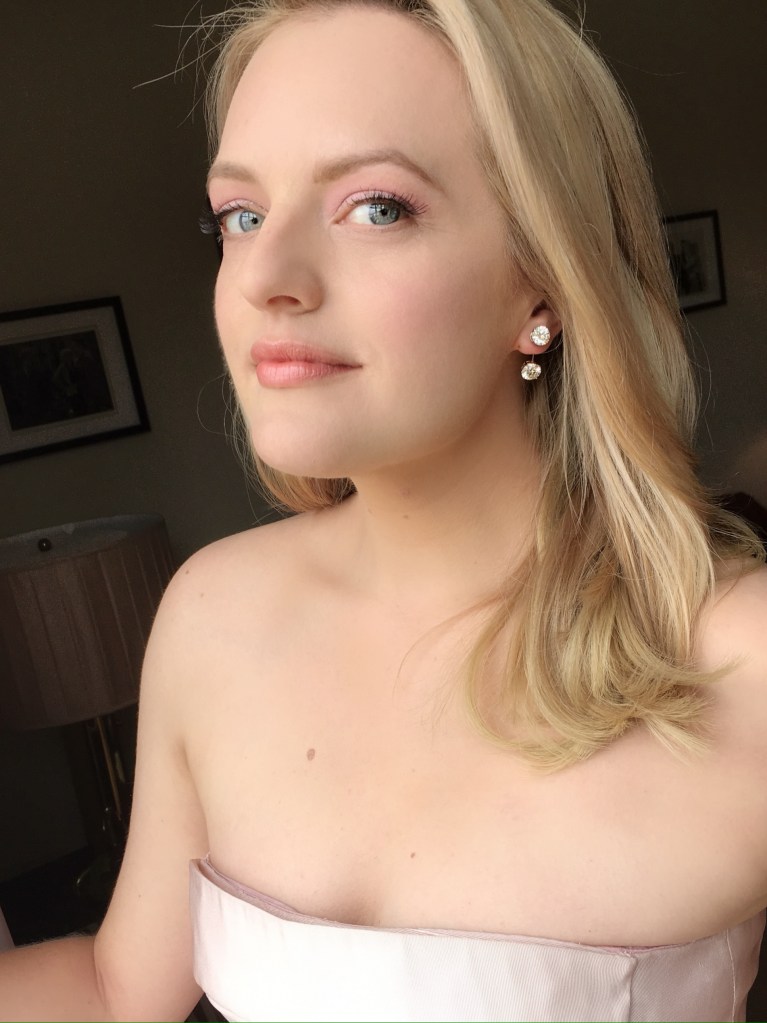 Hair: “We got ready at Sunset Tower [Hotel] and listening to Florence and the Machine while eating tuna tartare and hamburger sliders and sipping on Moscow mules,” said hairstylist Tommy Buckett. “It was very fun and me and Daniel Martin watched the winning moment together and literally leaped off the couch and screamed. It was a moment that you were so happy to see and share because she worked so hard for this.…I have known Lizzie for many years before this, and she put her heart and soul into this role for ‘The Handmaid’s Tale.'”

The look: “The dress was a light pale pink and kind of a vintage silhouette, and I wanted to do something fresh and modern and not so set or too done, otherwise it would look costume. My inspiration was Nineties supermodel, big full blowouts that look healthy and shiny and bounce when you walk. Full glitz hair and still moves. I used a mousse at the roots and mid-shaft and a serum on the ends to add shine and seal the cuticle. I round brushed blow dried the whole thing and set her hair in hot rollers and then brushed it all out and used a hairspray to finish the look.”

Face: “The dress was very girly, so I wanted to keep her makeup fresh, modern and a bit undone,” said makeup artist Daniel Martin. “Having too polished makeup and hair would have taken the entire look to another place, so we felt a bit rebellious and went the opposite, considering how formal the Emmys can get. Always before a big event, Lizzie sees our friend, [facialist] Joanna Vargas for relaxation and rejuvenation. Lizzie is also a fan of Tatcha, so her skin is pre-makeup prepped using The Essence and Dewy Skin Cream. I wanted to create a monochromatic pink moment with her makeup, so I used a creme blush on her eyes and cheek. Her lipstick was a Dior liquid lipstick in a color called, ‘miss satin.'”

Martin continued: “There’s always a Pinterest picture swap of hair and makeup inspiration between myself, Lizzie, her publicist Erica Gray, Tommy Buckett, her hairdresser, and Karla Welch, her stylist, prior to the big day to establish the tone of the look. This look was the beginning of her winning streak that season, so I couldn’t have been more excited and honored to be on that journey with her. I remember her being especially calm and relaxed that day too. It’s never stressful and always fun with Lizzie when we have these big events.”

Hair: “We wanted a textured look to contrast the very simple, structured dress…something just a little unique, so did three messy buns instead of just one,” said hairstylist Creighton Bowman. “It created a fun profile and made Tatiana super happy. As for products, my go-tos are Bumble and bumble Surf Spray at the roots and Bumble’s Thickening Spray all over on towel dried hair. [I did] a loose blow out until dry, and then I used a half-inch curling iron and a half-inch flat iron to add to the wild texture. Then, I pulled the hair back into three vertical ponytails, one at the base of the head, one in the middle and one just below the crown. [I] loosely wrapped each one and secured with both hairpins and Bobby pins. The messier the better….As for the winning moment, it was awesome. It’s always a thrill to see your work so exposed, but it was extra special because Tatiana is amazing and a good friend. We were all screaming.”

Face: “Tatiana was wearing a beautiful red dress, so I wanted to play up her eyes and have them be the main focus,” said makeup artist Mai Quynh. “I layered deep chocolate browns and bronze shades for the eyes, and [I] kept the rest of her face soft and neutral to show off her amazing skin….I remember we got her ready at a hotel, and she was just so chill and relaxed. “We listened to music and ordered food and got her ready with plenty of time to spare. She left for the show, and I went to a concert at the Hollywood Bowl. So, when she won, I had no idea what was happening until I looked at my phone and saw a bunch of exciting texts from her p.r. and the rest of the glam team. I’m so happy I was a part of this memorable night.” 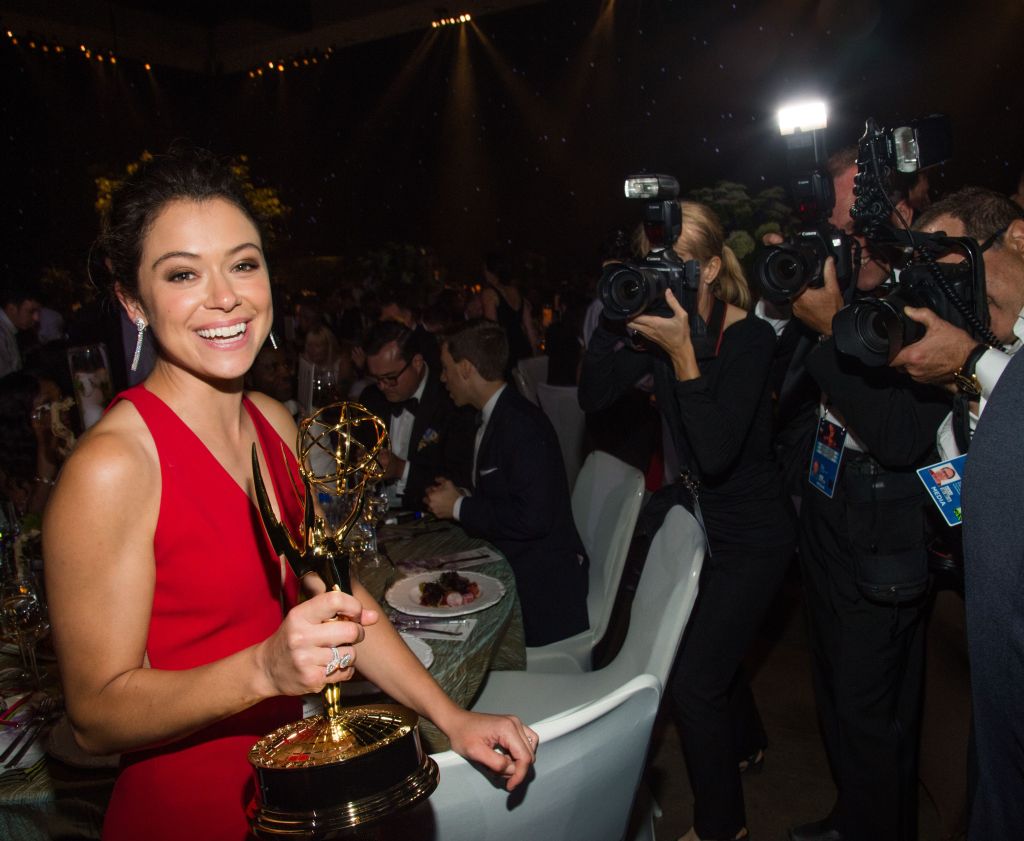