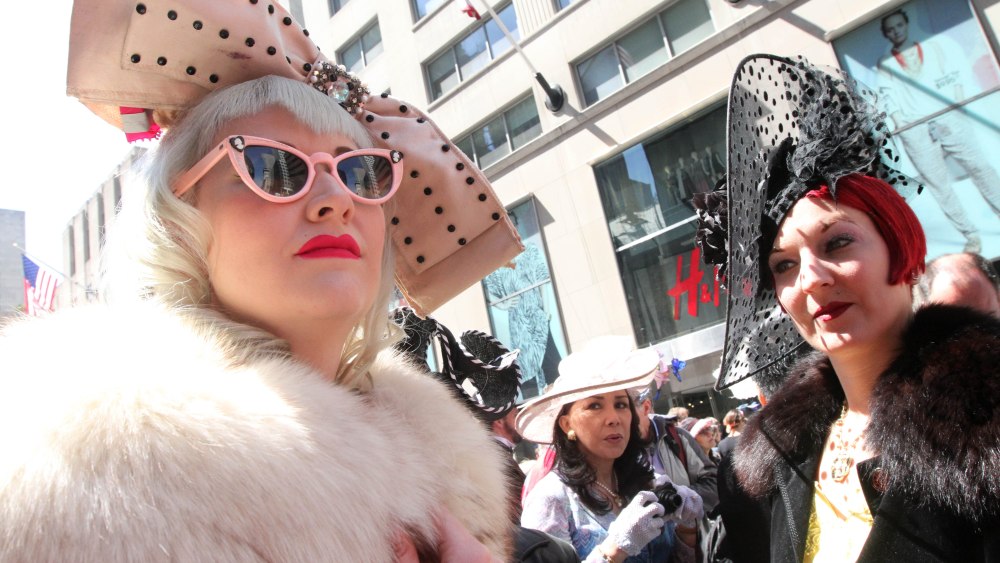 The Fifth Avenue Easter Day Parade is, of course, canceled this year in the wake of working from home and social isolation, but it is a tradition that spans centuries. Melissa Marra-Alvarez, co-curator of the FIT Museum’s upcoming exhibit, “Head to Toe,” noted the significance of the Easter bonnet in Western dress.

“Hats were an important fashion accessory throughout the 19th century,” Marra-Alvarez said, noting the Easter Day Parade started spontaneously in the 1870s as affluent parishioners left their Fifth Avenue churches in their finery. It quickly became an expression of sartorial prowess: “Old proverbs spoke of bad luck for anyone who did not have something new to wear for Easter,” Marra-Alvarez said.

An early iteration of the street-style flâneurs we see today, the parade evolved into a circus showcasing trends and recent purchases. “Extravagant millinery displays featuring flowers, feathers, and, at times, entire birds, became overt symbols of femininity and class status,” Marra-Alvarez said. “As traditional symbols of spring, flowers, birds and pastel colors are also tropes for the rebirth and renewal associated with Easter.”

The beauty looks of the era also had to complement the aesthetics of the dress and, at times, physically support it. “This isn’t specific to an Easter bonnet, but in the early 1900s, women would often wear their hair piled high atop their head, often with pads of false hair hidden within, to support the enormous wide-brimmed hats,” Marra said.

Nowadays, hairstyles in lieu of traditional bonnets are more common for many, but Easter has become a day when people can flout their most outrageous creations. “The Easter Parade has become an extravagant display of fanciful hats, headpieces and hairstyles,” Marra-Alvarez said. “While it still is about dressing to impress, it’s very much about the headpieces and creativity!” Here, some fanciful creations from years past.