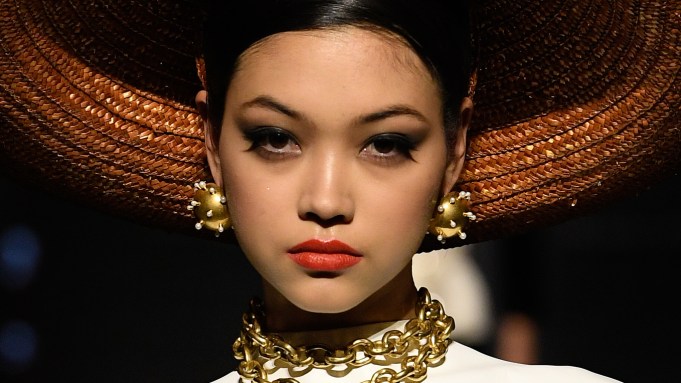 Eyes had a strong showing at the fall 2022 couture shows in Paris.

At Armani Privé, models’ peepers were outlined in a smudgy black. Linda Cantello, Giorgio Armani Beauty’s international makeup artist, said instead of focusing on today, she harked back to a happier time, when people went out a lot.

“It was that whole kind of louche hanging out in a club — but not the ’70s,” she said. Instead, it was the ’20s, “when people were happy,” that Cantello had in mind, including the long fashion silhouettes of that era.

“But you’re not going to do a typical ’20s look,” she said. “You have to bring it into modern times.”

Cantello wanted it to seem like the models had been hanging out, having a good time, with their eye makeup imperfect. She elongated brows to top it all off.

At Balenciaga, once models shed their face shields, some eyes appeared with long lashings of liner.

Makeup artist Inge Grognard said she took inspiration from “the collection and a modern version of a classic eyeliner.”

“We went for a deep black gel eyeliner, laser sharp and long, no mascara, skin minimally retouched, well-hydrated [and] same for the lips,” she said.

At Charles de Vilmorin, eyes were embellished with graphic black lines and colored powders. Then often, the same looks were drawn on to their chests.

“The looks in the collection were disproportionate and counteracted the natural shape of the body to create inhuman and theatrical characters. We reproduced this in makeup by contracting the natural shapes of faces,” said makeup artist Anaëlle Postollec.

For some models, traces of makeup distorted the look of their eyes. “We resumed Charles’ creative process with painting,” said Postollec. “We wanted to create a link between hand-painted looks and makeup. We reproduced brush strokes on faces with painting tools — paint brushes — [and] raw features. The goal is to paint on faces as Charles instinctively paints on his dresses.”