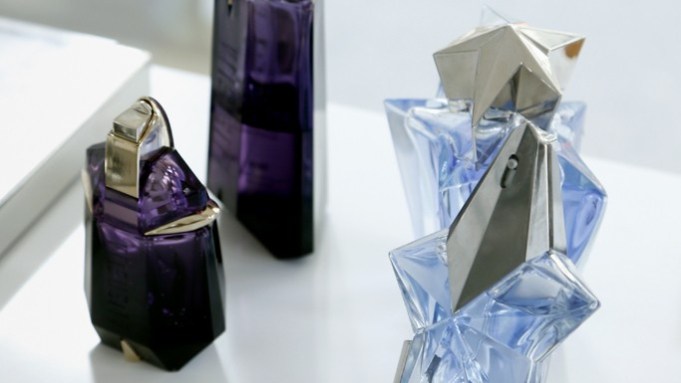 PARIS — Do fashion and beauty go together like a horse and carriage?

With the likes of perfume stalwarts Mugler, Paco Rabanne and Rochas striving to find the right creative talent in their studios — and Jean Patou about to return to fashion after a 26-year hiatus — it would appear so.

“If you look at the top 10 fragrances in the world, they are linked to a fashion house,” said Christian Courtin-Clarins, president of Groupe Clarins’ supervisory board. “The name of Angel or Alien is more known than Thierry Mugler himself, and it’s not normal,” he continued, referring to the brand’s two best-selling scents.

“So we want to [reinvent] what will be Mugler,” added Courtin-Clarins of the label formerly called Thierry Mugler. “And it will be Mugler of the 21st century.”

Patou fashion will be revived, too, possibly even by the fall Paris ready-to-wear collections next year, said the brand’s vice president Bruno Cottard.

“For me, a great house that claims to be true luxury needs fashion to legitimize its image in fragrance,” he maintained.

The Patou name has been kept alive by its perfume business — best known for the Joy women’s scent, once billed to be the world’s priciest fragrance.

While Cottard said it’s too early to discuss the strategy for the label’s fashion at length, the business will not be licensed out entirely and only if Patou were to maintain a direct creative role.

Although fashion isn’t generally a core business — or competency — for beauty firms, it remains a strong lure to help boost fragrance sales. Over the years, beauty companies have taken various strategies for running their fashion businesses — ranging from keeping everything in-house to licensing the activity.

Rochas has had a long stretch as a pure beauty player. Founded in 1925, the brand shuttered its fashion business between 1953 and 1989. Procter & Gamble Co., which became its full owner in 2003 as part of the Wella acquisition, in 2006 realized fashion wasn’t part if its core competencies. So, after several years under acclaimed designer Olivier Theyskens, Rochas’ fashion activity was stopped again to analyze the best way to move forward with it, explained Antoine Delgrange, the label’s president, who oversees both the fashion and fragrance.

Two years later, the activity was restarted with a new model where brand building was left to P&G, which outsourced the rest of the fashion. Gibò Co. SpA now makes the rtw, bags and shoes.

“Overall [we’re] very happy” with the Gibò license, said Delgrange, who explained the fashion and beauty sides of Rochas work closely together on branding, for instance.

A unified brand image is so crucial to Mugler that it’s looking to recruit a single, full-time artistic director to oversee its entire business following the departure in April of Nicola Formichetti, the stylist called in two years ago to juice up the fashion.

Clarins purchased Mugler in 1997 and in 2003 closed the money-losing fashion activity. The label subsequently licensed out its men’s wear to focus mostly on building the fragrance portfolio and quietly resuscitated its women’s wear line in 2008.

“You need to have a global vision for not only the fashion, but also the fragrance and accessories,” said Courtin-Clarins.

Virginie Courtin-Clarins, his daughter and a granddaughter of the company’s founder Jacques Courtin-Clarins, was recently named Mugler’s director of development, marketing and communication. She noted a strong link between fashion and fragrance in that each directly plays on a person’s emotions and that synergies can be built up between the two — in terms of brand communication, for instance.

Mugler’s fashion business remains small. According to industry estimates, the total brand generates $800 million in retail sales annually, with 90 to 95 percent stemming from fragrance and the rest split between rtw and accessories.

There are plenty of challenges for beauty companies running fashion labels.

“You might sometimes think they were in competition with each other — internally, at any rate,” said Louise Rosen, founder and chief executive officer of The Message Inc., a Paris-based company focused on strategy and copywriting for luxury brands. “Cosmetic companies like to recruit from business schools; in fashion this is not where the hot new talent is found. Fashion brands often have a love-hate relationship with their cosmetic counterparts.”

Indeed, some have not been able to bridge the divide for very long. L’Oréal famously tried in 1990, when it jointly bought Lanvin with Orcofi. The French beauty giant raised its stake gradually to assume complete ownership in 1996. But in 2001, L’Oréal sold the brand to Harmonie SA, saying it wanted to “continue refocusing on its core business.” (A year prior, the Lanvin fashion label represented a mere 0.4 percent of L’Oréal’s consolidated sales.)

The differences between running beauty and fashion activities are myriad. Whereas a fashion business renews itself every six months, creating a fragrance can take much more time.

“Beauty, at the end of the day, is a volume business,” said Simon Nyeck, academic director of ESSEC’s M.B.A. in international luxury brand management. “It’s really numbers, figures. It’s accessible luxury.” He added that beauty tends to be more advertising- and promotion-driven than fashion.

To revive a fashion brand, having directly owned retail is seen as crucial.

“In order to have good brand visibility, you need to open your own stores, and obviously, because you are very late to the party, you’re not going to get the right space, or the right space comes with a huge price tag,” noted an industry source. “So if you are doing [beauty and fashion], unless you have really amazing brand equity on the fragrance side or on the personal care side, I don’t think it’s worth it.”

Yet there are success stories.

Puig, founded 99 years ago, only ventured out of the beauty space in 1995, when it invested in Carolina Herrera’s fashion activity. Since then the company has built up its fashion portfolio, and it now owns the fashion and beauty businesses of Herrera, Nina Ricci and Rabanne. The company will be able to further play on fashion-fragrance synergies for Jean Paul Gaultier (whose fashion it owns) once it takes back the perfume business in mid-2016, when the license with Shiseido’s Beauté Prestige International ends.

Rabanne has had some hit fragrances, such as the men’s scent 1 Million. And the brand just this summer signed on a new creative director — Julien Dossena — who became the third designer in three years to take the helm of the label after Puig revived it in 2011.

Industry sources laud how Puig juggles its fragrance and fashion activities. Eva Quiroga, an analyst at UBS, called it “coherent.

“For them, it’s like there’s a beauty business and there’s a fashion business — and they are equally serious about both,” she said. “I think if the brand benefits from the fashion, then I’m all for it. If the fashion is irrelevant to the brand, then I don’t really see it. I think you have to be really lucky or very, very good at figuring out the right person for the brand.”

There’s no doubt fashion can fuel beauty — and vice versa.

“When a brand catches fire, it’s hot across all segments,” said Rosen. “And that’s more true today than ever. We now live in a world of permanent flow; you don’t need to physically move to go from fashion to lipstick when you’re shopping online. Categories need to be rethought to reflect how people actually interact and experience the brand.

“There are synergies between ad spend, brand awareness and distribution that can multiply the business opportunities,” she added. “In the giddy, short-spin world of fashion, it’s about letting go. Cosmetic companies might have to learn to take a few more risks.”