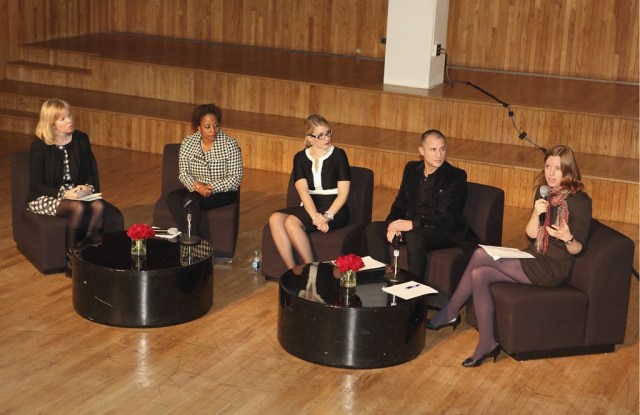 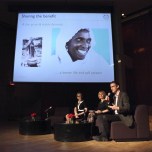 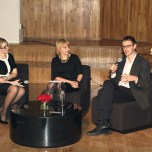 The Fashion Institute of Technology School of Graduate Studies sponsored the Symposium Series 2012-2013 on Nov. 16 to further integrate FIT’s annual capstone research as part of an industry dialogue.

Leatherberry tackled a key issue in the dynamics of the workplace. “We say [Deloitte Consulting] diversity is a fact and inclusion is a choice,” she said. Before bringing beauty into the discussion, Leatherberry set the context and framework by asserting that diversity effects everyone. In terms of hair care, Leatherberry stated that there are so many markets to reach. “Globally, companies need to understand local ingredients, local distribution and consumption patterns,” said Leatherberry. “They need to be a part of those communities and work with local businesses as well as political forces.”

Meanwhile a subsequent panel discussion moderated by Ellen Byron of the Wall Street Journal, addressed the questions surrounding diversity and globalization in terms of the brands they represent. The panelists included: Nicholas Gavrelis, vice president of global product development for MAC Cosmetics; Cheryl Wilson, director of global business development ethnic hair for Unilever; Ursula Wynhoven, general counsel for the UN Global Compact Office, and Alexandra Fritsch-Gil, marketing manager for Bumble and bumble. Collectively, all companies are developing marketing messages to a diverse community, according to the panelists. “By nature, there are some areas that are consistent that are met through general marketing needs,” said Wilson. “For those the conversation has been more about are we presenting the correct image? Are we in the right locations? Are we at the right price points? Are we letting the consumer know clearly on the package that this actually does work for her hair type?”

Byron spoke to Gavrelis stating that MAC’s mantra is all races, all ages, all sexes and asked him how that has impacted MAC’s product innovation and how they execute on such a diverse platform. Gavrelis turned the conversation to when MAC was first created. “The goal was to meet the unfilled need at the time,” said Gavrelis, “which basically was to create a community with makeup artists, photographers, models and drag queens.”

Speaking as a representative of the United Nations, Wynhoven said multinational companies are partnering with nonprofit organizations.  “Investment in women’s empowerment and causes that women care about in the workplace, marketplace and community are often a natural strategic choice for companies in this sector,” said Wynhoven. “Traditionally, such investments may be made through philanthropy, but these days, companies understand that they have so much more impact and simultaneously realize more business opportunities when they systematically use the core assets that they have.” She brought up a few examples including Avon’s use of products and distribution networks to raise awareness about domestic violence and women’s health. She also mentioned The Body Shop’s consumer engagement by raising awareness on sex trafficking of children.

As an FIT grad school alum, Fritsch-Gil explained her capstone research, how the market paradigm has shifted due to technology, what that model looks like and how it contributes to diverse messaging. “Our model is called the bonding helix,” said Fritsch-Gil. “In the past, we’ve noticed that a lot of marketers have created a one-size-fits-all message to an audience of many. But we see going forward the end of mass communication and the beginning of a one-on-one conversation with the consumer and the brand.” She noted that bonds are strengthened as consumers share their concerns with brands.

Following the panel, the final installment on the program included Fritsch-Gil and her classmate Ildiko Juhasz, marketing and training manager for Acqua di Parma at LVMH fragrance. Both interviewed Mark Davis, director of community and ethical trade for The Body Shop International PLC. After giving some background on The Body Shop’s community fair trade program, Davis spoke of the scarcity of land and how that translates to the beauty industry.

“If you look at especially emerging markets, there are significant increases in population and changes in people’s lifestyle,” said Davis. “When you think about the beauty products that we sell, if people have a choice to have a face cream or food to eat, I’m sure people are going to be making the choice to have food to eat. Mainly the ingredients that we use to make hand products — maybe oils or humectants — are made from agricultural products that rely on land [not for food production]. Which is why we need to work responsibility.”