Through a partnership with The Andy Warhol Foundation for the Visual Arts, fragrance marketer Bond No. 9 is introducing its second Warhol-inspired fragrance, dubbed Andy Warhol Union Square. The scent, which is available in a collection of 10 bottles,...

By Michelle Edgar and Jennifer Laing on December 28, 2007
View Slideshow 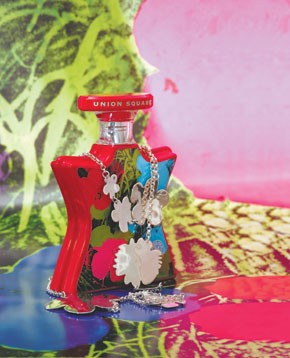 Through a partnership with The Andy Warhol Foundation for the Visual Arts, fragrance marketer Bond No. 9 is introducing its second Warhol-inspired fragrance, dubbed Andy Warhol Union Square. The scent, which is available in a collection of 10 bottles, each featuring a design based on Warhol’s “Flowers,” is set to launch in March and industry sources expect it to generate up to $5 million in first-year wholesale sales volume.

With her latest Andy Warhol-inspired fragrance, Bond No. 9 founder Laurice Rahme is trying to turn niche marketing into an art form.

Rahme plans to launch Andy Warhol Union Square, a fragrance sporting a bottle decorated with 10 variations of a famous “Flowers” series, done by the pop artist in the Seventies. The fragrances are being offered in a variety of 10 different bottles, each with a slightly different version of the flower print based on original silk screens of the “Flowers” print. For avid collectors and hard-core Warhol fanatics, the complete portfolio of 10 100-ml. bottles will be offered in a box for $1,500. For those consumers on a budget, they can buy one bottle featuring a representative version of the flower print for $195 for a 100-ml. bottle and $135 for a 50-ml. one

This second fragrance in a series of 12 Warhol projects follows the launch of Bond No. 9’s first Warhol fragrance dubbed Silver Factory, which launched earlier this month. For Rahme, various New York locales, as well as Warhol designs, go hand in hand.

“It’s not just about the art on the packaging, but it’s about taking the neighborhoods and places associated with Warhol and connecting it to his art,” said Rahme.

Much like Warhol, who was known for breaking down the boundaries between art and commerce, Rahme has continuously challenged the fragrance business with her unconventional methods. After building a fragrance business by naming her scents after New York neighborhoods, Rahme has increasingly looked beyond traditional methods into the art and retail worlds to generate new ideas. This past fall, Bond No. 9 broke ground by partnering with specialty retailer Saks Fifth Avenue to create an exclusive fragrance tailored to the retail chain.

The Andy Warhol Union Square scent will be launched in March in the U.S. at Bond No. 9 boutiques, Saks Fifth Avenue and museum gift shops. It will then be rolled out to 20 different markets a month later, including retailers Harrods, Harvey Nichols and Selfridges in the U.K. Bond No. 9 doubled its global distribution over the past year from 10 markets, and plans to launch the brand in additional markets next year.

According to industry sources, Union Square could generate up to $5 million in first-year wholesale sales volume.

As part of the Andy Warhol Union Square fragrance launch, Bond No. 9 has partnered with another of Warhol’s licensees, Robert Lee Morris, to create 400 limited edition Warhol-inspired sterling silver Flowers necklaces. The jewelry will feature a Warhol quote engraved on the back: “My favorite smell is the first smell of spring in New York,” as well as the Bond logo. Launching in time for Mother’s Day, the 36-inch necklace will be available with a 100-ml. bottle of the fragrance for $575. Not yet determined is how prominent a role jewelry will play in future Bond No. 9 projects.

“It’s a way to lift the brand with artistry in a way that satisfies customers,” said Rahme, who sees jewelry as a quickly growing business.

The Andy Warhol Foundation for the Visual Arts, located on Bleecker Street in the only building designed by Louis Sullivan in New York, foundation executives noted, hopes the long-term partnership with Bond No. 9 presents an opportunity to strengthen what the foundation stands for. The Warhol Foundation previously dabbled briefly in the fragrance business in the late Nineties with Cofinluxe, who acquired the license for Andy Warhol Perfumes in 1998.

“We wanted to work with a company that was creative and artistic, but what attracted us to Bond No. 9 was that it challenged the fragrance industry to do things differently,” said Michael Hermann, director of licensing at the Warhol Foundation, who has been with the foundation for more than a dozen years. “The partnership with them was synergistic since we’re both all about New York City. It made sense for a New York artist to be with a New York-centric fragrance company.”

Started in 1987, the nonprofit foundation has given out more than $200 million in grants — both through cash and art. According to Hermann, this year the organization will donate $11 million to other art organizations through art sales, investments and endowments. Last year, Warhol’s licenses generated more than $2 million. Previous partnerships include Burton snowboard apparel, Levi’s, Seiko and Royal Elastics footwear by Gwen Stefani.

To celebrate the launch of Silver Factory earlier this month, an olfactory ode to the pop artist’s foil-papered and silver-painted work and play space, Bond No. 9 cohosted a VIP shopping party with W magazine, a sister publication of WWD, and crammed over 400 guests into the NoHo-based perfumery’s flagship. Silver Factory is served up in Bond No. 9’s signature star-shaped bottle emblazoned with a graphic inspired by Warhol’s famous “Campbell’s Soup Can.”

Warhol Superstars and friends, along with celebrities who were on hand at the launch — including Geraldine Smith, Robert Heide, Ivy Nicholson and Robert Lee Morris — agreed that Warhol himself would have approved of the fragrance. Said Heide: “He would have loved the scent — and the attention.”

Silver Factory “serves the dual purpose of introducing the artist to a broader audience while generating funds to benefit The Andy Warhol Museum,” said Hermann. A portion of the sales from the evening were donated to the Andy Warhol Museum located in Pittsburgh.