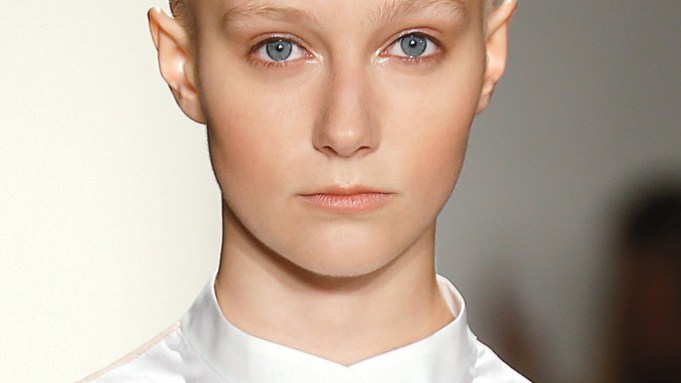 From classic to outlandish, a wide range of beauty looks characterized the New York spring collections.

The use of white ranged from ethereal to edgy. Of the look he created at Creatures of the Wind, Nars Cosmetics’ James Boehmer said, “It’s sort of a pinup girl surrounded by surreal landscapes,” while at Altuzarra, Tom Pecheux, working with MAC, described his vision as “fresh yet sophisticated.” When white was used in the hair, things got more avant-garde, as at Thom Browne, where Bumble and bumble’s Jimmy Paul was inspired by the idea of an insane asylum. “The look is kind of uniform in its insanity,” he explained.

Tan took a turn to terra-cotta on many runways, with a pronounced emphasis on the cheek. At Anna Sui, Cover Girl’s Pat McGrath created a Pre-Raphaelite luminous look, while at Ohne Titel, MAC’s Lucia Pica created a face she described as futuristic by combining jewel-toned shadows on the outer edges of the eye and cheekbones with Luna Cream Color Base down the center of the face. At Donna Karan, MAC’s Charlotte Tilbury was inspired by Seventies icons Marisa Berenson and Lauren Hutton, dubbing her look “expensive hippie.” Tom Pecheux, also working for MAC, at Peter Som, applied blush in Pleasure Model at the apple of the cheeks to contour. “It’s a very nude face,” said Pecheux. “Peter wanted something very fresh and kind of raw.”

NEXT: Orange Is Still the New Red >>

Orange Is Still the New Red

The classic red lip got a fresh twist this season in the form of orange. Makeup artists eagerly applied shades of carrot, tangerine and coral at numerous shows, including Revlon’s Gucci Westman, who layered Super Lustrous Lipstick in Carnival with ColorBurst Matte Balm in Mischievous at Rag & Bone. “The orange lip was a cool departure for the first-ever lip color at Rag & Bone,” said Westman. “The collection’s [pastel colors] called for a bright pop.” At DKNY, Maybelline’s Charlotte Willer applied Color Sensational Vivids Lipstick in Electric Orange and Neon Red for a result that was as charged as the brand’s 25th anniversary party later that night.

NEXT: The Pony Brigade >>

Ponytails are a New York staple, but this season was notable for the variety, be they embellished, disheveled, high, low, sleek or sideswept. The look was romantic at Honor, where James Pecis for Beauty.com strewed flowers in the hair so models looked as if they had just run through a field. “[The look] is cute,” he said. “It has a playful young feel.” With a nod to the Eighties at Rodarte, Odile Gilbert for John Frieda fashioned a wavy swoosh across the top, inserted an animal-print hairpiece at the back and gathered the rest into an elastic. “All the girls in the Eighties had this look,” she said. “Even Madonna was doing it.”