The scent portfolio mirrors the designer's blend of classic and modern elements. 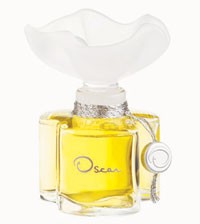 The designer entered the fragrance business in 1977 with Oscar, a scent that is still distributed globally, and over the years he’s added six others: Pour Lui, the first men’s fragrance, launched in 1980; Volupte, launched in 1992; So de la Renta, 1997; Oscar for Men, 1999; Intrusion, 2002, and Rosamor, 2004. A seventh, Ruffles, is no longer produced. Of these, Oscar and Rosamor are the most widely distributed.

“The strength of the brand is that it is like Oscar de la Renta himself: It is an extraordinary alchemy between classic and modern,” said James Ragsdale, vice president of classic brands for licensee YSL Beaute. “It’s a well-established, reassuring brand that also manages to keep up with the times.”

Ragsdale wouldn’t comment on the de la Renta beauty brand’s sales volume, although industry sources estimated that it does about $80 million at wholesale globally.

“Oscar brings a lot to the table,” he continued, adding that de la Renta is the YSL Beaute group’s only American designer brand. “Oscar has a very loyal following, and it gets animated every year to keep up with the times. That’s the solid base we use for launching the business. Then we update the [fragrance] with what Oscar is doing on the fashion.”

Globally, the brand is distributed in more than 9,000 doors. In the U.S., it is available in more than 2,000 department and specialty store doors, including Macy’s East and Macy’s West, Dillard’s, Marshall Field’s and Foley’s.

Part of that strength, he noted, comes from the consistent vision that has been implemented for the beauty brand.

“While the Oscar beauty brand has seen some changes in parent companies,” he said, referring to the Sanofi Beaute-YSL Beaute deal of the early Nineties, “there has always been a clear and consistent marketing plan in place for this brand, and it continues today. It is a luxury brand that is modern with a twist. While it is updated and animated, it remains true to itself, and consumers respond to that.”

Consumers also seem to appreciate the diversity of fragrances within the portfolio. The first Oscar scent is a fresh floral with notes of orange, coriander, basil, tuberose and sandalwood, and attracts “a classic woman,” said Ragsdale.

Intrusion, with its top notes of Sicilian bergamot, Chinese star anise and neroli softening into notes of peony, jasmine, gardenia and coriander, is more for an “edgy, contemporary woman.” Rosamor, the latest launch, is “more lighthearted,” with its top notes of Italian mandarin and pink lily of the valley; a heart of ylang-ylang, gardenia, Indian tuberose and rose, and a drydown of mysore sandalwood, vanilla and tonka bean.

Rosamor also takes inspiration from the designer’s Latin heritage, something none of de la Renta’s other scents do. “It has a much younger attitude [than my other scents] and there is an element of happiness and joy [inherent in the scent],” said the designer at the fragrance’s launch party last year. “Today’s woman is proud of herself, and is going out into the workplace looking great. Fragrance is a part of that package.”

De la Renta is hands-on in the development of his perfumes, which is another great strength for the brand, said Ragsdale. “He is very involved in their development and in the direction of his brand. Oscar is as effective in a boardroom as he is at the store level. He is a very charming guy, he has a clear vision for his brand — and he articulates it very well. He’s involved with the marketing mix, and he has a lot of fun with the brand.”

While Ragsdale wasn’t giving away his future strategy for the Oscar portfolio, he promised a “dynamic marketing plan” ahead. The brand will be animated in August with a new flanker, Oscar Violet, as well.