Getting Dolled Up With Gwen Stefani

Seldom has the term "doll-like" been so applicable as in the case of Gwen Stefani's September fragrance launch. 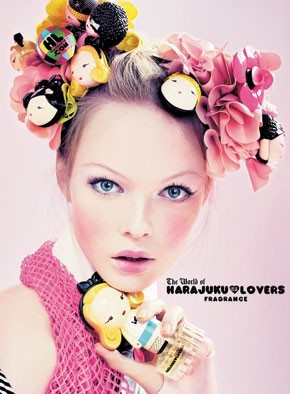 Seldom has the term “doll-like” been so applicable as in the case of Gwen Stefani’s September fragrance launch.

This story first appeared in the April 4, 2008 issue of WWD. Subscribe Today.

That’s when Stefani will introduce her new Harajuku Lovers collection. For the project, Stefani created dolls based on herself and her four real-life backup singers, Love, Angel, Music and Baby — and turned them into scent bottles.

“I didn’t think this project would actually come to life,” Stefani admitted to WWD. “The idea that Coty would let me do five different fragrances for Harajuku Lovers was a fantasy. [But] it really had to be five, because that’s what the world is. Each girl has her own personality and sense of style. We’re all saying something different with unique personalities.”

Stefani has long been fascinated by the whimsical style of girls in Tokyo’s Harajuku area — so much so that they have inspired her music, a streetwear apparel line, handbags and watches, to name a few.

That whimsy is reflected in the Harajuku Lovers bottles, which consist of two pieces: a glass base that holds the juice and hides the spray top, and a personalized doll that lifts off the base. Each doll is meticulously crafted, with a different mold and hand-applied detailing, down to the bows on Lil’ Angel’s dreadlocks. The outer box gives each doll’s backstory.

The project itself came together quickly, said Stefani. “So much had been done already with creating these girls — dreaming up the entire world while I was working on the first solo album, living the fantasy on tour — the actual fragrance selection wasn’t that hard,” said Stefani. “I was just so inspired that it came together really fast. It was a little bit easier than when I was creating the L.A.M.B. fragrance. This time it wasn’t just about me, so there was a little more freedom. And when you get to do five different things, you get to go in five different directions. You get a lot more space to choose.”

The scents are all inspired by Stefani’s views of her backup singers. Love is described as “sweet, caring, free-spirited and always off in her own little world.” Lil’ Angel is “constantly looking out for others,” but is no saint. Music is “always looking to make someone laugh” and is “charismatic.” Baby is “enticing in her frilly innocence.” (And, naturally, G is the leader of the pack.)

Lil’ Angel, a fruity floral by Givaudan’s Christophe Raynaud, has top notes of raspberry, cranberry, blackberry and pineapple; a heart of pear blossom, candied violet and sugared rose, and a drydown of lollipop accord, hinoki wood and crystal amber.

Music, a delicate floral by Honorine Blanc of Firmenich, has top notes of clementine and sparkling pear; a heart of jasmine sambac, sweet pea and honeysuckle, and a drydown of vanilla, skin musk and sleek woods.

Baby, a powdery musk by Firmenich’s Harry Fremont, has top notes of freesia, bergamot and white rose; a heart of orange flower, tiare flower and jasmine petals, and a drydown of white musk, soft woods, heliotrope, vanilla and violet.

G, a modern gourmand by Steve DeMarcado of Fragrance Resources, has top notes of crisp mandarin, fresh coconut and apple skin; a heart of jasmine sambac, soft freesia and magnolia vapor, and a drydown of coconut cream, white sandalwood and cottonwoods.

The scents will each be available in two sizes: $45 for 30 ml. and $25 for 10 ml. A coffret, which includes solid perfume versions of all five, will be on counter later this fall as a permanent addition to the collection, and will retail for $60. “They’re value-priced to encourage multiple purchases,” said Catherine Walsh, senior vice president of American Fragrances for Coty Prestige, adding, “While we’re not the first to launch multiple scents at once, I do believe that we’re one of the few to launch five extremely different scents at once.”

That position swims against long-held conventional wisdom in the industry that it is difficult to merchandise more than one fragrance introduction at a time at point of sale. However, Walsh firmly maintains that the novelty of the five figurines will be so compelling that consumers will be charmed into buying more than one.

In the U.S., the Harajuku Lovers collection will be sold in some 2,200 department and specialty store doors, including Macy’s, Nordstrom, Dillard’s and Sephora. The lineup will also be sold in 17 international markets, including Japan, the U.K., France, Australia, Germany and China. Worldwide, the scents will be in about 10,000 doors, said Walsh.

In the U.S., certain retailers — including Macy’s West — intend to install such fan-appealing features as 5-foot versions of the fragrance dolls and a photo booth where customers can take their pictures with the characters.

While Coty executives and Stefani declined to comment on sales projections, industry sources estimated that the collection would do upward of $30 million at retail globally in its first year on counter.

A print advertising campaign, shot by Craig McDean, will begin running in September fashion, beauty and lifestyle magazines. Stefani does not appear in the ads, purposely, said Walsh. “Harajuku Lovers is part of the world of Gwen Stefani — but it’s a completely different franchise than Gwen’s first fragrance, L,” said Walsh. “We wanted to make that clear. Each one of these scents has its own personality.”

Coty is also filming TV spots for the collection, although it is unlikely that they will be shown in the U.S., said Walsh.

Also key will be a comprehensive Web site, HLfragrance.com, intended to be an “interactive online experience,” said Leslie Oglesby, global director of marketing. The site will offer information about the fragrances and their creation process, as well as a scrapbook section, a style discussion board and downloadable tools and avatars, said Oglesby. It is expected to go live on Sept. 1.

Now that her five fragrances are finished, Stefani is considering a September runway show, although her newest project — baby number two with husband Gavin Rossdale — may interfere. “I’m hoping to do a show, but it’s right around when I’m due, so I’m not sure yet,” she said.

Given the success of Stefani’s first fragrance, she may end up heading into new beauty areas. “I would love to have a full L.A.M.B. beauty line one day,” said Stefani. “It makes sense. I’ve always loved doing my hair and makeup and getting all dressed up. When I have a party or an event to go to, getting ready is just as much fun as actually going out.”

But she certainly hasn’t forgotten her first love, music. “Right now I’m in the studio with the guys, working on a new No Doubt album, while working on spring 2009 for L.A.M.B.,” she said, adding that designing her apparel and accessories lines scratches a creative itch for her. “Music and fashion are both forms of creative and artistic expression for me. They’re similar in that they’re both never-ending collaborative art projects.”