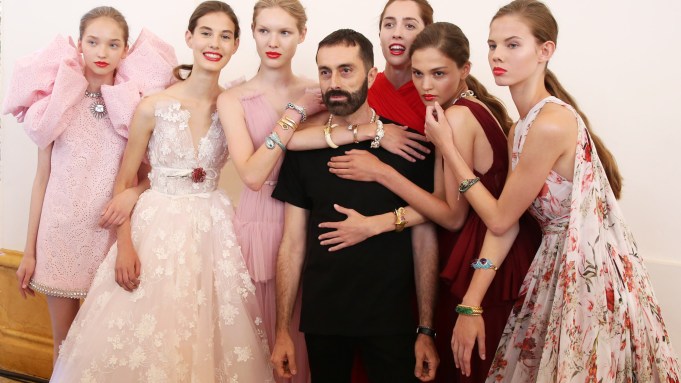 “When I was talking to Giambattista, he was saying ‘subversive romance.’ He wants the girls to feel quite poetic, but there’s a little bit of danger there as well,” said makeup artist Val Garland, referring to the house’s artistic director, Giambattista Valli.

“In terms of makeup, you see this beautiful skin quality; it is very innocent — childlike, even. But then you come to the mouth,” she continued. “And the mouth is like a rosebud. It’s like she’s been biting peonies. And we put a lot of gloss over the top, so it just looks quite sexy at the same time.”

Hairstylist James Pecis took a similar cue. “We wanted to keep all the girls really young and fresh-looking,” he said.

“We’re putting a lot of detail in the texture, the direction of the hair that goes back and how it crosses [there]. But it has to feel like a young girl pulling her hair back, and she has the perfect messy texture to it,” continued Pecis.

The main products he used were Oribe Maximista Thickening Spray and Swept Up Volume Powder Spray.