My Way from Giorgio Armani

“I believe that enriching experiences, capable of creating real progress, come to be through exchanges between cultures,” Armani told Beauty Inc. “The aesthetics and atmospheres of distinct countries are part of my imagination: I have always felt great curiosity for other cultures, which I have tried to get to know through travel.

“My Way condenses into a perfume my idea that new experiences and encounters change and enrich the personality,” the designer continued. “Add to this my love of the concept of timelessness. Being timeless for me is the highest quality. It does not mean abstracting yourself from the moment, but instead, capturing it and then sublimating it.”

Armani said: “It is an extremely subtle quality, which can be achieved, in part, by subtraction, by taking things away until you are left with the essence. I apply the same method to perfumery. My Way, with its motto ‘I am what I live,’ is a celebration of the intensely personal journey, of those experiences and those meetings with people that make us who we are.”

The timing is right to launch a new Armani scent, brand executives say.

It has one feminine fragrance pillar, Sì, which last year ranked seventh among prestige women’s fragrances globally and placed fifth in Europe, each up one notch versus in 2018.

“It’s important for Mr. Armani and the brand to show another facet,” said Véronique Gautier, global president Armani beauty at L’Oréal, the brand’s licensee. She suggested the two pillars would be very complimentary.

Despite globalization, there’s been a counter trend of erecting barriers and discrimination, and the coronavirus pandemic has exacerbated this, according to Armani. The designer called himself a staunch supporter of “métissage” — or the mixing and blending of peoples — “because progress is born from meeting and exchange,” he said.

Armani emphasized the importance of sharing significant ideas. “For example, I’m particularly interested today in the responsibility that we all have as inhabitants of this planet: responsibility toward the environment, which we should hand over as intact as possible to those who come after us,” he said. “In order to do this, we must genuinely engage with other cultures, whose wealth and diversity are an immense good to protect.”

Armani sketched My Way’s bottle and cap, reminiscent of a stone, blue like the earth viewed from space. A gold-colored band encircles that, meant to evoke the notion of a path, while blue fabric around the flacon’s neck winks to Armani’s fashions.

“This project encapsulates our vision and commitment to climate change,” continued Gautier.

My Way is a project that is integrally carbon-neutral. It’s a first step for Armani beauty to achieve carbon neutrality for all its products and reduce its carbon footprint by 25 percent more by 2025.

A contemporary floral, the fragrance contains a note of tuberose, a flower Armani adores, and other ingredients sustainably sourced, such as vanilla from Madagascar.

“Armani is committed to financing a program with an NGO in Madagascar for responsible, inclusive sourcing,” said Gautier.

Other notes in the fragrance created with IFF’s Carlos Benaïm and Bruno Jovanovic include bergamot from Calabria, Egyptian orange blossom, jasmines, cedarwood and white musks.

America actress Adria Arjona — of Guatemalan and Puerto Rican heritage, who spent her childhood on the road with her musician father — was chosen to front My Way. She’s appeared in “True Detective” and “6 Underground,” and will costar with Jared Leto in the Marvel movie “Morbius” next year. 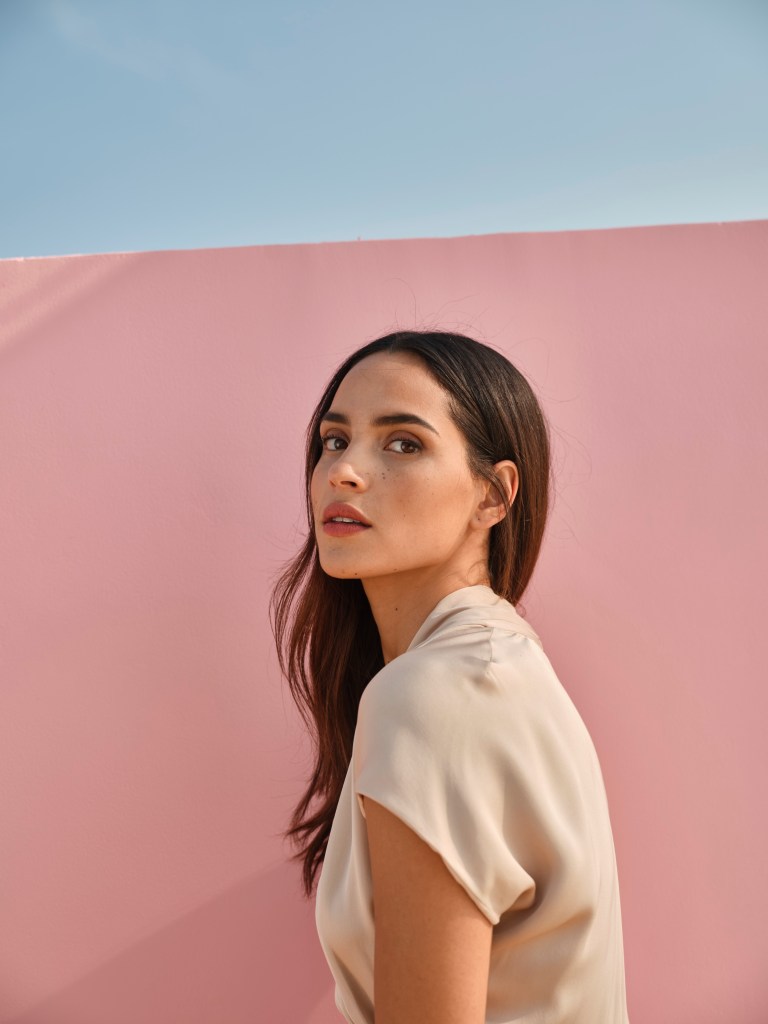 “I have never made a secret of my love for natural beauty free of artifice,” said Armani. “Adria Arjona, the face of My Way, perfectly reflects this ideal. Her story is written in the harmonious features of her face, in her smile, in her gaze. Her look has the pure charm of what is authentic. Furthermore, Adria is a curious traveler. She is someone for whom the saying ‘I am what I live’ really does hold true.”

For the campaign, Cristian Borillo and Martin Cespedes (aka Hunter & Gatti) lensed Arjona having true-life encounters, such as experiencing a sangeet ceremony in India or the festival of lights in Thailand. Spots were also filmed in the likes of Tokyo and Seville.

No images were retouched.

“There was no script,” said Gautier. “There is a very rich communication platform.”

Armani executives would not discuss projections, but industry sources estimate My Way could generate $220 million in first-year retail sale globally.

The scent will launch Aug. 10 exclusively on Armani beauty’s e-commerce platforms, followed by an on-counter rollout beginning Aug. 24 worldwide except for China, which is slated for 2021. TV advertising will go live on Sept. 6.

Whereas Sì is meant to channel a powerful, elegant, passionate woman, My Way is more about a free spirit.

“She is a young woman of today: intelligent, curious, free of prejudice, independent and capable of treasuring every life experience,” said Armani. “She is a citizen of the world. I love the idea of this woman, fiercely independent and brave, genuinely modern in her attitude, free and able to take on board any experience and encounter on her life’s journey.”

Over the past decade, Armani beauty’s business including women’s scents, makeup and skin care grew from generating less than 30 percent to now about two-thirds of its overall sales, or approximately 1.5 billion euros annually, according to industry source estimates.

The sources estimate Armani’s fragrance and makeup revenues are about on a par with each other. Skin care is a smaller business, with sales growing by double digits.