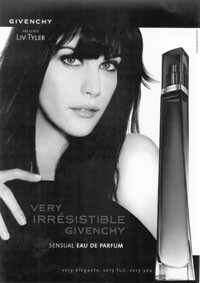 Matrix Re-brands, Broadens in Appeal to More Diverse Consumer Base

Peter Lindbergh shot the men’s campaign, which will begin running globally this fall; in the U.S., it breaks in September, noted Gilles Dougoud, general manager of Givenchy in the U.S.

The men’s ad features a flirty Tyler glancing over her shoulder, doing a double take after spotting model Boris Beynet on a crowded street. Both single and double-page spreads will be produced. In many instances, the campaign will run in dual-interest magazines alongside a new campaign for the women’s flanker, also featuring Tyler, said Dougoud.

The women’s flanker ad was shot by Mario Testino, who also shot the original Very Irresistible Givenchy women’s campaign. While the original Very Irresistible Givenchy ad featured a fully accessorized and made-up Tyler, the new ads running in the U.S. highlight the actress’ sporty side. Slated to begin appearing in September magazines, including In Style, Vogue and Glamour, the ad features a large black-and-white shot of a natural, elegant Tyler, alongside a large color visual of the fragrance bottle.

The new women’s juice “is more intense — making it more suited for wearing at night, or during the wintertime,” Dougoud said, noting that it is bottled in a pale violet version of the original pink bottle. “We know that a lot of current Very Irresistible Givenchy eau de toilette users will be seduced by the new fragrance. It is a bit stronger, more sensual and sophisticated. We think that the same woman will wear both fragrances, just at different times.” The original scent is an eau de toilette, while Sensual is an eau de parfum — making it more heady, he noted.

Concocted by International Flavors and Fragrances’ Dominique Ropion, Sensual is, like its namesake, a five-pointed aromatic floral whose chief notes include roses. But Sensual includes a special twist: a heart note of Liv Tyler Rose, a velvety rose note combined with green, apple and pear notes. The juice also includes notes of centifolia, peony, fantasia, emotion and passion roses, star anise, sweet-smelling grass, patchouli and vanilla. A 50-ml. bottle will retail for $62.

The men’s scent is a sensual green woody concocted by International Flavors and Fragrances’ Pierre Wargnye. Top notes are of grapefruit peel and mint leaf; heart notes are of sesame seed and mocha, and the drydown is of hazelnut wood and Virginia cedar. The 50- and 100-ml. eau de toilette sprays will retail for $45 and $58, respectively, in the U.S. Ancillaries include a 100-ml. aftershave lotion, $45, and a 75-ml. deodorant stick, $17.

The men’s bottle, designed by Parfums Givenchy’s artistic director, Pablo Reinoso, is a dark green ombre; its triangular glass is similar in shape to its women’s counterpart.

In the U.S., the men’s scent and the new women’s scent will be available in select Macy’s and Robinson’s/May doors at the end of July before rolling out to wider distribution in September. For the women’s juice, that will mean 2,000 department and specialty store doors by yearend. The men’s scent will roll out to 650 U.S. department and specialty store doors by yearend and enter a full distribution of 2,000 doors in 2006.

Dougoud declined to discuss sales projections or advertising budgets, although industry sources estimate that the men’s juice could do $15 million at retail in the U.S. in its first year, while the women’s flanker could do $7 million to $10 million at retail in that same period. Industry sources estimate combined advertising and promotional spending will be at $5 million.