The Internet Can’t Get Enough of Vagina-Scented Products

Between Goop's This Smells Like My Vagina candle and Erykah Badu's "Badu P--sy" incense, vagina-scented products are flying off the shelves.

Goop's This Smells Like My Vagina candle, $75, is currently sold out.

At the In Goop Health Summit in November, Gwyneth Paltrow unveiled a candle with a “beautifully unexpected scent.” With notes of geranium, bergamot and Damask rose, among others, the candle’s name claimed to smell like a vagina — though whose is unclear.

The This Smells Like My Vagina candle, $75, sold out in about an hour and a half, according to Douglas Little, founder of Heretic, the clean fragrance brand behind the candle and a handful of other Goop fragrances and scented products. The candle quickly became one of Heretic’s bestsellers — the New York Post’s Page Six even reported that Elton John bought “a lot” — and an Internet hit, prompting a variety of spin-off versions, including a penis-scented candle, priced at $100 as a statement on the gender pay gap.

“It’s the one time you want your vagina to go viral — and it went viral,” said Little.

Goop’s candle, though, isn’t the only vagina-scented product flying off the shelves. On Feb. 22, Erykah Badu opened her online shop BaduWorldMarket, which sells an assortment of hoodies, T-shirts, clogs, records, tabi socks and crystal-infused water bottles that range in price from $30 to $125. The buzziest product was a pack of 20 incense sticks, which, according to the web site, were made with the ashes of Badu’s own underwear.

In an interview with WWD, Badu confirmed that the product’s description is accurate. 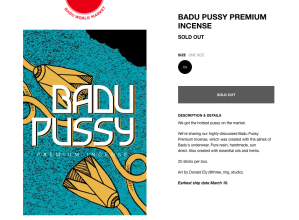 “There are lots of different organic ingredients — natural herbs, spices, oils — inside of the formula, and yes, that’s one of them,” said Badu. “We had to send a box of ashes to the incense maker in order to make it real. I have to say this: it’s the underwear I had on while I was ovulating. That’s important for you to know.”

In recent years, women entrepreneurs have been disrupting the sex-toy market, and Millennial female founders have been giving vaginal products an update, despite running into roadblocks advertising the products on social media. The rise of vulva-scented products (thank Goop’s Netflix series for the terminology), however, is a relatively new phenomenon.

Badu said in an Instagram video that the incense, which retails for $50, sold out of 500 packets in 19 minutes. Despite another restock, according to the video, the product is currently sold out on the web site. Badu is planning to restock the incense and build out an apothecary.

“The p–sy incense is the first product in my apothecary and I think that’s going to be one of the more important aspects of what I’m offering,” she said.

A post shared by THE UNICORN- 17 years ahead.. (@erykahbadu)

Asked how she decided to make an incense scented after herself, Badu explained that it was inspired by an “urban legend” regarding her relationships.

“There’s an urban legend in the community of hip-hop where I’m from that my p—sy is magic and it changes the people that I am with,” she said. “They look different, they feel different, they act different and they’re a lot smarter. I think everybody deserves a little bit of that, don’t you?”

The popularity of the product, she continued, is owed to the current cultural climate, which she described as “the age of the woman.”

“We are taking control of our imagery and even through the misogyny and patriarchal numbers that are done on us, we are still mothers, women, wombs, creators, we are here,” she said. “The p–sy is everything, the p–sy is first. Everybody recognizes that right now, I think. The other reason is because it’s my p–sy. Not to diminish anybody else’s, but there’s a different thing going on over here.”