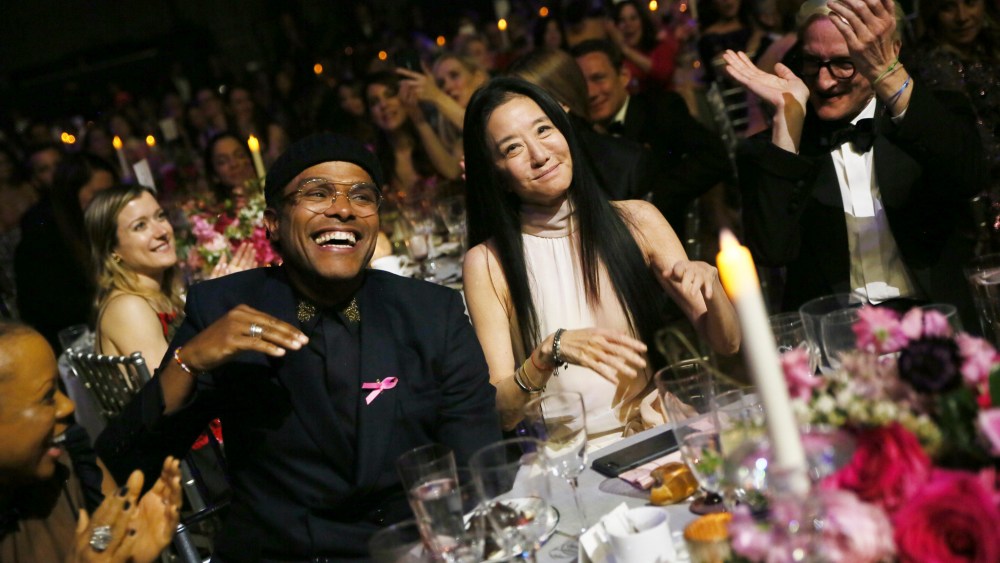 There was a sing-along on the Upper East Side on Wednesday night.

Guests at the Breast Cancer Research Foundation’s Hot Pink Party at the Park Avenue Armory on Wednesday were treated to the musical stylings of David Foster, who projected words from some of his biggest hits onto a big screen to create an evening of large-scale karaoke.

Foster name-dropped his famous friends, Céline Dion and Barbra Streisand, who were unable to make it, he said — but he had up-and-comers and fiancé Katharine McPhee, come on stage to sing to the crowd. He also Skyped in Kenny G and Josh Groban.

Elton John, a longtime performer at the event and friend to the late Evelyn Lauder, who started the foundation, was also unable to attend. He sent a video message and $50,000 in his stead.

“I basically make music that babies are made to,” Foster told the crowd, which included a large swath of the Lauder family, as well as influencers like Arielle Charnas and Blair Eadie, model Grace Elizabeth (wearing a creation from her good friend Brandon Maxwell, whose mother has breast cancer), host Elizabeth Hurley and designer Vera Wang.

The evening celebrated the BCRF’s 25th year, and noted the progress that had been made in that time. Jenny B. Fine, executive editor of beauty at WWD, presented Sonia Kashuk with the Roslyn and Leslie Goldstein Unsung Hero Award. This year’s gala raised $6 million.

“People come back again and again, and it’s so generous. They came initially probably because of a loss in their own family, but unfortunately year by year by year they probably meet more people being diagnosed — I certainly have,” Hurley said. “They just want to be here til the end, I think. Which we hope there will be.”

She was the evening’s host, a job she left her new eight-week old black cocker spaniel puppy, Ava, at home to do. She’s slated to film a new television show in the fall, and movie with a French director over the summer.

“All I can say is I ride a bicycle for rather a lot of it. It’s a really charming movie, it’s an independent,” Hurley said.