The star-studded series "Makeup and Friends" opens with Demi Moore.

The makeup artist and founder of clean makeup brand Westman Atelier has launched a YouTube series called “Makeup and Friends,” she told WWD exclusively. The series features Westman making up the faces of celebrity clients such as Martha Stewart, Cameron Diaz, Dakota Fanning and Demi Moore, who appears in the first episode. It is meant to portray “real tutorials,” said Westman, as well as real conversations with her clients and eventually, Westman’s efforts to transition Westman Atelier into a fully refillable brand.

“Video content has revolutionized the beauty industry,” said Westman. “It’s a learning curve ’cause for me, I need to be louder about the efforts we make for our products to be as clean as possible. [This series] isn’t a product push — I’m not taking that route. I want it to feel more transparent and to have a nice conversation that feels meaningful.”

YouTube’s beauty vertical has been a launching pad for personalities such as James Charles, Jeffree Star, Jackie Aina and Bretman Rock. It’s no secret that the platform has been upping its fashion ante via Derek Blasberg, head of YouTube’s fashion and beauty divisions, who has already launched channels for Naomi Campbell, Jennifer Lopez, Rosie Huntington-Whiteley and Victoria Beckham.

YouTube seems to be expanding its efforts into beauty — despite the endless amount of beauty tutorials already available. Charles, who attended the 2019 Met Gala as a guest of YouTube, will soon front a forthcoming YouTube Originals beauty competition series. WWD previously reported that Shane Dawson and Jeffree Star’s makeup collaboration earned $54 million in Media Impact Value, the bulk of which came from the pair’s YouTube series.

When it comes to beauty, there is equal demand for product and content.

“What’s great about YouTube is pulling the curtain back on some of the biggest names in the industry and showing why their work is so special,” said Blasberg in a statement. “That’s what I love about this new series with Gucci.”

YouTube, however, isn’t the only platform building beauty muscle. Later this year, Huntington-Whiteley will produce and host a Quibi series on the beauty industry.

“I wanted to pitch this idea to Quibi because I felt that it was going to be the right platform to take the content that I’ve been producing with Rose Inc. [her web site] to another level,” she told WWD.

Netflix, too, is making a push for beauty content. The opening episode of its “Broken” series explores beauty’s rampant counterfeit issue and last week it debuted “The Goop Lab,” a six-part series filmed in partnership with Goop, Gwyneth Paltrow’s lifestyle and wellness company.

“The Goop Lab” follows various members of Goop’s staff as they try alternative wellness practices first-hand. Paltrow’s presence is kept at a minimum. Goop instead chose to highlight a handful of its hundreds of employees. The series, said Goop’s chief content officer Elise Loehnen, who stars in it, aims to “tell some deeper, bigger stories that people would need to see to understand.”

“Beauty bloggers have led the way for creating beauty video in a highly scalable way,” said Loehnen. “Goop has always operated as a whitespace brand. From the day [Paltrow] started it in her kitchen as a newsletter, it’s always found what’s missing rather than trying to do what already exists. The world doesn’t need more beauty tutorials. There are so many excellent ones out there.” 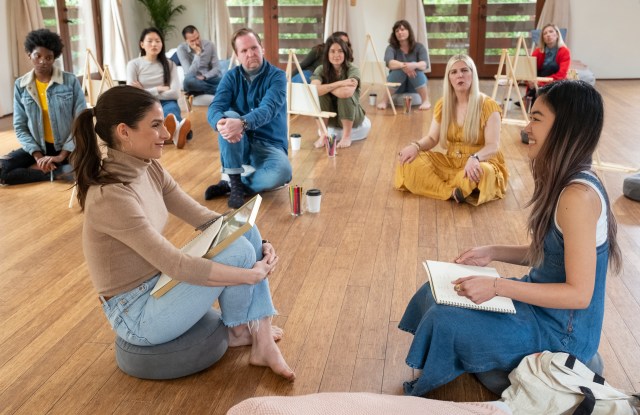 A still from Netflix’s “The Goop Lab.”  Adam Rose/Netflix

The series, which officially launched Jan. 24, has drawn much social buzz, though the Goop team has yet to measure whether views have translated to web site traffic — or even sales. One of the most-talked-about moments emerged from the third episode, which documents a visit to Betty Dodson, a 90-year-old sex educator. That episode shows multiple uncensored vaginas — “vulvas,” as Dodson clarified in the episode — and Carlin Ross, a member of Dodson’s team, pleasuring herself on camera.

Asked how Goop convinced Netflix to show that level of uncensored content, Loehnen said it actually didn’t take much convincing at all. The series campaign image of Paltrow standing inside of a structure that resembles a vagina is further indication that Netflix fully bought into the episode.

“We just shot it and presented it to [Netflix], then we left it with them,” said Loehnen. “They had many internal conversations up and down the organization, and we made a few changes that made the episode stronger. They had to metabolize it, but they came out and were like, ‘We believe in this and want to do it and it’s never been done and we’re excited to do it with you.’ We thought it might be a fight, but it wasn’t.”

It’s unclear whether Goop will film a second series with Netflix. Prior to working with the streaming giant, Goop received multiple television show offers, said Loehnen. She doesn’t, however, see “The Goop Lab” continuing on forever.

“We’ll see based on what the appetite is for the show,” said Loehnen. “I don’t think it’s the sort of show that can run forever because a lot of things we do aren’t particularly visual. But based on how it does, hopefully we’ll do more.”