By Brid Costello and Pete Born on June 3, 2005
View Slideshow 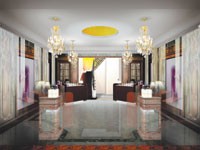 PARIS — Haute couture may be practiced by an ever-decreasing circle of designers, but haute perfumery is starting to relive its glory days here.

Offering a personal touch in a high-glamour locale helps set a brand apart in today’s fine fragrance market, which has lost its luster due largely to the never-ending flood of new eaux.

For Guerlain, the refurbishment of its flagship at 68 Avenue des Champs-Elysees, which was first opened in 1914, is considered an opportunity to fully express the brand’s values in one location.

“It’s not a museum, not a place for training — it’s not just a concept. It’s a living space, a boutique, a place where we can do many things,” said Renato Semerari, Guerlain’s chief executive officer. “It is a boutique that will properly speak about luxury perfumery.”

He noted that, through the renovation, Guerlain plans to focus the spotlight on its perfume patrimony through the store’s architecture, product innovations and emphasis on service.

On the ground floor will be the boutique, replete with marble floors and fixtures. An opening in its ceiling reveals a chandelier, which hangs from the second-floor mezzanine ceiling. A staircase leads to that story, which features a gold-accented hallway with undulating walls, where the brand’s fragrances are showcased.

On the store’s windows will hang rows of beads that act as curtains and resemble drops of rain or scent.

A spa is located on the third floor, which boasts 10 treatment rooms, including one for VIPs and two for water-based treatments. Guerlain beauty coaches will be on hand to offer advice and to give massages using a technique specific to Guerlain. The spa will open its doors in July.

The mezzanine level is in part dedicated to Guerlain creations of yesteryear. A number of scents will be plucked from the brand’s archives and reworked by Jean-Paul Guerlain for visitors to the store to discover. Each will be set on its own display unit and packaged in an engraved glass bottle.

There also will be fragrances from the past that will be available for purchase. The first to be reissued as limited editions will be Le Mouchoir de Monsieur, for men, and La Voilette de Madame, for women, first introduced in 1904. While Le Mouchoir de Monsieur is actually available today, both fragrances will be repackaged in numbered Art Nouveau-style bottles. The eaux de toilette will sell for $979, or 800 euros at current exchange, per 100 ml.

Also in the fragrance room will be a scent organ and fountains, where customers can have their Abeille, beehive-shaped Guerlain bottles, refilled with a chosen scent.

For those eager for the full custom service, made-to-measure scents are on offer. Sylvaine Delacourte, head of fragrance development at Guerlain, will be charged with orchestrating the creative process and guiding customers in their selections. The process takes several months to complete and requires numerous one-on-one meetings with Delacourte.

However, for consumers not willing to wait so long for a scent to call their own, Guerlain will have on hand a set of six Private Collection fragrances — each from a different olfactive family. Once someone buys one of the scents, it becomes theirs exclusively, and Guerlain replaces it with another new fragrance.

Numerous other products will be introduced exclusively to the store and will later be rolled out to other Guerlain points of sale. Among them are a trio of fragrances — Rose Barbare, by Quest’s Francis Kurdjan; Angelique Noir, by Givaudan’s Daniele Andrier, and Cuir Beluga, by International Flavors and Fragrances’ Olivier Polge. They will sell for $171, or 140 euros, per 100-ml. eau de parfum spray. Also in the works is a children’s scent, called Baby Guerlain. There also will be a line of scented products for the home, including candles, soaps, room sprays and incense, which will range in price from $43, or 35 euros, for a pack of four soaps, to $73, or 60 euros, for one scented candle.

To fete the refurbishment of the Guerlain flagship, Jean-Paul Guerlain concocted a limited-edition fragrance, named Plus Que Jamais Guerlain (More Than Ever Guerlain). It will retail for $318, or 260 euros, for a 60-ml. eau de parfum spray.

“When I create a fragrance, I try to remember a moment of perfect happiness,” said Guerlain in a press statement. “The idea is to forge a passionate bond between a woman and her fragrance. Their love affair is expressed in floral, chypree or oriental notes. Plus Que Jamais Guerlain is my new parfum d’amour [fragrance of love].”

The scent includes notes of Calabrian bergamot, Tunisian neroli, ylang-ylang, jasmine, iris and Bourbon vanilla. Sixty-nine limited-edition bottles of extract will be available in a 500-ml. Baccarat crystal flacon, while the eau de parfum will be in a smaller, 60-ml. spray version.

Jean-Michel Duriez, master perfumer of Patou, and Gerd Finke, marketing director for the Patou, Lacoste and Yohji Yamamoto brands, are offering a tailor-made fragrance service out of Patou’s boutique and laboratory, which opened in October on Paris’ 5 Rue de Castiglione. Duriez, who joined the house in 1997 after working as a perfumer at Kao for eight years, has created at least half a dozen perfumes for the three brands, including Enjoy for Patou in 2003.

Duriez now is focusing on Patou, he said, and has launched the made-to-order program that draws upon a history of couture perfumery dating back to 1925. Duriez said he works personally with clients in designing their own private fragrances. The process can take six months to a year, he said, since it is a process of discovery and accommodation.

“She needs the time to get along with the fragrance,” said Duriez. “I am completely devoted to the project.”

The amount of time and intensity explains the price, which weighs in at $51,400, or 42,000 euros. For this, a client has exclusive use of the perfume, while the house retains ownership of the formula. The price tag includes the fragrance in three bottles — a purse spray, a regular-sized bottle and a 90-ml. Baccarat crystal flacon. Refills later can be obtained at regular market prices.

Due to the labor-intensive nature of the project, the number of clients is being limited to eight or 10 a year.

“We don’t want to make the business purely for money,” he added. “We want to bring back the spirit of couture.”